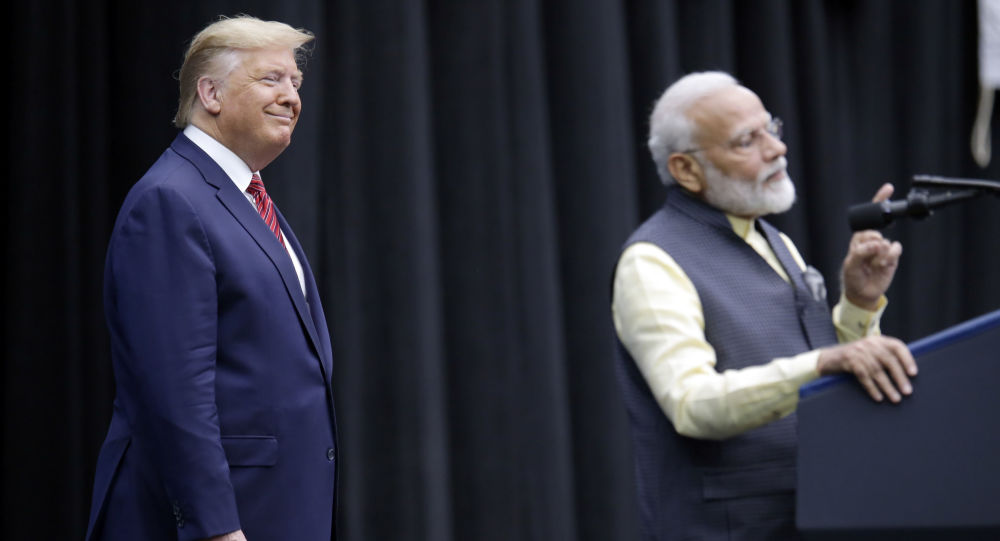 WASHINGTON (Sputnik) - The US has refused to exempt India from steel and aluminum tariffs. In June 2019, President Donald Trump removed trade privileges for New Delhi under the Generalized System of Preferences (GSP), affecting over $5 bln worth of Indian duty-free products. India has retaliated by slapping tariffs on 28 US goods.

Trump said he may sign a trade agreement with India during his upcoming visit to the country at the end of this month.

"We might do something, we'll see, if we can make the right deal, we'll do it", Trump told reporters on Tuesday in the Oval Office.

The White House said that Trump and Modi conducted a telephone conversation over the weekend and agreed the US president’s visit would further enhance the strategic partnership between the United States and India.

© REUTERS / Danish Siddiqui
US Demand to Lift Curbs on E-commerce Giants Unacceptable, Says Group Linked to India’s Ruling Party
While the US and India reportedly have bilateral trade to the tune of more than $140 billion, the Stratfor geopolitical intelligence consultancy has said disputes over trade, immigration and technology have strained the relationship, prompting the need for a trade deal.

Washington has also cracked down on the issuance of H-1B visas in the tech sector, hitting domestic giants such as Google, Microsoft and Amazon, as well as Indian consulting firms like Tata, Wipro and Infosys that have substantial operations in the United States, providing IT professionals from India.

Under the Trump administration, the US has been actively entering into tariff wars with other countries of the world. China is currently the main adversary, but Washington has repeatedly expressed dissatisfaction with the terms of trade with EU countries.