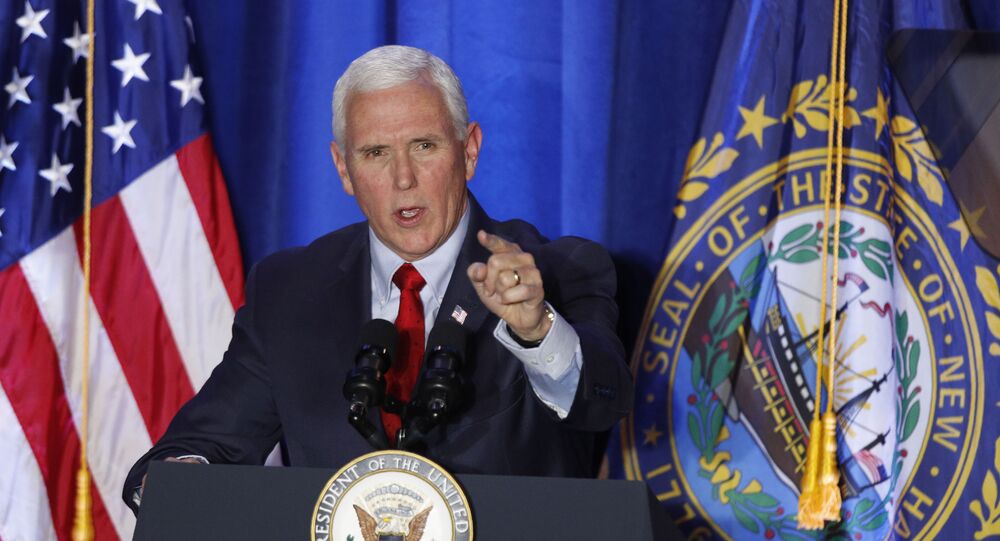 US Vice President Mike Pence on Monday attended a 'Cops for Trump' event in Portsmouth, New Hampshire, a state which Trump lost to Dem candidate Hillary Clinton in 2016. The political rally took place on the eve of the first nation's primary presidential election of the 2020 campaign.

The event was marked by an interruption as, moments after Pence began his stump speech, a group of women at the event together raised posters, chanting "Trump endangers Jews". Campaign security quickly moved to detain and escort the activists from the event but not before the incident was video recorded, instantly going viral on social media.

BREAKING: Protests break out While @VP Mike Pence took the stage at the #CopsforTrump event. A group of women sitting in the crowd jumped up with signs and started screaming “Trump endangers Jews” #7News They have been removed from the building pic.twitter.com/UPsgT5qqUu

​Trump's controversial rhetoric and his foreign policy moves have consistently come under scrutiny as media outlets and political activists blame the president for fueling anti-Semitism. Most recently, Trump comments in December 2019 sparked a backlash as he addressed the annual Israeli-American Council (IAC) National Summit in Florida.

© AP Photo / Alex Brandon
Ivanka Trump Tweets Condolences in Wake of Hanukkah Stabbing as String of Attacks Targets Jews in US
The US president at the time stated that some American Jews did not “love Israel enough”. The controversial remark quickly prompted outrage and instantly went viral on social media. The president's administration has denied that Trump encouraged anti-semitism, insisting instead that his aim is to unify the United States.

Trump reportedly remains popular in Israel. The US president has delighted Israelis by acknowledging Jerusalem as the Israeli capital and relocating the US embassy to the Old City, while also supporting Israeli sovereignty over the Golan Heights.

Most recently, Trump unveiled a Middle East peace plan intended to resolve the decades-long conflict between Israel and the Palestinians via a two-state solution. According to the document, Tel Aviv will extend its sovereignty in the West Bank and the Jordan Valley and retain Jerusalem as its undivided capital. The Palestinian Authority would double its current territory and receive $50 billion in investment cash in an attempt to spur the local economy, according to the document.