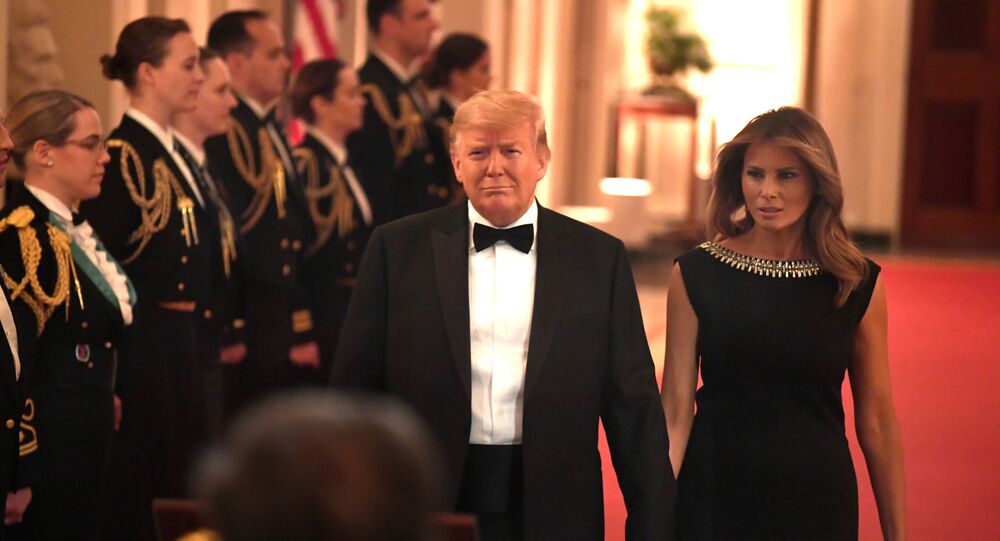 The Governors’ Ball is an annual event traditionally hosted by the president and first lady that welcomes the heads of all 50 American states, who arrive at the White House in order to share the company of their colleagues and the US commander-in-chief. But this year, Donald Trump prepared some surprises.

On Sunday, US President Donald Trump hosted the Governors’ Ball at the White House, kicking off the evening with praise for his wife and co-host Melania Trump, whom he thanked for the “beautiful job” she did in preparing the event.  The POTUS also minced no words in complimenting US Vice President Mike Pence, whom he called a “fantastic person”, as well as the state governors themselves that, according to Trump, had done “a tremendous job”, despite not always sharing the same views as the president.

“We argue a little bit but 90% of time we get along”, Trump said during the opening speech, calling his guests “an incredible group of people”.

“So I just want to congratulate you on having done, in all cases, a great job. Most of the states, almost everyone, has set a record. You’ve had a record — virtually every state”, the POTUS continued, while also taking some credit for recent developments in the country.

“It’s not easy being governor. And it’s — you just look at the way our country is doing: We’ve never done as well as we’re doing right now”, Trump argued.

However, there were also some surprises in store for the governors, as the president proposed that instead of just engaging in small talk, they could directly approach him over the course of the evening with their ideas, questions, and suggestions – something that has never happened before.

The ball, which coincided with the Oscars ceremony this year, attracted many followers on social media, as videos and photos from the event emerged online. Many users rushed to Twitter to point out the elegance of the party and her hosts, including Melania Trump, who wore a gorgeous black gown for the occasion.

A beautiful evening at the @WhiteHouse with our nation's Governors @NatlGovsAssoc and their spouses! #GovernorsBall2020 pic.twitter.com/szM9Os7nUg

Beautiful !! What a classy touch for the Governor’s ball which took place tonight at the WH ! God Bless America🇺🇸 https://t.co/ONpVfJzdmQ

Now that’s an evening to celebrate !! Much better than an Oscar party ! POTUS /FLOTUS🇺🇸🇺🇸

Looking gorgeous as usual, FLOTUS! And that guy you brought to the ball looks pretty good too.

Beautiful dinner , Beautiful wife , great company , you deserve it Mr President, you are working very hard for America , and we feel safe that you are there for us , Thank you :)

Despite the festive mood and praise surrounding the event, some shade was also thrown at Melania Trump and what are perceived as her frequently unfriendly facial expressions when near her husband, with netizens speculating about the current state of the couple’s relationship following FLOTUS’ grin during the president’s speech.

How would you describe the look on Melania’s face? pic.twitter.com/0RDkJCL6A3

Several twitterians also pointed out that the White House is known for organising not only black-tie events, but also more informal gatherings, which have in the past even included deliveries from McDonalds.

Did you all have hamburgers & cold fries!? 🤷‍♂️

where are the Big Macs?

Earlier, Melania Trump, who was behind the scene of the evening’s preparations, shared some throwback shots from past iterations of the event. She is also soon expected to host several fundraiser meetings for Trump’s 2020 campaign this spring, the donations for which will go to the “Trump Victory” project.