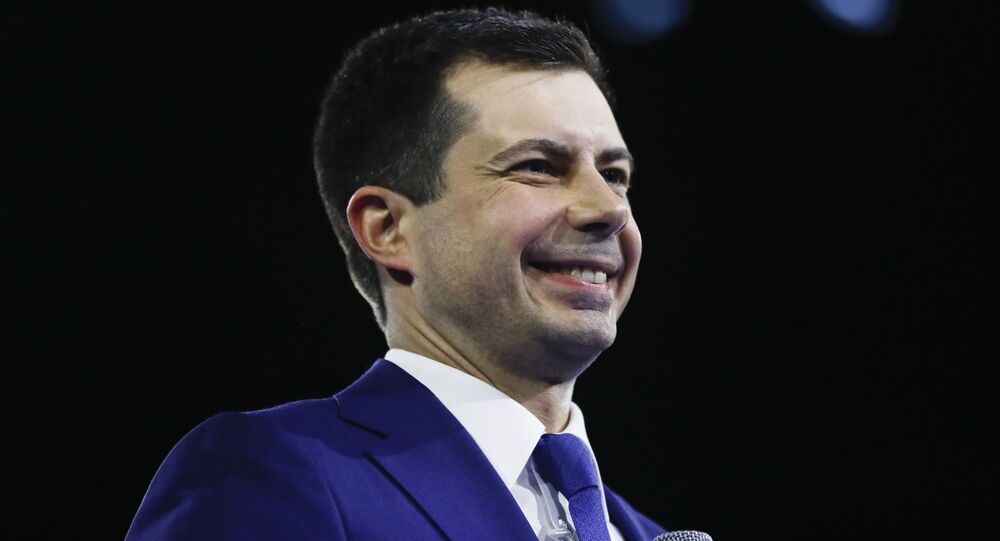 Since former mayor of South Bend, Indiana and contender for the presidential nomination from the Democratic Party Pete Buttigieg emerged as the winner of the Iowa Caucus, he has been under even closer scrutiny by the American public and his Democratic rivals.

Pete Buttigieg, a candidate for the Democratic nomination in the 2020 US presidential election, landed in hot water over the weekend after his campaign published several CNN town hall clips from his Thursday speech at Saint Anselm College, editing them with fake applause and laughter.

One year ago, @PeteButtigieg called on us to build an alliance among generations to make sure the future really is better than the past.

“Statistically, we run the risk of being the first generation in American history to actually be worse off economically than our parents if nothing is done to change the trajectory of this economy”, Buttigieg said during the event.

“To me, that is not just a concern for our generation, it's a concern that calls on us to build an alliance among generations to try to make sure that the future really is better than the past”, he added,  prompting laughter and applause according to the published version of the clip.

The apparent difference between the original footage featuring the presidential hopeful speaking about the financial issues of the current American generation was flagged by the Center for Popular Democracy Action (CPD Action), an organisation openly endorsing Bernie Sanders. The advocacy group published two versions of altered and unedited footage from the CNN town hall with the hashtag #SneakyPete, suggesting that Buttigieg’s remarks did not actually inspire any applause at that exact moment. The applause occurred only 10 seconds later when he finished his speech and the event’s moderator took the floor.

The findings have met with different reactions among Twitter users, with some netizens expressing outrage at the Buttigieg campaign’s apparent “cheating”. Many, however, noted that the clip did not actually provide any fake content and was just a teaser for the town hall speech in a shorter version.

Just shows that he’s fake. He isn’t genuine. Write him off as an empty suit and back someone else

Applause differences? This does not seem to be a serious cause for concern to me.

STOP. This is a teaser ad. The entire point was greeted with applause. They just cut it shorter. GEEZ!

Nevertheless, many netizens were not impressed by Buttigieg’s answers in general, noting that it just resembled a “word salad”.

He likes to use big words and a lot of words but doesn't say anything with substance. He is useless and he would lose badly against Trump. #MayorCheats

That was the most vacuous world salad ever.

He literally said nothing of consequence and laid out no plan or policy whatsoever.

CPD Action later shared another edited version of a Buttigieg Q&A from the CNN town hall, provoking some more reactions from the public.

Did you see our first exposé of @PeteButtigieg campaign altering a #PeteOnCNN video to fake more voter support?

Well here is a second!