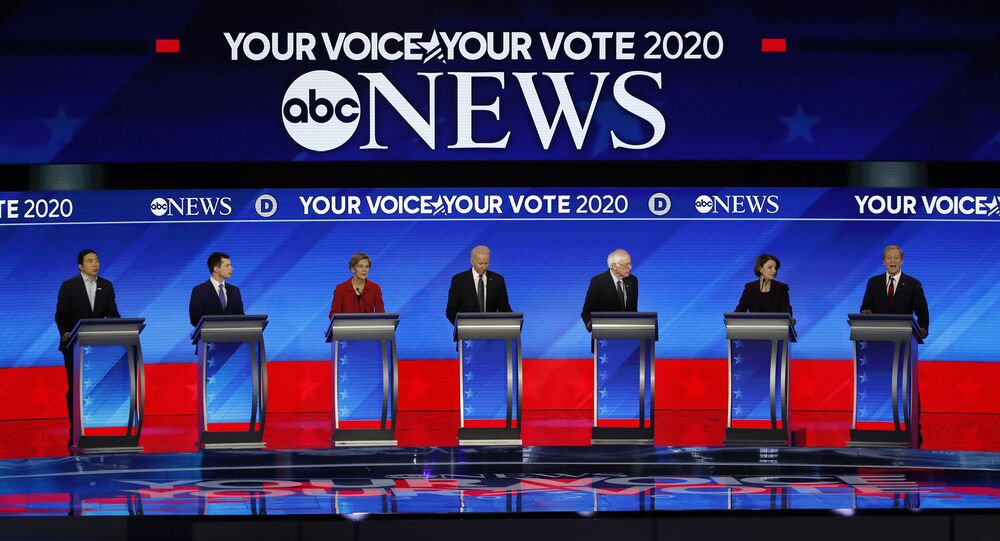 'Take Him Down on the Economy, Stupid': Democrats Hold First Post-Iowa Debate

After a vote-counting fiasco at the Iowa caucuses, the Democratic presidential candidates went on stage Friday night in New Hampshire ahead of next week's primary, in a battle over who has the best chance to beat US President Donald Trump in November.

Buttigieg, who emerged as the winner in Iowa, took incoming fire on electability issues from former Vice President Joe Biden, who questioned whether the young Democrat has the political background necessary to prevail over Trump.

“He’s the mayor of a small city,” Biden said of Buttigieg, before listing his major policy accomplishments as a senator and as Barack Obama's vice president, and then turning back to Buttigieg, "Mayor Buttigieg is a great guy and a real patriot," Biden said. "[He] has not demonstrated he has the ability to, and we'll soon find out, to get a broad scope of support across the spectrum, including African-Americans and Latinos."

Biden, who was long seen as the frontrunner before the Iowa caucuses, also lashed at Senator Bernie Sanders, who emerged second in Iowa by a narrow margin, noting that the way in which Sanders acts might make him an easy target for Trump.

"The president wants very much to stick a label on every candidate," Biden said. "Bernie’s labeled himself - not me - a democratic socialist. I think that’s the label the president's going to lay on everyone running with Bernie if he's the nominee."

Sanders in return noted "it doesn't matter what Donald Trump says," pointing out that Trump will attack any Democratic candidate regardless of who it will be in the end.

Buttigieg and Sanders also clashed over their respective campaign styles, with the ex-South Bend mayor characterizing the self-labelled democratic socialist's politics as "my way or the highway."

Buttigieg: We have to reject politics that are "my way or the highway"

Stephanopoulos: "Are you referring to Sen. Sanders?"

He also responded to Biden, noting that he is “interested in the style of the politics we need to put forward to actually finally turn the page” on Trump’s presidency. Biden went on the defensive, saying that he didn’t know what about the past of Barack Obama and Joe Biden was so bad.

The debates then refocused on health care. Senator Elizabeth Warren did not engage, instead speaking broadly about the need to lower prescription drug costs, rather than taking a proactive stand as she did during the previous debates.

Steyer, one of the underdog candidates in these debates, emphasized the importance of the economy in response to Sanders telling his fellow candidates that they cannot, "nibble around the edges," in order to get radical change like "Medicare-for-All," delivering one of the most memorable lines of the evening.

"He’s crowing about it every day, and he’s going to beat us unless we beat him on the economy, stupid," Steyer said, in a reference to ABC moderator George Stephanopoulos' time working for former President Bill Clinton, who adopted that very slogan.

At another point, entrepreneur Andrew Yang cautioned Democrats against making their arguments all about the president.

“Donald Trump is not the cause of all of our problems and we're making a mistake when we act like he is,” Yang said. “He is a symptom of a disease...It is our job of getting to the harder work of actually curing the disease.”

On foreign policy, Steyer, Buttigieg and Biden got into a three-way dispute that ended with both Steyer and Biden raising their voices.

Buttigieg argued that Biden had shown bad judgment when he voted for the use of force authorization that allowed former President George W. Bush to start the Iraq War. The former mayor added that the problems of the new decade will require a new perspective from the commander-in-chief.

Biden acknowledged anew that his vote in favour of the war authorization as a senator was a mistake, while Sanders said his Senate vote against deploying troops was proof of his judgment on national security issues. Buttigieg, who was in college at the time and later served in Afghanistan, said he would have opposed the war, too.

Notably absent from the debate was Michael Bloomberg, a billionaire former mayor of New York, who is not competing in New Hampshire but has been assembling a formidable campaign operation in later voting states. Although Bloomberg has been ascending in national polls, he has been funding his own campaign and not taking donations, so he failed to meet the donations criteria for the debate.