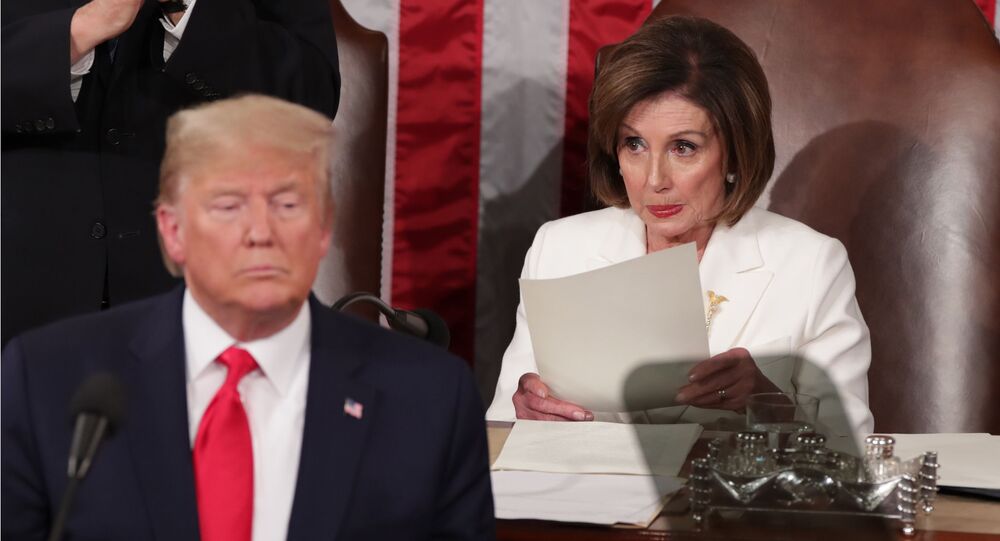 Top Republican lawmakers are attempting to get Democratic House Speaker Nancy Pelosi penalised after she visibly tore up a copy of US President Donald Trump's speech at the end of his State of the Union address.

House Judiciary Committee member Matt Gaetz said on Wednesday while speaking on FOX that he intends to file ethics charges against House Speaker Nancy Pelosi, over what he described as a "temper tantrum" after President Trump's State of the Union address.

"[Pelosi] disgraced the House of Representatives, she embarrassed our country and she destroyed official records. The law does not allow the Speaker of the House to destroy the records of the House and the rules of the House do not permit some little temper tantrum just because you don't like what the president of the United States says" he said.

"The Democrats really brought the heat down on him."

"By the way, Joe Wilson was right. We ought to apply the same standards to the Democrats that they want to apply to us and there will be an ethics investigation to Nancy Pelosi and we will start the ball rolling to have her censured", he added.

He said he intends to file the charges with the House Ethics Committee on Thursday.

Gaetz said that he is one of many Republicans tired of the double standards practiced on Capitol Hill, citing the case of Rep. Joe Wilson, a South Carolina Republican who was reprimanded in 2009 for yelling out "You lie!" towards then-President Obama over the healthcare coverage of illegal immigrants.

Rep. Lee Zeldin, who is one of a number of other Republicans who are cosignatories to a privileged resolution by House Appropriations Committee Ranking Member Kay Granger, R-Texas, formally dissaproving of Pelosi's actions, joined Gaetz on the program.

"From the inside out, Nancy Pelosi has been a poison", Zeldin said.

"She is now poisoning the House of Representatives and Congress and our country because they start off with her getting rolled by her far left, which has basically taken over the Democratic Party", Zeldin added.

He also accused the lawmaker of having "some real impulse control problems".

Nancy Pelosi should be ashamed of herself!

It’s okay to disagree with President Trump, no one is forced to like him. But to tear up his State of Union speech at the House of Representatives is just disgraceful.

​The interview comes following US President Donald Trump's 2020 State of the Union address, which saw House Speaker Nancy Pelosi visibly tear up her copy of his speech.