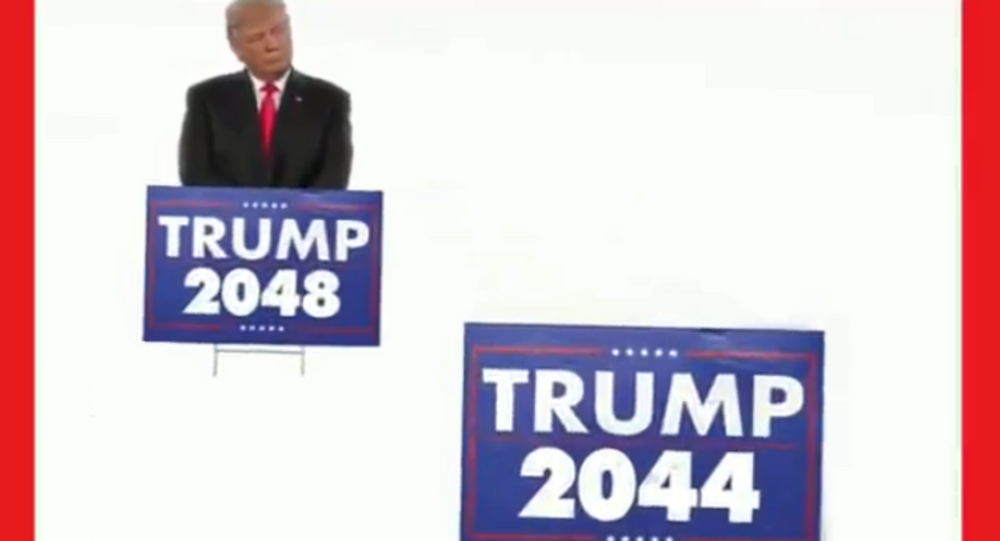 US President Donald Trump celebrated his acquittals in the Senate by tweeting a doctored video clip which suggested he would be president of the US "4EVA."

The US president's Twitter account issued a tweet Wednesday afternoon which solely contained a video clip which used an October 2018 TIME Magazine cover on "How Trumpism Outlasts Trump."

The US president followed up the tweet with an announcement of a 12:00 p.m. local time public address in which he will speak on the results of the Senate impeachment trial.

Several minutes prior to the social media post, the US Senate acquitted Trump on both impeachment articles: abuse of power and obstruction of Congress.

Former Secretary of State and failed 2016 Democratic presidential nominee Hillary Clinton also commented on the matter, suggesting that the 52 GOP Senators who voted to acquit Trump on his abuse of power charge violated their oath.

"Moments like this are what the Senate was made for. The Framers knew the country would need a firewall to keep partisan flames from scorching our Republic," Senate Majority Leader Mitch McConnell (R-KY) said on social media, reiterating remarks made prior to the Senate vote. "So they created the Senate. Today, we will fulfill this founding purpose."

Republican Senator Mitt Romney (R-UT) was the only GOP lawmaker to vote to convict Trump on his charge of abuse of power. However, Romney assisted Republicans in getting a unanimous vote for acquittal when it came to the obstruction of Congress charge.

Speaking on Romney's decision to break rank on the abuse of power vote, McConnell expressed that he was both "surprised" and "disappointed" in the Utah senator, but also acknowledged that he was "largely supportive of" the GOP's agenda, according to a tweet from CNN's Kaitlan Collins. Fox News' Chad Pergram reported via social media that the majority leader asserted that impeachment "is a colossal political mistake" and "a loser" for Democrats.

The White House Office of the Press Secretary issued a statement declaring that the Senate vote conclude the "sham impeachment attempt concocted by Democrats" and has resulted in the "full vindication and exoneration of President Donald J. Trump."

"Only the President’s political opponents – all Democrats, and one failed Republican presidential candidate – voted for the manufactured impeachment articles," the statement read, making reference to Romney's 2012 presidential campaign.

"The President is pleased to put this latest chapter of shameful behavior by the Democrats in the past, and looks forward to continuing his work on behalf of the American people in 2020 and beyond."

Senate Minority Leader Chuck Schumer (D-NY) argued that the refusal to allow witnesses to testify before the chamber invalidated the trial as a whole.

“My guess is that in their heart of hearts there were a number of Republicans who felt differently than how they ended up voting," Senator and Democratic presidential candidate Bernie Sanders (D-VT) said of the GOP.

In a statement issued following the acquittal vote, US House Speaker Nancy Pelosi (D-CA) stated that both Trump and Senate Republicans "normalized lawlessness and rejected the system of checks and balances of our Constitution."

"Sadly, because of the Republican Senate’s betrayal of the Constitution, the President remains an ongoing threat to American democracy, with his insistence that he is above the law and that he can corrupt the elections if he wants to," Pelosi continued. "The House will continue to protect and defend the checks and balances in the Constitution that safeguard our Republic, both in the courts of law and in the court of public opinion.  Democrats will continue to defend our democracy For The People.”

Wednesday concluded the monthslong impeachment process of Trump, which began in September 2019 and pertained to accusations of the US president withholding military funding from from the Ukrainian government. Trump allegedly made the aid contingent on Kiev’s announcement of an investigation into former US Vice President Joe Biden and his son, Hunter Biden.