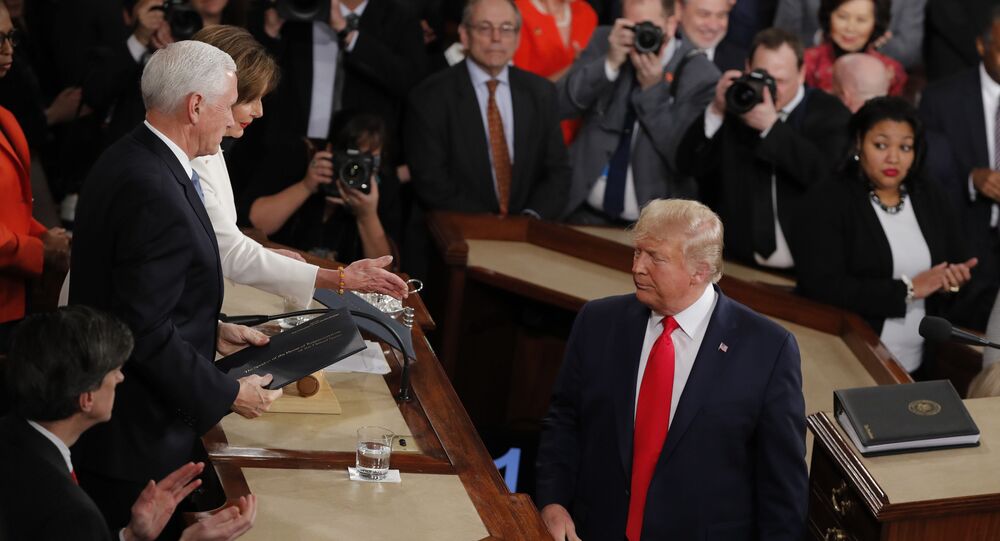 President Trump brushed off - or didn't see - a handshake offer by House Speaker Nancy Pelosi at the start of his State of the Union address on Tuesday, a video shows.

In the video, the moment of the would-be handshake can be clearly seen. The US president walked into the House chamber to the applause of congressional Republicans. He then handed copies of his speech to Pelosi and Vice President Mike Pence, who was seated next to the speaker and behind the president.

As Trump was giving Pelosi a copy of the speech, she extended her hand in a gesture that suggested an offer of a handshake. Trump, however, turned his back and faced the auditorium instead, leading Pelosi to shrug her shoulders.

This is not the first time tensions between the Speaker of the House of Representatives and POTUS have become visible during the State of the Union address. Last year, as the address was given right after the end of a 35-day government shutdown over the disagreement with Democrats on border security funding, Pelosi clapped in a rather sarcastic manner when the US president was speaking about rejecting the politics of “revenge, resistance and retribution” in a video that soon went viral.

The current State of the Union is also close to a significant date for Trump, as he is expected to be acquitted in the final vote of the Senate impeachment trial on Wednesday, months after the long process started back in September when House Democrats led by Pelosi accused Trump of using his office to force a foreign country to investigate his political rivals and then obstructed Congress by refusing to turn over documents or let staffers testify.