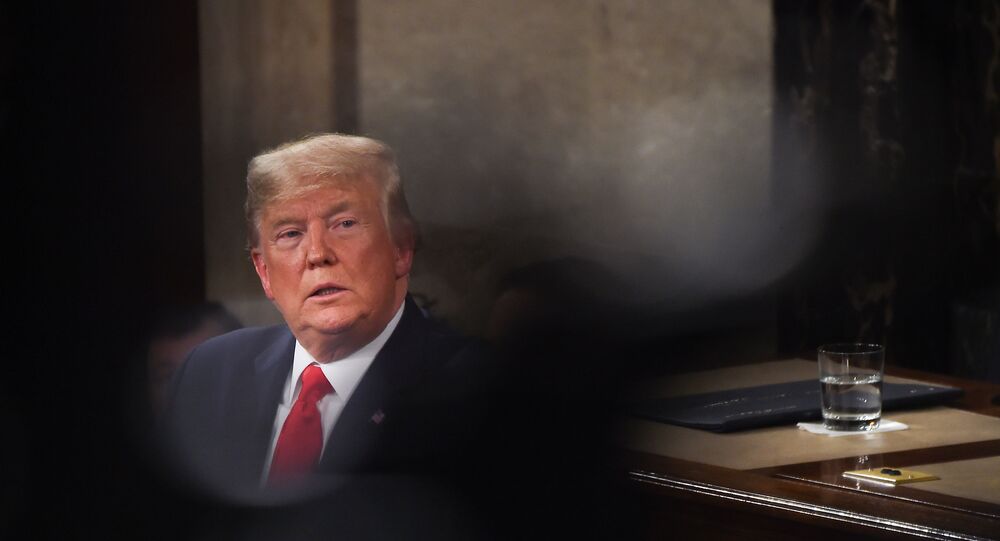 Trump Praises US-China Relations, Blasts Maduro, Vows to End US War in Afghanistan in His SOTU

On 3 February, President Trump delivered an annual speech to the American public on Capitol Hill, which was his last State of the Union address of the first term of his presidency.

In his State of the Union address on Tuesday, President Donald Trump said that throughout his presidency he managed to keep the promises he gave to the American public, among which he listed the North American USMCA trade agreement, the Phase One Trade Deal with China, efforts to stop illegal immigration and his vow to put an end to the "endless wars" in the Middle East.

Speaking on his immigration policy, Trump said the US administration was working on legislation to replace the current outdated immigration system with one based on merit, "welcoming those who follow the rules", contribute to the US economy, are financially independent and stick to the American values.

"If you come illegally you will be promptly removed from our country", the president said.

The Trump administration has taken a number of steps to curb illegal immigration. About 56,000 asylum-seekers along the US southern border have been subjected to the administration's Migrant Protection Protocols (MPP), which requires them to remain in Mexico as they await their immigration proceedings. Very few migrants have been given asylum.

The US president also vowed to eliminate the AIDs epidemic in the United States by the end of the decade, adding that the administration has started new initiatives to significantly improve care for Americans with kidney disease, Alzheimer's, as well as for those struggling with mental health issues.

Addressing the Congress, Trump urged it to fully fund the Artemis program to return Americans to the moon and lay the ground for the United States to be the first nation to Mars. NASA's newly named Artemis program hopes to send US astronauts to the moon by 2024 where they will establish a sustainable presence before going to Mars.

In support of the Second Amendment to the US Constitution, the US president pledged to always protect the Americans' right to keep and bear arms.

President Trump praised the current relationship between the United States and China, saying that is was probably the best in its history and listing the One Phase trade deal signed with China as one of the biggest accomplishments.

President Trump claimed the US was struggling to restore democracy in Venezuela, Nicaragua, and Cuba. He blasted former president Nicolas Maduro, calling him a "socialist tyrant", and promised that the "tyranny" in Venezuela would be "smashed" and "broken". The president then turned to greet Venezuela's opposition leader Juan Guaido, who was invited to the address, calling him "the legitimate president of Venezuela".

Following the mass protests back in the winter of 2019, Guiado illegally proclaimed himself interim president of Venezuela and was swiftly endorsed by the United States and its allies in Latin America. Maduro called Guido "the US puppet" and characterised the situation in his country as a coup.

Concerning its tense relationship with Iran, Trump said the United States could help improve Iran's economy in a short period of time, but Tehran was "too proud to ask for help". The president reiterated his call on Tehran to abandon its pursuit of nuclear weapons.

"We can help them make a very good and short time recovery. It can all go very quickly, but perhaps they are too proud or too foolish to ask for that help", said Trump.

After withdrawing from the 2015 Iran nuclear deal in May 2018, the United States introduced a series of tough sanctions against Tehran targeting individuals, companies, the government, and the banking and energy sectors.

The US President also touched upon the American military involvement in the Middle East, saying that the US was working to finally end its war in Afghanistan and bring American troops home. Trump earlier pledged to put an end to the "endless wars" in the highly-conflicted region.

Trump said the United States cannot serve as a law enforcement agency for other countries.