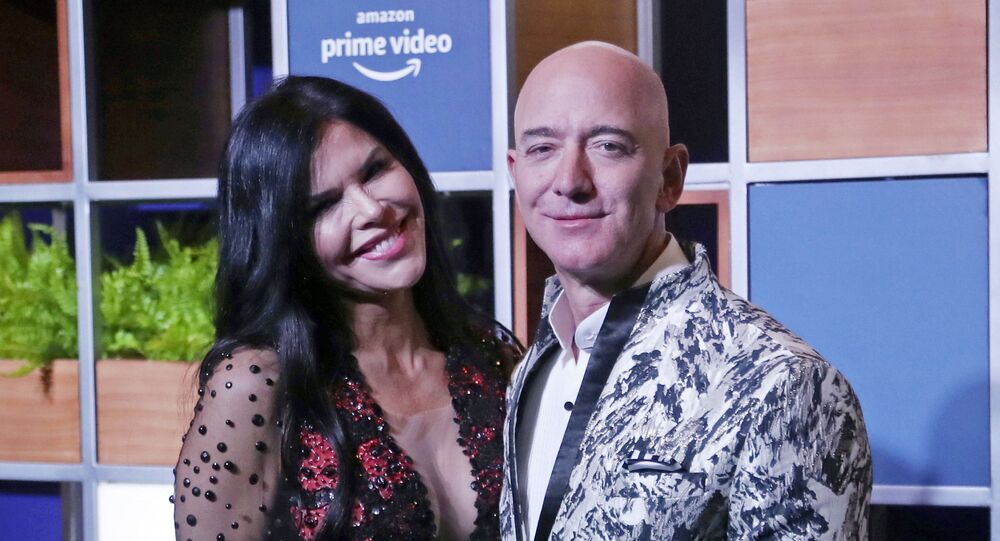 Earlier, Michael Sanchez, the brother of Jeff Bezos’ 50-year-old girlfriend Lauren Sanchez, sued the Amazon founder for defamation, alleging that the billionaire falsely claimed that intimate photos of him and his girlfriend had been leaked to the media by her family.

The world’s richest man and Amazon CEO Jeff Bezos asked a Californian judge on Monday to turn down a defamation suit filed against him by his girlfriend Lauren Sanchez’s older brother Michael last week, Bloomberg reported.

The suit by Michael Sanchez, filed on Friday, claims that Bezos and his security expert Gavin de Becker falsely accused him of leaking the businessman’s intimate photos to the National Enquirer in January 2019. The Enquirer revealed in March that the source of materials on Bezos’ private life was Lauren Sanchez’s brother Michael, but he denied giving the newspaper “the many penis selfies”, accusing Bezos of defamation.

© AP Photo / Ted S. Warren
FILE - In a June 18, 2014 file photo, Amazon CEO Jeff Bezos demonstrates the new Amazon Fire Phone during a launch event, in Seattle. Blue Origin, LLC in Van Horn, Texas, the brainchild of Amazon founder Bezos, is one of two parts of the 21st-century space race being directed in the Texas by Internet billionaires

The billionaire’s lawyer vowed to address the Sanchez lawsuit and his client did so on Monday, calling his allegations “baseless” and amounting to “an attempt to chill Bezos’ ability to exercise his right of free speech”, while failing to provide any evidence of defamation. According to the Amazon founder, Californian law permits a swift dismissal of suits that infringe these rights and lack a strong legal basis.

© CC0
FBI Probing Israeli Firm That Could Have Supplied Tools to Spy on Amazon’s Jeff Bezos – Report
The leakage of private photos and messages exposed Bezos’ affair with Lauren. At the time Bezos was still married to MacKenzie Bezos, his wife of 25 years, whom he divorced shortly afterwards. The scandal also landed the billionaire in controversy over claims of his alleged blackmail by the Enquirer after it obtained his photos, as well as speculation that Saudi Arabia’s crown prince Mohammed Bin Salman could have been involved in the hacking of his phone.
...
Reddit
Google+
Blogger
Pinterest
StumbleUpon
Telegram
WhatsApp
01
Tags:
Saudi Arabia, United States, Lauren Sanchez, Amazon, Jeffrey Bezos
Community standardsDiscussion
Comment via SputnikComment via Facebook