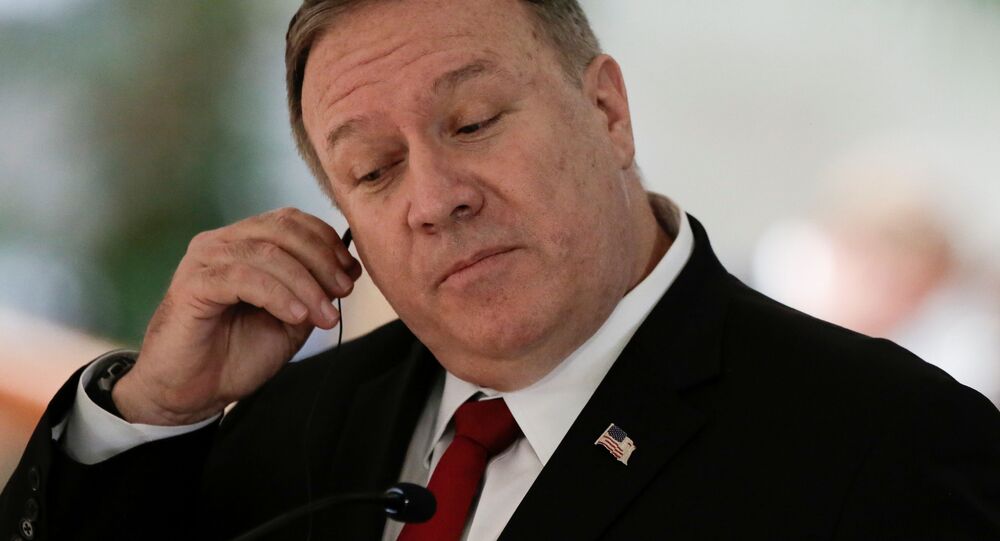 The top US diplomat has posted his weekend schedule on Twitter, and upon hearing the capital of Belarus, his subscribers couldn’t help but bring up neighbouring Ukraine, currently at the heart of the Trump impeachment trial.

US Secretary of State Mike Pompeo has taken to Twitter to announce his Saturday trip to Belarus, the first one by a top US diplomat in the past 25 years, and netizens appeared to be no less keen to speculate on his knowledge of geography than the historic visit itself.

Today I will visit Belarus – the first visit by a U.S. Secretary of State in 25 years. I look forward to meeting with President Lukashenka and Foreign Minister Makei in #Minsk as we look to expand our relationship.

“To give them the US dictatorship manual on how to run their country 'Trump style'", one remarked, tongue-in-cheek, while others queried if the official could spot Belarus on the map, apparently alluding to Pompeo being grilled the other day over Ukraine by journalist and NPR host Mary Louise Kelly and him reportedly throwing tantrums at her:

Can you find it on a map?

Are you sure your not thinking of “Bangladesh”? You seemed confused the other day when trying to find Ukraine on a map...

There was also room for conspiracy theories, and some quite eagerly engaged in them, half-serious, half-ironically:

Will you ask them to help in the next election?

This makes me nervous why is he suddenly running around Ukraine and Belarus? That Zelensky meeting was more then suspicious and now Belarus? Why now? For what purpose ? It’s good to note that it’s another country Putin probably has his eyes on...

After Maidan coup now looking for the Minsk coup

Another dictator to befriend. Good job. Please discuss how fair elections work with him. I'm sure he won't need any pointers from your crew.

“Another ex-Soviet country for you to extort", a different user dropped in passing, with someone else asking: “So what kinda extortion scheme you plan on running for Trump while out there?” Another, meanwhile, took note of the apparent mistake in the English spelling of the Belarusian president's last name:

Pompeo called for "real progress" in bilateral relations with Belarus following a meeting in Minsk with Belarusian President Aleksandr Lukashenko, expressing certainty that "together" they can "make it happen across every dimension of our relationship". Lukashenko replied for his part, noting it was "very good" that Pompeo "risked coming to Minsk after various misunderstandings between Belarus and the US", emphasising his hope for a "new chapter" in bilateral relations with Washington.

Earlier, having first travelled to the UK, to meet PM Boris Johnson and his counterpart Dominic Raab as the UK was still on the threshold of the historic Brexit deadline, Secretary of State Michael Pompeo then visited Ukraine on Friday to persuade the country that US support remains full-fledged in the wake of the impeachment debacle, according to the State Department.

The next stops on Pompeo's trip, which will last until 4 February, will be other ex-Soviet countries - Kazakhstan and Uzbekistan.

Meanwhile, back home, on Friday, the US Senate voted 51-49 to not allow additional witnesses or documents in the impeachment trial of US President Donald Trump, with the vote paving the way for a final one on whether or not to acquit the US president. The impeachment proceedings are based on two articles put forward by House Dems who voted to impeach POTUS in late December 2019 - abuse of power and obstruction of justice. The Democrats base their accusations on the supposition that Trump allegedly had a quid-pro-quo with Ukrainian President Volodymyr Zelensky and attempted to forcefully trade aid for a probe into the Bidens - something both Trump and Zelensky have vehemently denied.