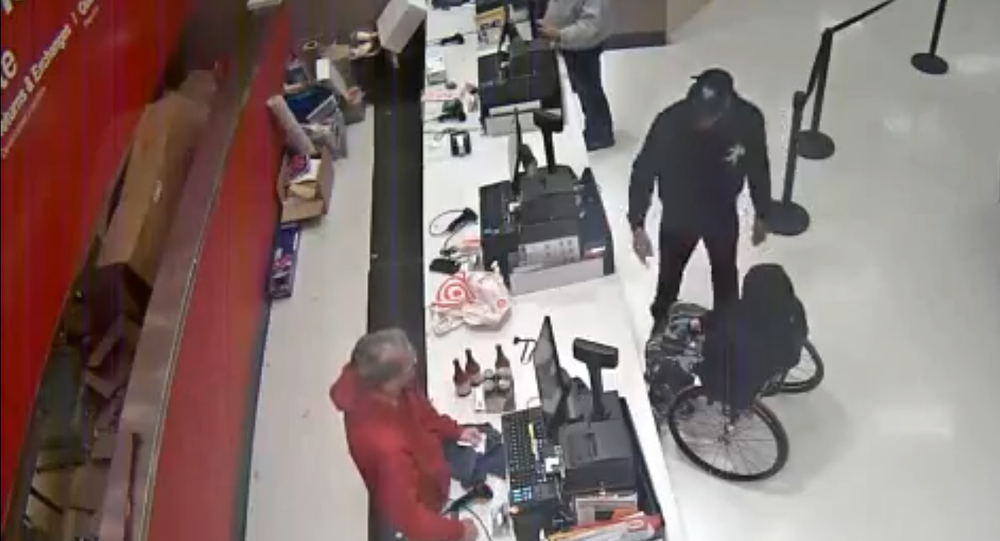 A California resident has been arrested and charged with assault and attempted kidnapping after he was caught on camera throwing a man out of his wheelchair during a dispute over a parking space.

Jimmie Tiger, of San Ramon, California, was taken into custody by the San Ramon Police Department on January 19 and was later slapped with two felony charges in relation to an incident that occurred at an area Target.

The scene in question took place on January 11 and was caught on the store’s surveillance camera.

Tiger, 32, is first seen approaching the victim, 52-year-old Philip Kinstler, who is being helped at the customer service desk. The two exchange words for nearly 30 seconds before Tiger proceeds to take hold of Kinstler’s wheelchair and begins rolling him away from the counter. Fellow shoppers are seen observing the incident, and one man appears to be approaching Tiger as the 32-year-old flips Kinstler out of his chair.

The Pleasant Hill Police Department conducted an investigation after Target filed a report on the same day. According to a press release from the department, Tiger’s wife “unlawfully parked in a parking stall reserved for people with mobility impairments” and proceeded to get into a brief argument with Kinstler over the spot. Moments later, Tiger approached the 52-year-old inside the store and demanded that he apologize to his wife for the argument.

Kinstler recounted the incident to the Washington Post and claimed that he simply pointed to the hanicapped sign and asked them “kindly if they could not park there again.”

“This is like the worst thing he could have possibly done to me," the victim asserted of the assault. He went on to explain that he has used a wheelchair for over 30 years, as he was born with syringomyelia, a degenerative disease that produces fluid-filled cysts within one’s spinal cord, and is now paralyzed from the mid-chest down.

“The wheelchair is an extension of my body. It’d be like if you bear-hugged someone and then tried to carry them out of the store,” he told the outlet. “The only way to stop him was to hold onto the wheels. I gripped for dear life.”

Kinstler said his resistance angered Tiger, and that was when he was thrown out of his chair and “fell like a rag doll” on his wrist, breaking it. He now fears that wrist may be permanently damaged from the assault.

Tiger appeared in court on January 21 and pleaded not guilty to felony charges of assault and attempted kidnapping. He has since been released from police custody on $180,000 bail.

Video: US Cop Imprisoned for 4.5 Years for Urinating on Child, Distributing Video