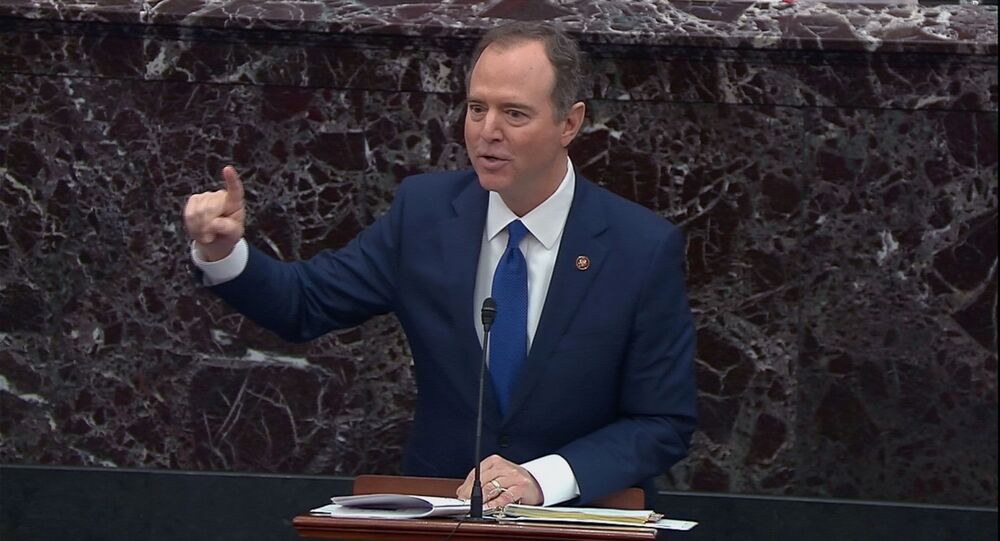 Adam Schiff, one of the key figures in the Democrats’ efforts to unseat Donald Trump, has fantasised on the Senate floor about possible secret talks between Trump and Vladimir Putin.

Former US House Speaker Newt Gingrich has ripped into Rep. Adam Schiff for pushing the Russia conspiracy again as he made the case for impeaching President Trump.

Speaking on Fox News’ The Ingraham Angle, Gingrich branded Schiff a “deranged human being” and a “pathological liar”.

“It all disintegrated. He looked like a fool. He learned nothing. He came back and lied again and again. Here we are at the end of the cycle, he goes back and decides to lie again. I think somehow people have to decide that Adam Schiff is a compulsive, uncontrollable liar.”

His rebuke was in response to Schiff hypothesising about an alleged meeting between Trump and Putin.

“If the president went further and said to Putin in that secret meeting," he told senators on Thursday. “I want you to hack Burisma, I couldn’t get the Ukrainians to do it. And I'll tell you what, you have Burisma, and you get me some good stuff, then I'm going to stop sending money to Ukraine.”

Adam Schiff just invented another Trump monologue. It's so childish and also makes one wonder why it's necessary.

Burisma and the Ukraine Scandal

The Democratic majority in the House of Representatives impeached Trump in December on charges of abuse of power and obstruction of Congress relating to his dealings with Ukraine. A trial is underway at the Republican-controlled Senate, where a vote on whether to call additional witnesses is due later in the day.

The Democrats suspect Trump of withholding military aid to Ukraine as leverage to pressure Ukraine's President Volodymyr Zelensky into investigating Joe Biden and his son Hunter, who had worked as a paid board member with Ukraine's largest private gas company, Burisma Holdings.

Its founder, Ukraine’s former minister of natural resources, had been investigated for corruption, although the junior Biden appears to have been unrelated to any of the probes into the company.

Joe Biden, US Vice President at the time, pressured Kiev to oust then-prosecutor general in April 2016 for his perceived lack of action on corruption in the cash-strapped, war-ravaged country. Donald Trump alleged that Biden did so to prevent Burisma and his son from being investigated; both Bidens and Ukrainian officials contradicted that assertion.

Trump insists he did nothing wrong in asking Zelensky to “look into” the Bidens and dismissed the impeachment efforts as “another witch hunt” designed to reverse the outcome of the 2016 election. Unconfirmed reports have surfaced, meanwhile, that Russian hackers had infiltrated Burisma’s website. Conspiracy theorists have attempted to tie the affair with the DNC hack in 2016.

Schiff and the Impeachment Process

Adam Schiff, the chairman of the House Intelligence Committee, has led the Democrats’ efforts to have Trump removed and has earned his wrath as a result.

The US President has repeatedly berated and mocked the California representative, with his anger culminating in a tweet over the weekend that Schiff “has not paid the price yet for what he has done to our country”. Several Democratic figures responded by saying that Trump had gone too far in his verbal attacks.

In September, Schiff falsely retold Trump’s call with Zelensky. He said at the time: “In essence, what the President Trump communicates is this: ‘We’ve been very good to your country. Very good. No other country has done as much as we have. But you know what, I don’t see much reciprocity here. You know what I mean? I hear what you want. I have a favor I want from you though. And I’m going to say this only seven times, so you better listen good. I want you to make up dirt on my political opponent, understand?’”