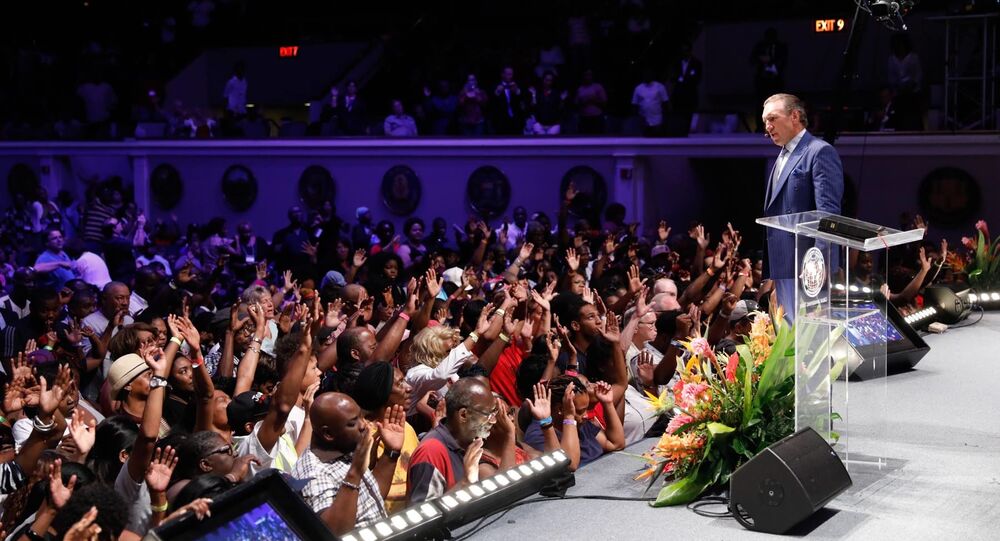 John Bolton, a former national security adviser to Donald Trump, is due to release a memoir on his stint at the White House, which will backs the central allegation in the ongoing impeachment process that the President abused his power for political gain in the Ukraine affair.

Evangelical pastor Rodney Howard-Browne has lashed out at John Bolton for disobeying President Trump and lamented not attacking him physically when he had the chance.

“You are a slime ball of the highest order,” Howard-Browne said of Bolton in a series of rambling tweets. “I should have knocked your sorry butt through the door of the Oval Office into the rose garden when I saw you.”

“WWJD (what would Jesus do): he would have made a whip and beat the crap out of him!!!!” Howard-Browne wrote in a particularly angry tweet, according to The Hill. The tweet has since been deleted.

He went on to refer to Bolton as a “globalist sellout” before tweeting that he “needs to just return to the deep state ocean he swam out of”.

You are a slime ball of the highest order .... I should have knocked your sorry butt through the door of the Oval Office into the rose garden when I saw you. I would have gladly been arrested .... what a Benedict Arnold ..... I am glad you were fired !!!!! https://t.co/vZWif9ohjV

Who is Rodney Howard-Browne?

Howard-Browne, 58, was originally from South Africa but moved to the US in the 1980s after what he said was a “calling from God”.

He is a pastor at The River, an Evangelical church at Tampa Bay, and is known for holding ecstatic revival meetings where worshippers’ behaviour ranges “from uncontrollable laughter to the noises of animals”, according to Christianity Today.

In 2012, he supported Republican candidate New Gingrich, who was nevertheless unable to secure a presidential nomination. At one rally in Florida at the time, he encouraged Gingrich’s supporters not to “allow the killing of unborn babies and allow Islam to take over this country”.

He went on to endorse Donald Trump, who relies heavily on his evangelical base, and is among the pastors who prayed for and “laid hands” on the president at the White House in July 2017.

Why is John Bolton in the spotlight again?

The Democratic-controlled House of Representatives last month impeached Trump on allegations of pressuring Ukraine into investigating the Democratic frontrunner Joe Biden and his family in exchange for planned military aid, and stonewalling the Congressional investigation into the matter. Trump denies wrongdoing, and the trial is now underway in the Senate, where a Republican majority is widely expected to ultimately exonerate him.

Bolton, who resigned last September, is reported to have written in the book that Trump had told him about his intention to withhold the aid. He also allegedly claimed that he, along with Secretary of State Mike Pompeo and Defence Secretary Mark Esper, had tried to convince Trump to release the aid, but the President rebuffed their proposals.

While Bolton has neither confirmed nor denied the report, his revelations could damage Trump’s defence. Pressure has grown on Republican senators, who hope for a quick acquittal, as Democrats now want to get Bolton to testify. The House did not subpoena Bolton this fall, after his lawyer threatened to go to court, and he did not testify. However, he said earlier this month he would give testimony if the Senate issues a subpoena.

Democrats are planning to force a vote on Friday on whether to subpoena impeachment witnesses to the Senate. They need at least four swing votes. Republicans blocked their attempts to call any new witnesses at the start of the trial last week, but Mitt Romney said over the weekend that at least four GOP senators are now likely to approve such a motion.

The White House said that Bolton’s book, which touches upon other foreign policy issues beyond Ukraine, contains “significant amounts of classified information” and should not be published until state secrets are removed from it, setting up a potential legal clash.

Trump went after Bolton in a series of tweets on Wednesday, calling his former adviser’s memoir “nasty & untrue” and saying that Bolton’s advice could have dragged the United States into "World War Six”.