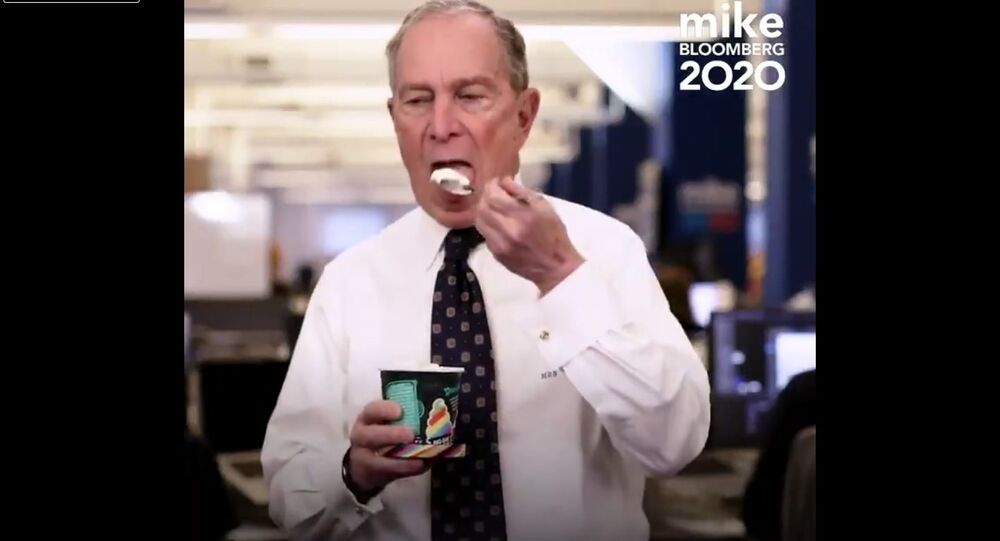 Mike Bloomberg’s apparent lack of knowledge of how humans interact with things has left some questioning whether he is an actual human being. The first 'evidence' was his awkward encounter with a dog, and now it’s an even more awkward ice cream-tasting video.

The Bloomberg campaign has been churning out content that has left people increasingly baffled.

The 10-second clip – an apparent effort of the Democratic hopeful to reach out to the LGBT community – shows him asking, ‘Where’s my ice cream?’ before being handed a pint.

He then stabs it with a spoon, as if it were soup, and tucks away with the punchline: “Big Gay Ice Cream is the best”.

Big Gay Ice Cream is a real company based in New York which operates three parlours in the city.

But rather than making him more relatable to common folks, which seems to have been the general idea, the ad has left some people cold.

“Does Michael Bloomberg know how to eat ice cream?” inquired Vice’s food writer. “After watching this bizarre campaign video, we're not so sure.”

“This is the most cringeworthy pandering so far in 2020,” said comedian Tim Young.

“Im 100% certain Bloomberg is a robot,” another person wrote. “Who scoops ice cream like that??”

Bloomberg has had two viral videos recently. The first was of him shaking a dog’s jaw. The second is this “how do you do, fellow humans” clip of him eating ice cream.

Mike Bloomberg and his staff thought that this video of him making a gross sound while eating Ice Cream and saying "mmmm Big Gay Ice Cream is the best" was a good idea to use in public. That alone should disqualify him. So cringeworthy. These are not serious people. https://t.co/CJ9mhQNstR

Me: This is the Bad Place isn’t it? pic.twitter.com/KMzvwLiUmr

Almost as cringy as the meatball that looks like Bloomberg

This was but one in a series of confusing moves from Bloomberg: earlier this week, the former New York mayor was seen greeting a dog by shaking its jaw, rather than paw, and his campaign has recently tweeted  an image of a meatball featuring his face during a Democratic debate.

However surreal those stunts are, the 77-year-old billionaire has been enjoying growing voter support, according to a new polls released Tuesday. It is estimated that 12 percent of Democratic primary voters now support Bloomberg, who has kicked Pete Buttigieg out of the top 4 but is still trailing by double-digits behind Bernie Sanders, Joe Biden and Elizabeth Warren.