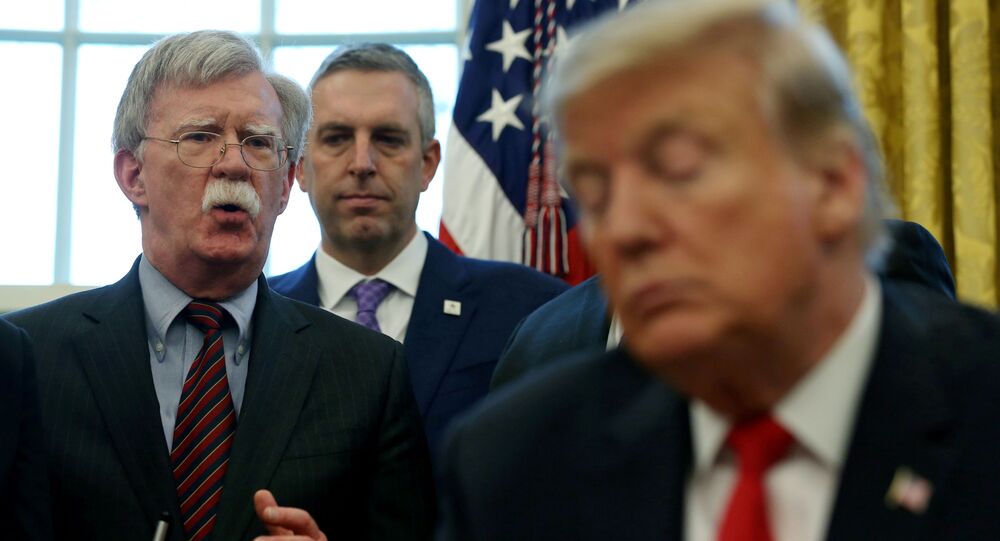 WASHINGTON (Sputnik) - Former National Security Adviser John Bolton's publishing team did not coordinate with the New York Times on the release of information from his forthcoming book, Bolton and his publishers said in a joint statement on Monday.

On Sunday, The New York Times reported that Bolton said in his yet to be published book that Trump told him in August 2019 about his intention to withhold $391 million of approved military aid to Ukraine until Ukrainian officials agreed to open a corruption investigation into Democratic presidential candidate Joe Biden.

"Ambassador John Bolton, Simon and Schuster, Javelin Literary categorically state that there was absolutely no coordination with the New York Times or anyone else regarding the appearance of information about his book, THE ROOM WHERE IT HAPPENED, at online booksellers", the statement said. "Any assertion to the contrary is unfounded speculation".

Earlier on Monday, Trump accused Bolton of lying as a means to boost book sales.

Bolton also claimed in his book that he, along with Secretary of State Mike Pompeo and Defence Secretary Mark Esper, had repeatedly attempted to convince the president to release the aid to Ukraine, but Trump rebuffed their proposals, according to The New York Times.

In response to the Times report, Senate Minority Leader Chuck Schumer wrote on Twitter that given the evidence provided by the former adviser, he, acting White House Chief of Staff Mick Mulvaney and "the others with direct knowledge of President Trump’s actions" needed to testify in the Senate impeachment trial.

© REUTERS / KEVIN LAMARQUE
Trump Wants to Deliver State of the Union Address ‘With Impeachment Trial Behind Him’, Graham Says
The Dems-controlled House of Representatives impeached Trump on 18 December on charges of abuse of power and obstruction of Congress. The lawmakers claimed Trump requested that Ukraine investigate corruption involving the Bidens by leveraging congressionally approved military assistance to Kiev. The Senate is currently conducting a trial to determine whether to convict Trump under the articles of impeachment.

Trump has denied all accusations and characterized the impeachment as a hoax and a political witch hunt. According to the US president, the transcript of his July call with Ukrainian President Volodymyr Zelensky and the fact that Kiev confirmed it was not pressured to act one way or another were proof enough of his innocence.

Trump fired Bolton in September due to disagreements on US foreign policy issues related to Iran, North Korea, Venezuela and Cuba, among others.