'They Sold My Husband's Body Before He Had Even Died': Victims of US Body-Brokers Tell of Trauma

The FBI has been investigating a funeral home in the United States accused of selling hundreds of dead bodies to medical training companies without the knowledge of the families. The scandal has shed light on a huge, unregulated and global industry.

The families of around 2,000 victims are still searching for details of what became of the bodies of their loved ones after they were entrusted to the Sunset Mesa funeral home in Colorado.

Megan Hess, who ran the funeral home in Montrose - 265 miles west of Denver, and her mother, Shirley Koch, have been accused of tricking relatives into signing papers which handed over the bodies in return for free or discounted funeral expenses.

Debbie Schum, whose best friend Lora-Lee died of bladder cancer, said she was sent a pot of crematorium ashes but was later told by the FBI they did not belong to Lora-Lee.

Another woman was told her loved one’s body had been sold to a firm in Saudi Arabia. Body parts are also believed to have been exported to companies in Canada, the Netherlands and China.

A third victim, Jennifer Noe, found a photograph of the body of her father, Charlie, in an online medical catalogue produced by the American Plastination Company. 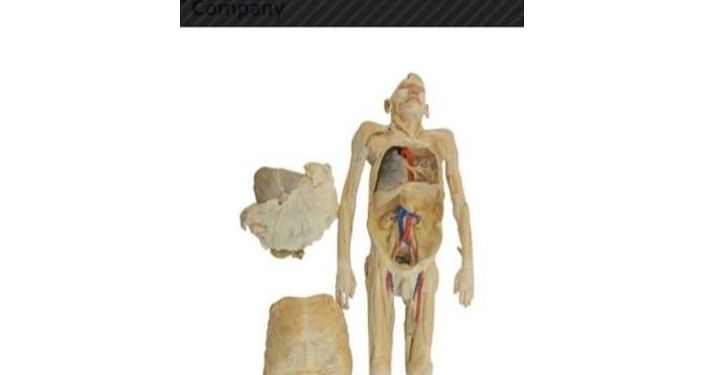 Ms Schum said: “Body brokers present to families that the bodies will be used for disease research, then change cause of death on the paperwork when selling the bodies to researchers, who don’t want diseased bodies. Mostly they want the bodies for sales props at medical seminars.”

In the case of Sunset Mesa, Ms Hess was allegedly making large profits by trading torsos, heads and other body parts to a range of specialist companies who sold them to buyers around the world for a variety of purposes, often unrelated to medical training or research.

This is Lora-Lee Johnson, who died of bladder cancer. Her body is one of hundreds which went missing after passing into the care of the Sunset Mesa funeral home in Colorado. pic.twitter.com/yebXNYt9HJ

​Ms Schum said: “As my own doctor told me ‘if you want to learn about cancer, you take a biopsy from a living person. There’s nothing to be learned from a cadaver’.”

She said it was believed many of the body parts were actually purchased by plastination companies who either sold them on to commercial body exhibit shows or sold them to military forces and arms companies around the world who used them to test the effectiveness of munitions.

Is Sunset Mesa ‘Tip Of The Iceberg’?

Ms Schum said the FBI believe Sunset Mesa is the tip of the iceberg, adding: “I do know that part of the point of the FBI and the Department of Justice with all this is not only to prosecute crimes involved in this huge case but also to expose international body-brokering and the lie called ‘medical/scientific research’.”

The FBI told the Colorado Sun in October its agents had completed their 18-month investigation and handed a file over to the office of Assistant US Attorney Jeremy Chaffin, in Grand Junction, Colorado, but it is not clear if the case has been put to a grand jury yet.

Two “body buyer” defendants and a regional hospice have been dismissed from a multi-party suit arising out of an investigation into the former Sunset Mesa Funeral Foundation and its associated entities over the alleged mishandling of human bodies. https://t.co/StU14O33zL

​The Sunset Mesa scandal has highlighted the unregulated trade in body parts.

Organs such as hearts, livers, eyes and skin donated for transplant are heavily regulated by the Uniform Anatomical Gift Act, but there are far fewer rules for bodies used for other purposes.

Ms Schum said: “Under the Act it is illegal to sell bodies. But the way they get around that is by calling it a ‘donation’ and charging for plastination or embalming.”

Plastination was invented in by controversial German anatomist Gunther von Hagens and is a way of preserving dead bodies by removing water and fat and replacing them with plastics.

Von Hagens’ Body Worlds exhibition has travelled around the world and now has permanent shows in the US, UK, France and the Czech Republic.

There is no suggestion Sunset Mesa had any dealings with Body Worlds or Mr von Hagens.

Sputnik found plastinated bodies on sale online. One company, based in China's Henan Province, said they could provide a body and ship it to anywhere in the world. They insisted their cadavers were "Chinese" and not from the US.

Lisa Wabel’s father, Donald Hanhardt, died in 2013 aged 79 and was entrusted to Sunset Mesa where his body was divided up and sold off in parts.

She said: “The only part that wouldn’t have been sold was his thighs. I believe there was not a single body that went through that funeral home that was left untouched. From the rich to the poor, the educated to the uneducated, blacks, Hispanics, whites. Race didn’t matter, gender didn’t matter. They were all considered a commodity.”

What Are Cadavers Used For?

Ms Wabel said companies like Johnson and Johnson, who design and sell medical equipment were utilising cadavers as hands-on subject matter for their training clinics around the world and automobile producers were using them as crash test dummies.

She said there was a shortage of donors for transplantable organs and tissue donations worldwide and said: “So why is that these big companies don’t realise the problem with their orders always being filled regardless how many cadavers they need? They do know, they just pawn the whole thing off on the middlemen, the body-brokers, and pretend to be oblivious. It’s infuriating, negligent and inhuman.”

Sunset Mesa has closed down and Ms Hess had her state licence as an insurance agent revoked last year.

Hess, who has already been sued in a civil court and ordered to pay US$500,000 to relatives of those who died, is also being investigated over an alleged life insurance scam.

She denies all the allegations.

But Ms Schum believes the body-brokering business is operating not just in other US states but all over the world.

She said: “How could this be going on all over the entire world and nobody knows about it? It’s horrifying.”

‘I Was Never Able To Say Goodbye’

Jenny Noe said she flew from her home in Texas to Grand Junction in December 2013 to see her dying father and “say goodbye” but when she arrived she was told he had already passed away.

“My brother informed me our father’s body had already been collected by the funeral home and were to make arrangements later that afternoon for his cremation and funeral,” she said

She never got to see her father’s body again because the funeral home told her he had been cremated and most of the ashes were interred at a Veterans’ cemetery.

But five years later she was contacted by the FBI.

“I was informed my father was never cremated, they had seized records and had a receipt for the sale of his entire body as a whole. All they could tell me was he was sold,” said Ms Noe.

Terri Reid said she and her husband Bill, a retired US Navy submariner, investigated cremation and donation for medical research before his death, from cancer, in March 2016.

She said: “We both believed strongly in education and the need for research but we lived far away from any companies that did that. We were told Sunset Mesa did some donations. I looked them up to see if they were legit and only found one complain from someone who had lost a glass eye.”

​So after her husband died Mrs Reid contacted Sunset Mesa, who sent someone to her home.

“They asked me to sign some paperwork but wouldn’t let me see it and wouldn’t give me any copies. They said I’d get them when I picked up the cremains. I was so traumatised by his passing that I agreed,” said Mrs Reid.

Two years later Sunset Mesa hit the headlines after a Reuters investigation lifted the lid on the grisly trade.

Mrs Reid brought what she thought were her husband’s ashes to a college in Grand Junction where the FBI were testing cremains.

She said: “When I arrived I saw many people in the waiting room but I was taken directly to a room with the FBI. There I sat clutching my little box of ashes, confused and scared. I was told that they were not my husband’s ashes. I was in such shock I sat there stupidly crying. I was told that by her own records Megan Hess had sold him whole and had his body shipped out at 8am the morning after she had just picked him up. So she must have had him sold before he passed.”

Dead Husband Remonstrated With Woman In Her Dreams

Mrs Reid says she was in “floods of tears” and became plagued by bad dreams.

“I had dreams of him laying on a gurney looking at me. ‘Where am I? What did you do?’ (he said). The guilt was enormous I should have known. But there was truly no way I could have known,” she said.

She said relatives of the victims were on an “unending rollercoaster of horror” as they wait for answers to what happened to their loved ones.

“I was at peace with my husband’s passing but the new horror of the body-brokers and what was done is still lingering over my head. I tell my story because I don't want to see it happen to others,” said Mrs Reid.