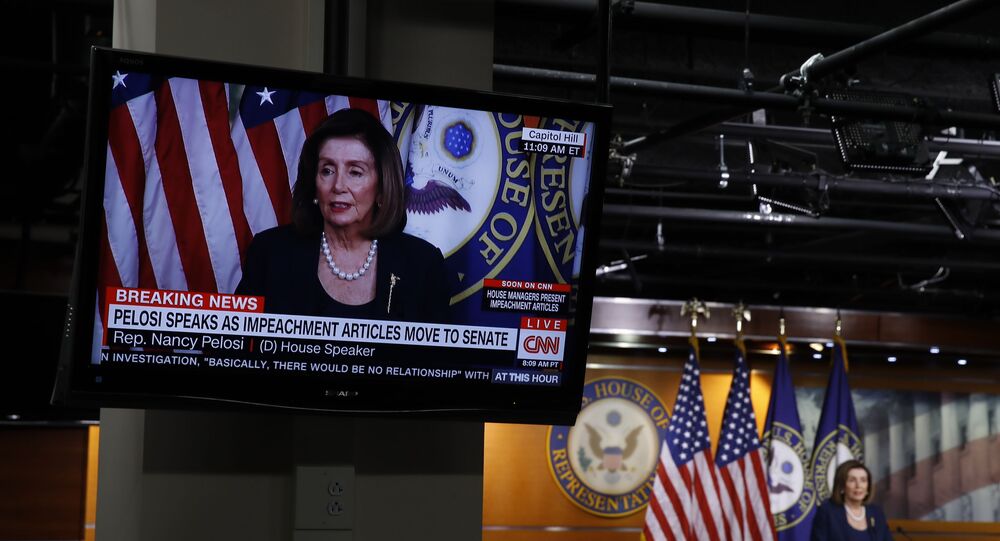 The US Senate has formally initiated the trial for the removal of US President Donald Trump from office, which kicked off with House officials reading the charges to the upper chamber and the swearing-in of Supreme Court Chief Justice John Roberts to preside over the process.

Trump's legal team on Saturday released a statement attempting to reject his impeachment by the House, characterising the charges against the US president as a "dangerous attack" on Americans and their right to vote.

"We are on strong legal footing. The president has done nothing wrong and we believe that will be borne out in this process", a source said, ahead of the document's submission to the Senate scheduled later in the day.

Trump's defence team formally responded to the six-page document containing the articles of impeachment and stated their opinion on the merits of the two charges - abuse of power and obstruction of Congress.

"The articles of impeachment submitted by House Democrats are a dangerous attack on rights of the American people to freely choose their president. This is a brazen and unlawful attempt to overturn the results of the 2016 election and interfere with the 2020 election, now just months away", the document states.

A spokesman for Trump's legal team suggested that the articles of impeachment are constitutionally invalid. "They fail to allege any crime or violation of law whatsoever, let alone high crimes and misdemeanors", the document said.

The lawyers reportedly stressed that Trump did nothing wrong and predicted that he would not be removed from office during the upcoming Senate trial, adding that the defence team planned to argue that the impeachment articles violate the US constitution.

On Saturday, US lawmakers managing the Senate removal trial filed a brief laying out their arguments supporting charges of abuse of power and obstruction of Congress against the US president.

The Democratic House of Representatives impeachment managers faced a deadline of 5 p.m. EST (22:00 GMT) on Saturday to file the document before the trial of the US president starts in the Senate next week. Lawmakers argued in the brief that Trump must be removed from the Oval Office to safeguard the integrity of the upcoming presidential election.

On 18 December, the Democratic-controlled House of Representatives voted along party lines to impeach Trump for abuse of power and obstruction of Congress for freezing military aid to Ukraine in exchange for Kiev launching a probe of political rival Joe Biden.

© REUTERS / JONATHAN ERNST
‘Impeached Forever’: Pelosi Slams Trump as Senate Trial Set to Begin Next Week
According to the US Constitution, the House has sole power to impeach, which is analogous to an indictment, while the 100-seat Senate, currently controlled by the Republicans, has the sole power of removing a president.

Trump is the third US president to be impeached. Neither of the previous two, Andrew Johnson in 1868 and Bill Clinton in 1999 were forced from office. Another US president, Richard Nixon, resigned in August 1974 before the House could vote on his impeachment, thus avoiding a removal trial in the Senate.

Trump has called his impeachment a "witch hunt" designed to overturn the results of the 2016 election.

An unnamed senior Trump administration official told reporters earlier this week that the president's legal team - made up, in part, of lawyers who formerly worked for deceased paedophile and sex abuser Jeffrey Epstein - expect a "rapid acquittal" and doubt the removal trial will last more than two weeks.

Is Impeachment Being Used for Political Advantage?