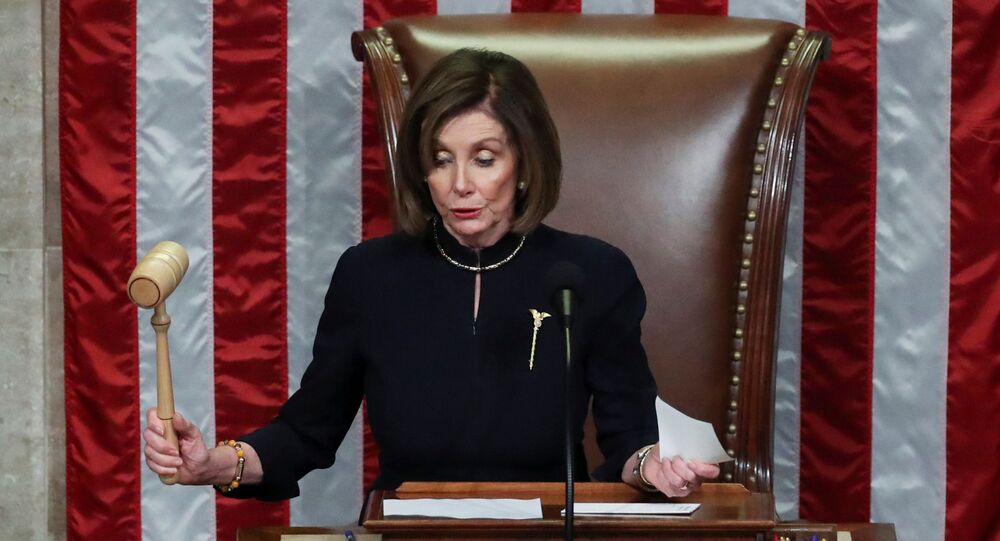 On 15 January, the US House of Representatives sent two pre-approved articles of impeachment against Donald Trump to the Senate, with a trial against the president expected to begin in the coming days. House Speaker, Nancy Pelosi, has also recently approved a team of seven Democratic prosecutors who will take part in the trial.

With Donald Trump’s impeachment trial expected to begin in the US Senate on Tuesday, House Speaker Nancy Pelosi, who remains one of his most outspoken critics, appealed to the US president directly, reminding him that he has already been impeached by the House of Representatives and this will go down in history, whatever happens next.

“If the president is listening, I would want him to know that he is impeached forever”, Pelosi said during a broadcast of HBO’s “Real Time”, when asked by host Bill Maher to directly address the president.

“And he is impeached forever because he used the office of president to try to influence a foreign country for his personal and political benefit”, Pelosi continued. “In doing so, he undermined our national security. He was disloyal to his oath of office to protect the Constitution, and he placed in jeopardy the integrity of our election, and that, I mean, really he gave us no choice”.

Pelosi also added that Trump “crossed the bridge” with his actions, particularly referring to allegations that the US president abused his power by pressuring the Ukrainian government to open an investigation into former US Vice President and 2020 presidential candidate Joe Biden and his son, Hunter Biden, regarding their activity in Ukraine. One article of impeachment relates to this and another alleges Trump’s obstruction of Congress during the hearings on the matter were approved by the Democratically-controlled House of Representatives on 18 December and then sent to the US Senate almost a month later.

© Sputnik / Alexey Malgavko
Burisma Hack Story: Attempt to Put 'Trump', 'Russia' & 'Impeachment' in the Same Headline?
The impeachment trial is now expected to begin in the US Senate on Tuesday, with Donald Trump’s defence team headed by White House Counsel Pat Cipollone, outside attorney Jay Sekulow, and also reportedly includes former Solicitor General Ken Starr and Law Professor Alan Dershowitz. It would require the support of 67 out of 100 senators for the US president to be convicted but Republicans, the president’s party, make up a majority in the Senate.
...
Reddit
Google+
Blogger
Pinterest
StumbleUpon
Telegram
WhatsApp
89
Tags:
impeachment, US, US House of Representatives, US Senate, Ukraine, Nancy Pelosi, Donald Trump
Community standardsDiscussion