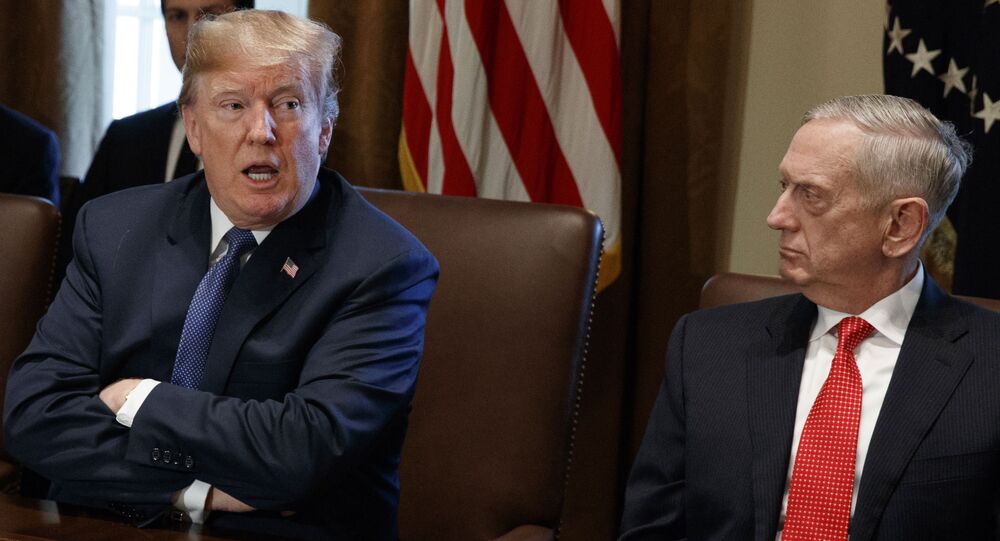 US President Donald Trump reportedly lashed out at his top military advisers in 2017 in the so-called Tank 2E924, a clandestine windowless meeting vault within the multitude of secluded corners within the US Department of Defence.

The 2E924 room is reportedly where the Joint Chiefs of Staff meet regularly to discuss and brainstorm classified matters. A new book co-authored by investigative reporter Carol Leonnig and White House bureau chief Philip Rucker "A Very Stable Genius: Donald J. Trump's Testing of America" - expected to emerge on stores shelves later this month - unveils details of a key briefing that may have shaped Trump's erratic foreign policy decisions and crystallized the US commander in chief’s berating, derisive and dismissive manner.

The book tells readers that, six months into his administration, then-Secretary of Defence Jim Mattis, Director of the National Economic Council Gary Cohn, and then-Secretary of State Rex Tillerson grew alarmed by the profound gaps in Trump’s knowledge of modern history and current international relations.

According to the book's authors, Trump cozied up to his worldview under the simple banner of “America First”. Mattis, Tillerson, and Cohn, however, were convinced that the groundless impulsive proposals of the US president would imperil national security.

On 20 July 2017, Mattis invited Trump to the 2E924, for what the former described as a 'tailored tutorial' for Trump. Apart from Mattis, Tillerson and Cohn attended the meeting, which also included then-Chairman of the Joint Chiefs Gen. Joseph Dunford, US Vice President Mike Pence and other senior military and Cabinet officials.

After slamming the Obama-era Iran nuclear deal and the mission in Afghanistan, Trump - who was reportedly annoyed at feeling as if he was being taught - constantly interrupted the briefing by verbally attacking his top advisers.

“I want to win [...] I wouldn't go to war with you people. You're a bunch of dopes and babies”, Trump said, after taking a jab at a range of issues from what the president considered to be the "stupidities" of paying for foreign military bases to his uninformed criticism of NATO, which, according to Trump, owed the United States large sums of money.

“We should make them pay for our soldiers. We should make money off of everything [...] They’re in arrears”, Trump declared, referencing the language of real estate, adding without irony that, “we are owed money you haven’t been collecting! [...] You would totally go bankrupt if you had to run your own business”.

Tillerson was among those who did not hide his indignation and responded rigidly.

© REUTERS / Jonathan Ernst
Trump Dumps Rex Tillerson Over Different Views in Foreign Policy
“No, that's just wrong, Mr. President, you’re totally wrong. None of that is true [...] The men and women who put on a uniform don’t do it to become soldiers of fortune. That’s not why they put on a uniform and go out and die […] They do it to protect our freedom", Tillerson is said to have answered.

Tillerson was reportedly angry and confused by Trump's unfocused gambits, while Mattis and Pence remained silent. According to the book, the relationship between Tillerson and Trump suffered irreparable damage at that moment.

This particular episode has been documented several times, but the book has painted a more comprehensive picture of the moment, shedding some light on Trump's current foreign policy stunts and the incentives behind his disorganized and constantly changing policy moves.