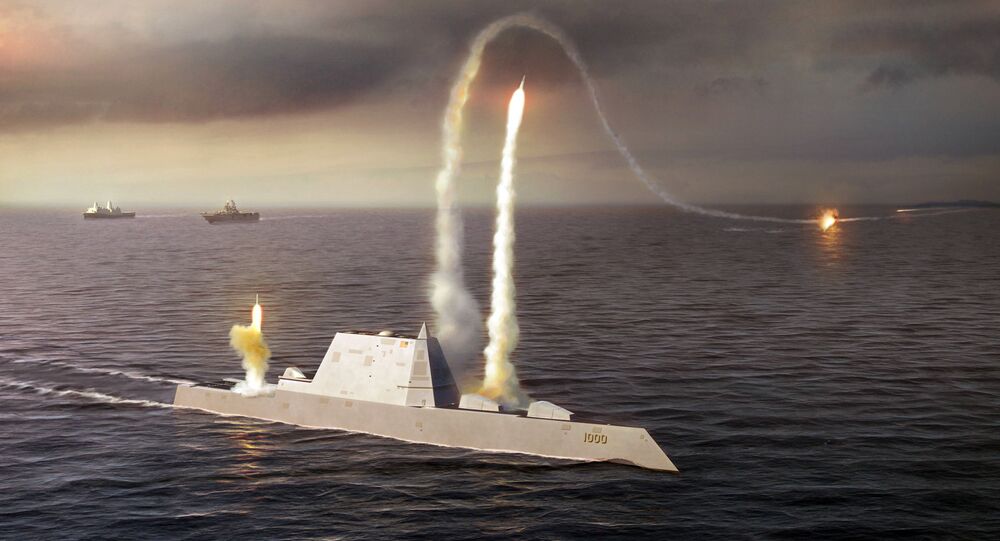 The weapon would reportedly enable the US Navy to conduct a 'rapid hit' on an enemy from a safe position, destroying targets as a “tactical surprise” at the beginning of a conflict, without the need to deploy soldiers or military assets.

The US Navy is considering arming the new USS Zumwalt-class destroyer, to be ready for combat as soon as 2021, with a new weapon expected to be able to fire missiles armed with warheads designed to conduct prompt global strikes within one hour or less, Fox News reported on Wednesday, citing Capt. Kevin Smith, a Zumwalt-class destroyer program manager.

“This would be the perfect platform for Conventional Prompt Strike,” Smith said.

The Conventional Prompt Strike (CPS) weapons program, initially emerged in US President George W. Bush’s era, and is reportedly engineered to arm ballistic missiles with conventional warheads, enabling the missile to have the same speed and range of a nuclear weapon mounted on a missile and with the ability to reach any place on Earth in a “matter of minutes”, according to Fox News.

“The inherent capability of this ship is signatures. (stealth, low radar signatures) It is designed to be stealthy and carry the fight offensively to the adversary,” Smith said.

Smith noted that arming the Zumwalt destroyer is not yet a program of record, as it is currently something being considered or possibly “looked at” in the future.

The Pentagon reportedly asked for an increase to the budget of the CPS program, which had been stopped and resumed several times in recent years, from $201 million in 2018, to $278 million in 2019, according to a 2019 Congressional Research Service (CRS) report, titled “Conventional Prompt Global Strike and Long Range Ballistic Missiles”.

The CRS report said, citing developers of the weapon, that it is not intended to function as an alternative to nuclear weapons, although it “would supplement US conventional capabilities”.