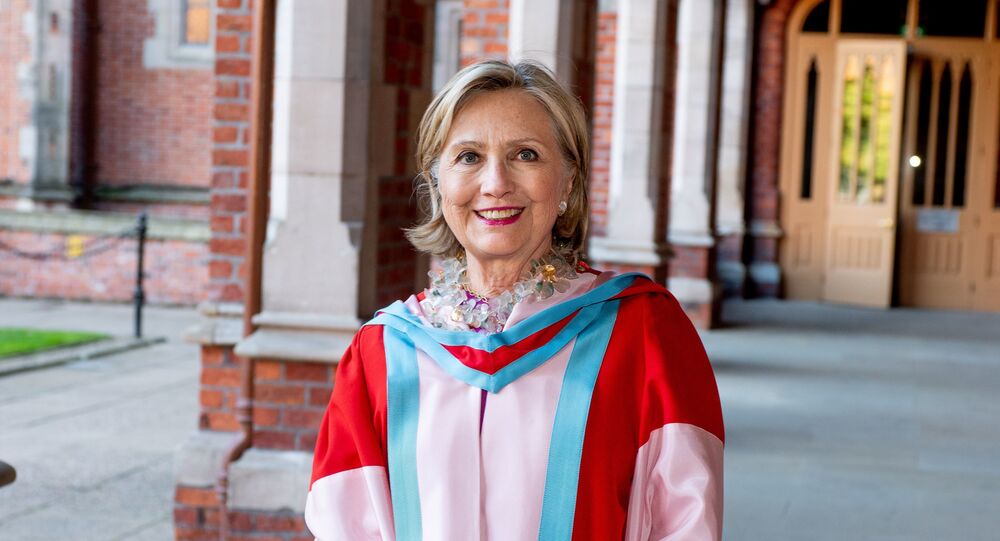 Former secretary of state Hillary Clinton never gets tired of playing the ‘Russian hackers’ card. With the 2016 election interference argument wearing out a bit over the past four years, the same people are pushing the same conspiracy theory, although this time in a different set-up.

With the impeachment process producing little news these days, Hillary Clinton has jumped on a chance to hit out at both Trump and Russia at once.

Mrs. Clinton, who has continuously blamed Russian hackers for her 2016 defeat, renewed her claims in a conspiracy-minded tweet on Tuesday.

She wrote: “Russians appear to be re-running their 2016 hacking playbook, once again to benefit Donald Trump,” before asking “Will the Russians help pick our POTUS again?”

It appears, however, that Hillary’s latest outburst didn’t go over well with a number of people.

“I'm getting déjà vu,” one commenter wrote. “Weren't you the first one to make that ridiculous claim in 2016? Not this time, Satan.”

Weren't you the first one to make that ridiculous claim in 2016?

Not this time, Satan.

Another inquired: “Just to be clear, the playbook is hackers releasing completely true information about Democrats that make them look bad, right?”

Just to be clear, the playbook is hackers releasing completely true information about Democrats that make them look bad, right?

A third person wrote: “Who’s running the same playbook? This is the problem with no consequences for the coup plotters and the corrupt media. Unless they’re called out and punished, they’ll continue to push this bullsh*t ploy”.

“Do you ever get tired of blaming Russia for your loss in 2016, Hillary?” still another user said.

Do you ever get tired of blaming Russia for your loss in 2016, Hillary?

You lost because Americans outside of California & New York didn’t want to vote for you! That’s the TRUTH. Time to accept it and move on. You are literally the sorest loser of ALL-TIME!

Mrs Clinton quote-tweeted a Tuesday piece in The New York Times, which claimed that Russian hackers attempted to infiltrate Burisma, the Ukrainian energy company at the centre of the Trump impeachment trial.

Citing allegations that Democratic presidential front-runner Joe Biden had ousted a Ukrainian prosecutor-general who'd investigated Burisma – which had employed his son Hunter – Donald Trump asked Ukraine to probe both Bidens in a July phone call with President Zelenskyy. That call prompted an inquiry from the House Democrats, who accused Trump of abusing his power to damage his potential rival in the presidential race.

The New York Times story was based on claims by Area 1, an American cyber-security firm that investigated the suspected hacks of Burisma employees late last year.

Area 1 claimed that the hacker’s modus operandi – a phishing campaign that helped them steal the employees’ credentials and infiltrate Burisma’s website – was akin to that used in the cyber-attack on the Democratic National committee in 2016; the Burisma hack, they said, was a “cookie-cutter GRU campaign”.

Notably, one of the group of cybersecurity experts who created Area 1, Blake Darche, is also the founder of Crowdstrike, the firm hired by Democrats to investigate the 2016 DNC hack.

At the time, an unidentified person or a group of people under the handle “Guccifer 2.0” hacked the DNC computer network and released its documents to the media and WikiLeaks. Arguably the key discovery from that leak was the DNC’s covert institutional bias against Hillary Clinton’s rival Bernie Sanders, who went on to lose the Democratic primary.

It took CrowdStrike about a month to decisively accuse Russia’s intelligence agencies of being behind the hack. The firm cited such impressive evidence as the accidental inclusion of Russian-language artefacts in the metadata and a Bolshevik nickname used by a person who modified one of the documents.

Although no persuasive evidence has been presented to prove Russia’s role in the hack (WikiLeaks founder Julian Assange said there was “no proof whatsoever” that Russian intelligence was behind it), the Democrats have weaponised that claim against both Russia and Donald Trump, with the “Russian interference” narrative dominating much of his presidency.