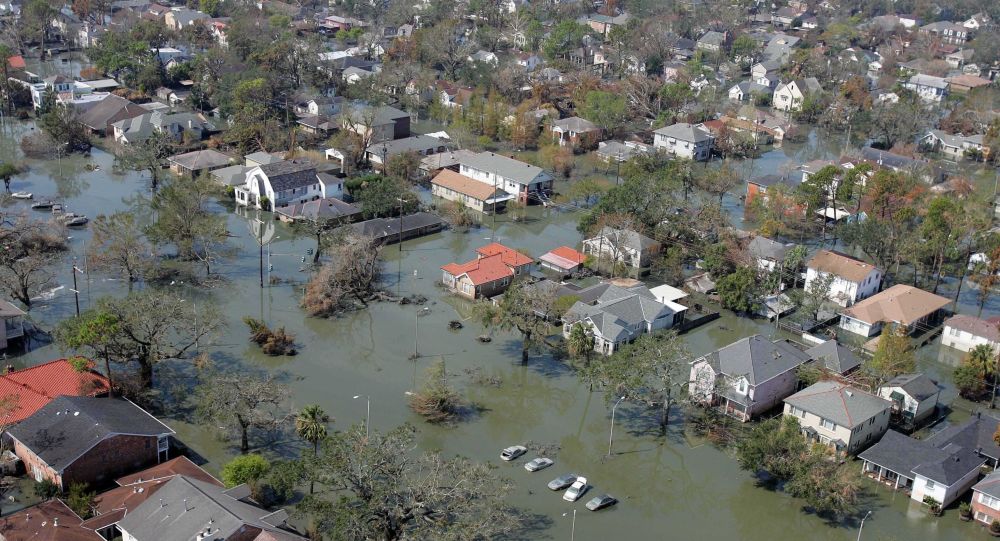 In August 2005 the city of New Orleans was devastated by floodwater after the levees protecting it breached during Hurricane Katrina. US President Donald Trump visited New Orleans this week but is it really prepared in the event of a Category Five storm?

The author of a book about Hurricane Katrina and its impact on New Orleans has said that although the levees have been rebuilt stronger than they were before the 2005 storm, they are not enough to protect it in the age of climate change.

"Katrina has been called the first $100 billion disaster and I believe losses were well in excess of that…The biggest single outlay was about $14 billion spent by the Army Corps of Engineers to rebuild the federal levees and other flood defence infrastructure," Jed Horne, author of 'Breach of Faith: Hurricane Katrina and the Near Death of a Great American City', says.

Louisiana still hasn’t finished investigating 540 oil spills after Hurricane Katrina. The state is likely leaving millions of dollars in remediation fines on the table — money that environmental groups say they need as storms get stronger. https://t.co/0oqMMKayrp

​"It's stronger than it was, but not sufficient to repel the really huge storms that can occur in the Gulf (of Mexico) and are predicted to hit with greater intensity and frequency in the age of climate change,” Mr Horne says.

Hurricane Katrina made landfall just to the east of New Orleans but the storm surge it created sent water shooting up several canals from Lake Pontchartrain into the heart of the city - which is largely below sea level - and several levees failed, allowing water to inundate residential areas like the Lower Ninth Ward.

The crowd in New Orleans for the #LSUvsCLEM game just erupted as Trump entered.

Trump is doing something right if he’s booed by DC elites at the Nats game and praised by real America. pic.twitter.com/1WiIbRzoWD

​More than 1,300 people died and two-thirds of the city’s population were evacuated to Baton Rouge, Houston or cities even further afield.

Mr Horne says the Army Corps, which was heavily criticised for flaws in the design and construction of the levees, had now rebuilt them.

"The Army Corps did what should have happened after Hurricane Betsy hit in 1965 - it put gates at the mouths of the outflow canals rather than relying on the old earthen levees that failed even before water levels reached the concrete walls with which they had been topped."

"But the whole thing is still designed only to survive a so-called ‘hundred year’ storm (a storm with only a one percent chance of happening every year). Katrina, even after it weakened, was two or three times that powerful and Category Five storms - the roughest weather - are not uncommon in the Gulf,” Mr Horne adds.

He says: “A direct hit by a storm that big and New Orleans is Atlantis…After 1953 the Dutch fortified their coast with battlements 100 times as strong as what the federal government provided New Orleans after Katrina. The Dutch have engineered their North Sea defences to resist storms anticipated once in 10,000 years. New Orleans’ vulnerability is much greater than in 2005, due to rising seas that have eaten away at coastal wetlands. The wetlands and old cypress forests along the coast acted as a buffer that slowed down and lowered storm surge. Now, not so much and, soon, not at all. Some 1,500 square miles of the Louisiana coast have washed away in the past century.”

The Mississippi River Gulf Outlet - a man-made shipping channel which unwittingly aided the storm surge in 2005 - was eventually decommissioned and plugged by a massive concrete wall.

This year is an election year in the United States but flood protection is not high on the agenda for President Trump.

On Monday, 13 January, Trump attended a college football match at the Superdome in New Orleans, which famously housed thousands of evacuees from the flooding in horrendously insanitary conditions in 2005.

During his visit this week Trump is not thought to have met with the current Mayor, LaToya Cantrell, or discussed flood protection with the Governor, John Bel Edwards.

Mr Horne says the population of New Orleans before Katrina was around 450,000 and it is now around 390,000 but he said the demographic make-up of the city had changed considerably.

In 2005 the city was 66 percent African-American with high levels of poverty in places like the Lower Ninth Ward. Mr Horne says the black population was now around 59 percent, with many people choosing to stay on in Baton Rouge and Houston.

The Latino population has doubled to around 15 percent, largely due to a flood of Mexican migrants who worked in the reconstruction of the city, and there has also been an influx of middle class whites, who saw the low cost of accommodation and business premises as an opportunity.

​Mr Horne says: “The recovery has been uneven across the region. St Bernard Parish (which includes some of New Orleans’ eastern suburbs) has about half its pre-Katrina population. Ditto for the Lower Ninth Ward. Areas on higher ground, mostly along the Mississippi River, have more residents than before the storm. Resultant gentrification has displaced the old ethnic, working-class populations who stayed on in the city after the schools were integrated and the white middle class fled to suburbia.”

He said: “It must be acknowledged that the unexpected influx of white, college-education young people has played a significant role in revitalising the city’s economy. The local version of Silicon Valley is called Silicon Bayou.”

In the wake of Katrina many urban planners recommended changing the city’s “footprint” - abandoning easily flooded districts - and introducing a light rail network on raised tracks to improve links with Baton Rouge, Texas and Mississippi.

Mr Horne says: “For the most part, the chatter about re-engineering the city’s ‘footprint’ came to very little.”

In a column for The Lens in 2017, Mr Horne wrote: “We need to get just as smart and wily about water as Rotterdam. New Orleans’ continued viability as a population centre and commercial hub depends on it. We must learn to live with water, to absorb rainfall and storm surge in massive retention facilities, green spaces that double as parks.”

© AP Photo /
The damage from hurricane Katrina near New Orleans is seen from Air Force One. In 2005 hurricane Katrina, the largest and third strongest hurricane ever recorded to make landfall in the US, left 1,300 people dead.

Hurricane Katrina met with a slow and bumbling reaction from the Federal Emergency Management Agency (FEMA), President George W Bush and to a lesser extent the Governor of Louisiana, Kathleen Blanco, and the Mayor of New Orleans, Ray Nagin.

Nagin managed to get re-elected in 2006 but eight years later he was convicted of corruption and is serving his sentence at a federal prison in Texas.

Mr Horne says: "Nagin was only the most outrageous of the city’s political embarrassments. He was caught essentially taking bribes from Home Depot as the chain store, a supplier of construction supplies and home and garden appliances, sought permission to set up shop at a coveted location.”

"New Orleans has always had a high level of corruption, but Katrina seemed to exhaust the citizenry’s tolerance for that kind of ‘business as usual’,” he added.

Mr Horne says Nagin’s successor, Mitch Landrieu, turned out to be an honest mayor, was credited with helping the city’s economic recovery and was even talked of at one stage as a possible Democratic nominee for the White House.