The Democratic National Committee’s first Democratic debate of the election year on 14 January launches a new phase of the 2020 Democratic presidential contest - the primary voting season, with Iowa’s caucus-goers set to make the nation's first picks in early February.

As tensions spiral in the Middle East and Donald Trump’s pending Senate impeachment trial loom, the Democratic debate of 14 January takes place just a few weeks ahead of the first nominating contest of the primary, the Iowa caucuses, slated across the state for 3 February.

Co-hosted by CNN with The Des Moines Register at Drake University in Des Moines, Iowa, the two-hour event is the first of four planned for the next two months, each taking place in a different early voting state. The eighth debate will be on 7 February in New Hampshire, the ninth will be on 19 February in Nevada, and the 10th will be on 25 February in South Carolina.

The DNC earlier raised the debate qualifications again, narrowing down the field to just six candidates as opposed to December’s seven.

The qualifying requirements were to get at least 5 pe cent in four DNC-approved polls or at least 7 percent in two early-state polls (Iowa, New Hampshire, South Carolina and/or Nevada) before 11:59 p.m. on 10 January.

Who Made the Cut:

Former Vice President Joe Biden holds a steady lead in the Democratic nomination battle, the January IBD/TIPP Poll shows. While Joe Biden’s name has been mired in the Donald Trump impeachment saga, there has been no legal evidence presented to support the claims of wrongdoing on Biden's part. However, even Pete Buttigieg has criticised Biden for the "appearance of a conflict" of interest regarding his son's position on the board of a Ukrainian energy company. 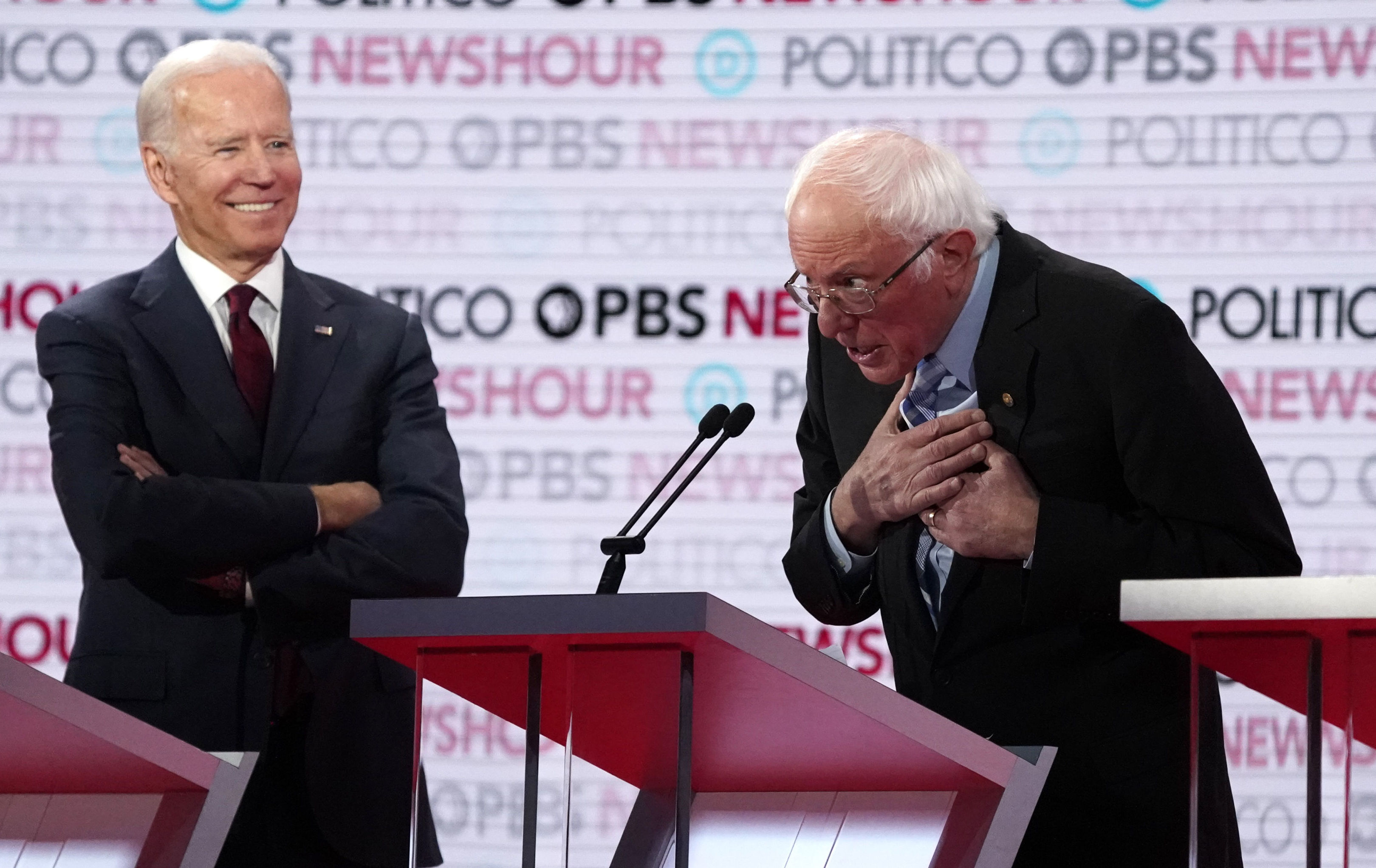 Biden has long emphasised his decades of foreign policy experience, which include his time as vice president under President Barack Obama and as chair of the US Senate Foreign Relations Committee. Analysts cited by Time believe rivals will likely criticise his 2002 vote to authorise military force against Iraq.

If he were to win the Democratic nomination, he would be the first openly gay presidential nominee for a major political party. Buttigieg was an intelligence officer in the US Navy Reserve between 2009 and 2017.

Buttigieg, who served in the US Navy Reserve and was deployed to Afghanistan in 2014, is the only candidate among the six in the debate with military experience, seen by analysts as likely to showcase how that moulded his foreign policy views.

Sen. Amy Klobuchar, 59, was the first woman to be elected senator from Minnesota in 2006. She previously served as the county attorney for Minnesota’s most populous county, Hennepin County, from 1999 to 2007. 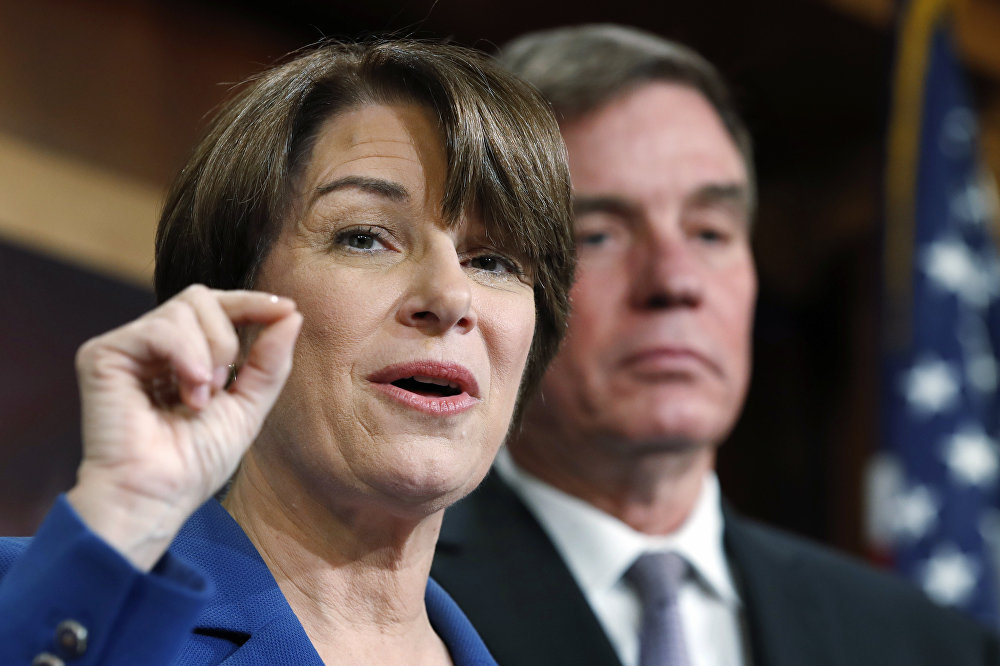 Klobuchar, who has spent a lot of time campaigning in Iowa, has been gaining steam in the state, polling at 7 per cent according to ReadClearPolitics’ polling average on 9 January compared to 2.8 per cent nationally.

Vermont Sen Bernie Sanders, 78, served as Vermont’s sole congressional representative from 1991 to 2007 and has represented Vermont in the Senate since 2007.

Sanders ran for the 2016 Democratic nomination and lost to former Secretary of State Hillary Clinton.

The oldest Democratic hopeful, Sanders has caused many Americans to wonder whether he is physically able to perform the duties of a president if elected.

The Sanders campaign recently sent out US-based media letters from three doctors assessing the candidate's health condition as "more than fit enough to pursue vigorous activities and an occupation that requires stamina and an ability to handle a great deal of stress".

Sanders was hospitalised in Las Vegas, Nevada, on 1 October after experiencing chest pains, and diagnosed as having had a small heart attack.

The US Senator, who describes himself as a democratic socialist, has focused his campaign on proposals for a government-run 'Medicare for All' healthcare plan, to be funded primarily by higher taxes on multinational corporations and the wealthy. 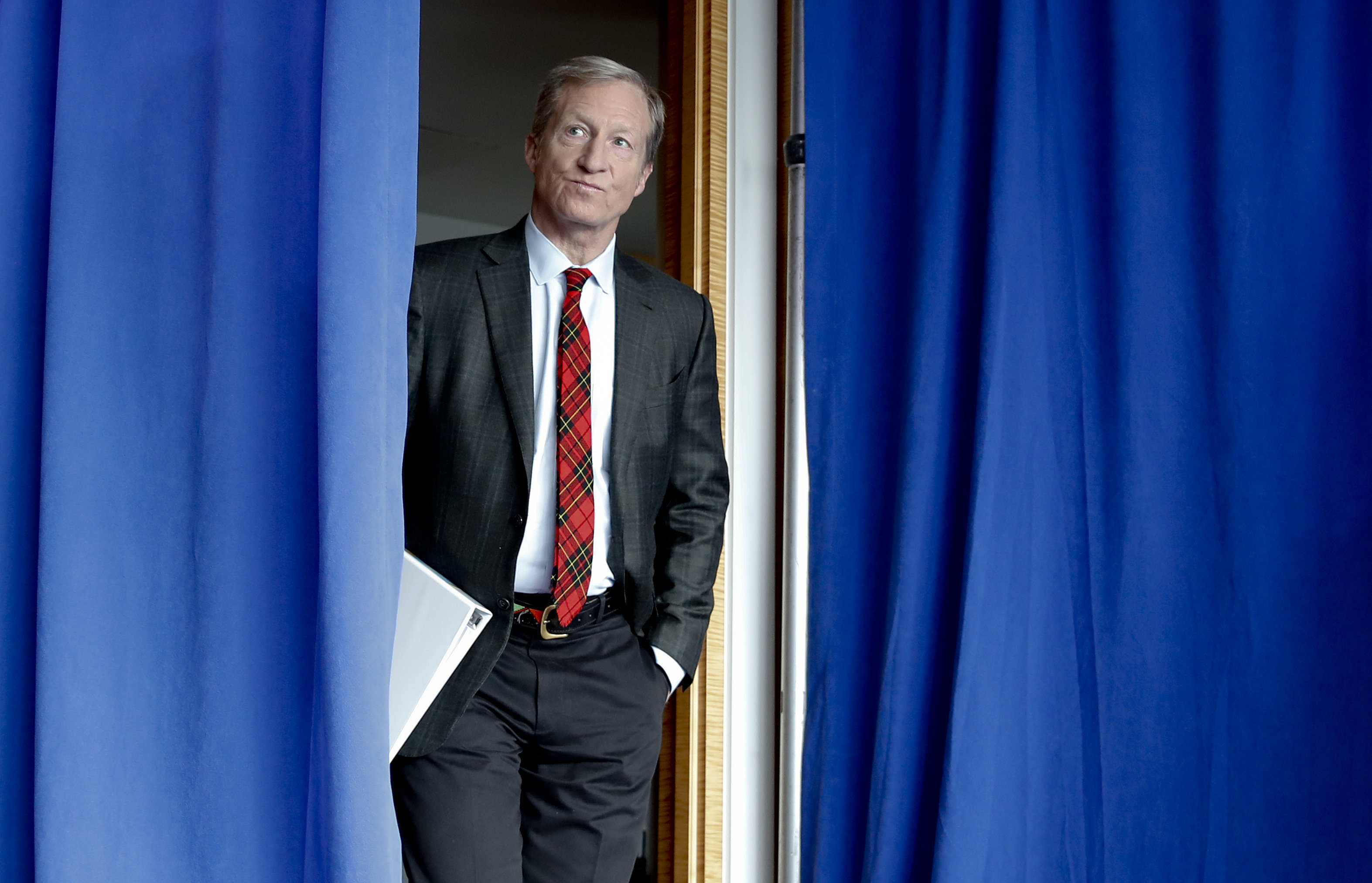 Steyer has funnelled his own money into campaigns calling for the US President’s impeachment and touted his ability as a successful businessman to take on Donald Trump.

In 2012, Elizabeth Warren, 70, became the first woman elected to the Senate from Massachusetts. She previously taught law, specialising in bankruptcy.

Warren continues to be listed in all opinion polls among the top three Democratic presidential candidates, despite failing to cut significantly into former Vice President Joe Biden's support base and loosing ground significantly to Senator Bernie Sanders' energetic campaigning, the polls say.

Warren, a fierce critic of President Trump, hails from the so-called ''progressive wing'' of the Democratic party and is mostly known for her "Medicare for All" healthcare plan. Her healthcare policies, however, have been criticised by both Democrats and Republicans.

The candidates will stand on stage based on their average performance in qualifying polls released in January, with the highest polling candidates standing in the middle. 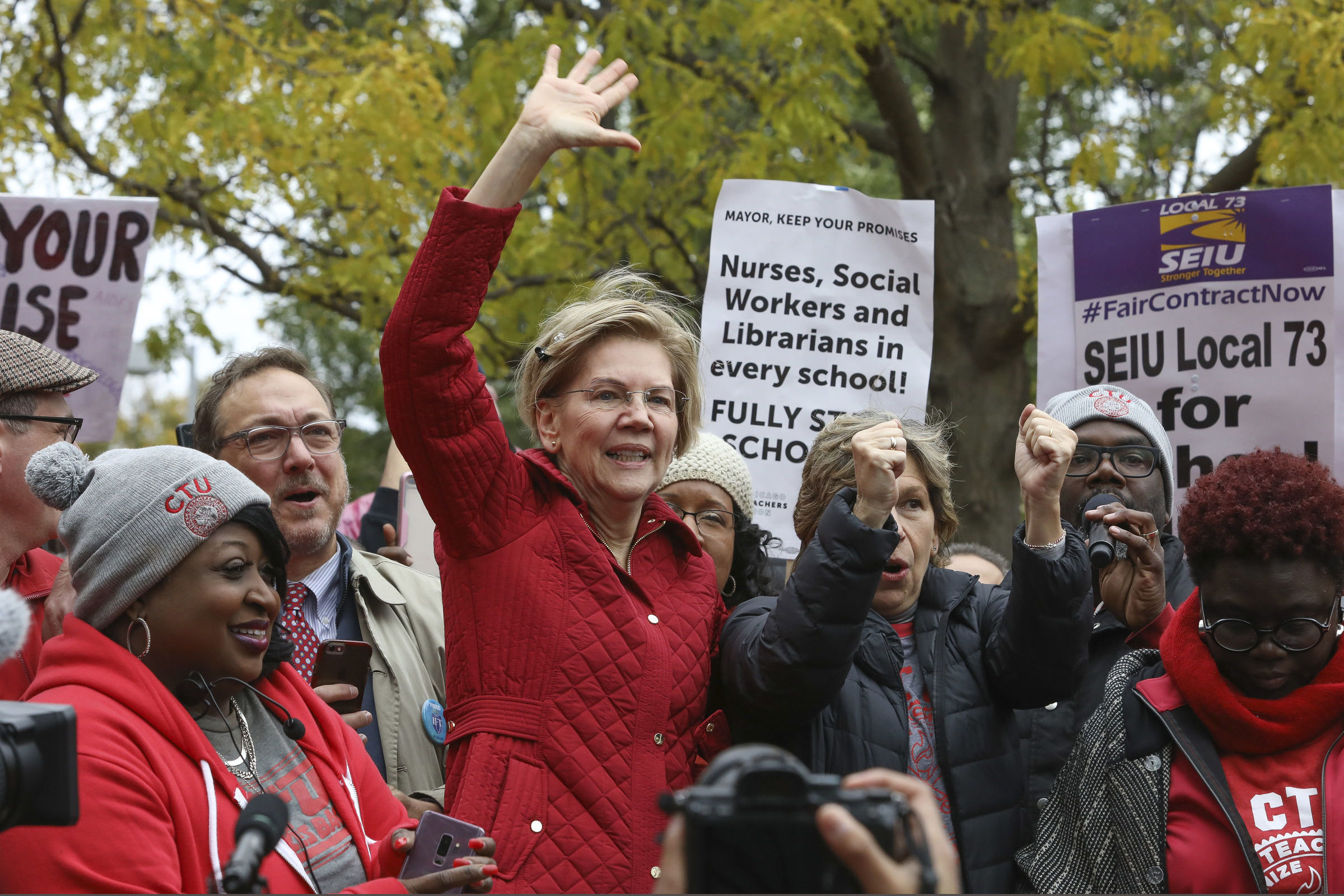 Thus, from left to right, they will stand in the following order: Steyer, Warren, Biden, Sanders, Buttigieg and Klobuchar.

Biden and Sanders will be placed centre-stage.

How Much Sway Will the Debate Have?

Tuesday’s debate is the last one before nominating contests begin on 3 February with the Iowa caucuses.

The result of this first caucus is typically perceived as an indicator of the front-runners in the race.

Since 2000, every Democratic presidential nominee has come in first in the Iowa caucuses, including former President Barack Obama in 2008.

Currently, not all Iowa caucus-goers have made up their minds, as recent polling suggests a majority of people planning to watch the caucus could switch candidates, claim analytics.

“In Iowa [there’s] a long tradition of candidates surging or declining very quickly in the final weeks before the caucus,” TIME quoted Rachel Paine Caufield, a professor of political science at Drake University as saying.

Candidates will continue campaigning throughout the state in the following weeks.

President Donald Trump’s impeachment and  tensions between the United States and Iran that spiked on 3 January when the US assassinated a top Iranian General,  are anticipated to come up at the January Democratic Debate, as well as other crucial Democratic topics like healthcare, economic inequality and education.

The Washington-ordered killing of Iranian Maj. Gen. Qasem Soleimani has dominated the headlines and Tuesday's debate is perceived by analysts as a chance for candidates to tout their foreign policy stance.

Given recent tensions with Iran, foreign policy will almost definitely be discussed.

“I can guarantee you that right now each of the candidates is really honing their message on the Middle East, [and] on Iran and Iraq in particular,” Caufield said.

The expected focus on foreign policy could further shift debate conversation away from health care, which has drawn extensive attention throughout the 2020 cycle.

Other issues, such as immigration, college student debt and agriculture are anticipated as talking points.

Ongoing historic flooding in Iowa and devastating wildfires in Australia will likely serve as a backdrop for the discussion over climate issues.

As Iowa has a large agricultural industry, the topic of trade might get more attention than in previous debates.

US Sen. Bernie Sanders narrowly leads his rivals with 20 percent of likely Democratic caucus-goers naming him as their first choice.
US Sen. Elizabeth Warren has 17 percent support.

No other candidate polled above 0%. https://t.co/zI54dRncgk

Joining them on Tuesday is Klobuchar, who was the first choice among 6 per cent in the poll, and billionaire businessman Tom Steyer, at just 2 per cent.

Sanders Campaign Avows US Senator in 'Good Health' After Heart Attack, Can Run for Presidency