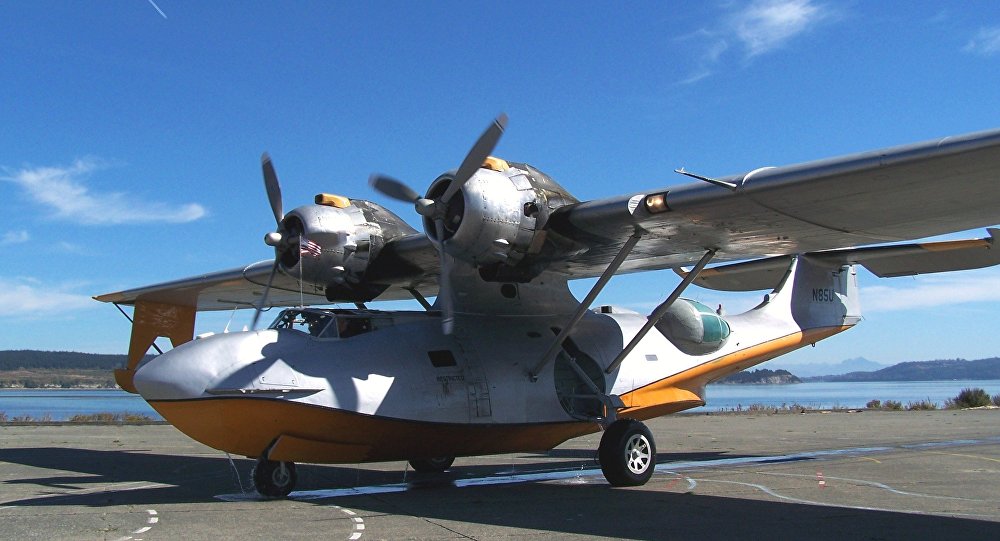 ELIZABETH CITY (Sputnik) - A petition to honour World War II Soviet and allied aviators with a monument gained around 3,000 supporters in 18,000-strong Elizabeth City, located in the southeastern US state of North Carolina.

Local authorities were invited to revisit their decision to halt the project, Rick Boyd, a local citizen and the petition initiator, said on Sunday.

In 1944-1945, Elizabeth City hosted hundreds of Soviet naval pilots who received there PBN Nomad amphibious bombers and learned to fly them before ferrying home. It was only in the 1990s-2000s that the top-secret mission codenamed Project Zebra was declassified in both countries. The city council initially endorsed the project, that would see a Russian-funded bronze memorial placed on the Pasquotank River bank but backtracked two years ago amid deteriorated relations between the two countries with Russia accused of meddling in the US election, an allegation it flatly denies.

"I was reading a paper one morning and I saw the city council change their minds about having the monument. I told my wife somebody needs to start a petition to get the monument here. My wife said, you can do the petition. What? The petition. Ok, we will," Boyd told reporters.

Boyd said he collected his initial 300 signatures the very first night, campaigning with posters in front of the city museum.

"Yes, it’s high percentage, it really is. And most people at that time have never even heard about Project Zebra. We literally were explaining to almost everybody what it was and they couldn’t understand why we wouldn’t have the monument. I still hope some day we do," he added.

On Saturday, hundreds in Elizabeth City took part in a ceremony to commemorate five pilots — four Soviet aviators and a Canadian serviceman of the British Royal Air Force — killed on 11 January 1945, when their seaplane crashed into the Pasquotank. Mayor Bettie Parker proclaimed the 75th anniversary of the tragic event The Project Zebra Day as a tribute to the fallen and in recognition of the importance of the mission which gave Elizabeth City "a major role in WWII."

Parker made no mention of the monument, but Boyd hopes that the commemoration will help to change the city council views.

Displayed on Sunday as a small-scale model at Elizabeth City museum, the monument would portray Soviet, American and British aviators standing together atop of a Nomad seaplane braving the waves.

Peel lamented his successors’ decision to halt the project, saying he saw it as a partisan bickering that echoed political developments in Washington of the time.

"We voted to do it [to erect the monument] as a city council. I didn’t run for re-election and after the new council got elected the power in the council shifted and the people that had been against it had the votes to now say we are not going to do it. Which I thought was totally wrong," Peel said.

Peel ridiculed reasoning behind votes against the monument.

© Sputnik /
PBY Catalina on display in local museum, an aircraft similar to amphibious bomber PBN Nomad given by US to the Soviet Union during WWII

Gregory Gagarin, whose father served as a key US interpreter and liaison officer with the Project Zebra, is another big supporter of the monument.

"I would love for it to come here. I think it would certainly be unique for this town. This was the only place this happened. That makes more than enough justification for having a monument like that. I think it is in good taste, I like it. I hope someday it might happen," Gagarin told reporters.

Gregory Gagarin-senior, an offspring of Russian aristocracy and a Massachusetts Institute of Technology graduate, would fly multiple Project Zebra missions, sitting on a floor in between a Soviet pilot and his American instructor attempting to outshout massive twin engines roaring above their heads. The Prince, as he was jokingly nicknamed by his colleagues, developed strong personal bonds with Soviet officers, overlooking tragic experiences of his own family forced to flee Russia after the 1917 October revolution.

Saturday’s commemorative events in Elizabeth City were attended by a large Russian delegation. Russia’s ambassador to the United States, Anatoly Antonov, said he was deeply touched by the enthusiasm of Americans, their hospitality and "genuine interest." A Sputnik correspondent at the scene reported that the turnout far exceeded the sitting capacity of the local museum hall but people still stood in the aisle and along the walls.