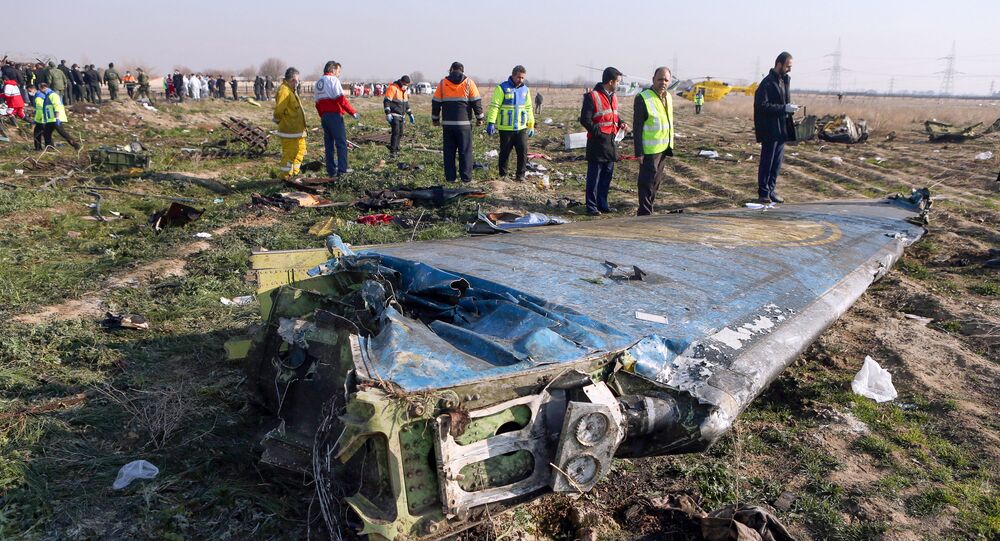 The Ukrainian Boeing 737 with 176 on board came down early on Wednesday, shortly after it took off from Tehran airport. 63 Canadian national were among passengers.

Canada's Foreign Minister Francois-Philippe Champagne, in a phone call with his Iranian counterpart, stressed the need for Ottawa to be granted access to help Tehran in the plane crash probe.

"Minister Champagne stressed the need for Canadian officials to be quickly granted access to Iran to provide consular services, help with identification of the deceased and take part in the investigation of the crash," a readout of the conversation said.

Earlier in the day, Iran's Foreign Ministry stated that Foreign Minister Mohammad Javad Zarif has discussed the Ukrainian International Airlines plane's crash during a phone conversation with his Canadian counterpart.

"Canadian Foreign Minister François-Philippe Champagne had a phone conversation with his Iranian counterpart Mohammad Javad Zarif on Thursday morning. During the phone call, the two sides conferred on the recent crash of a Ukrainian plane in Tehran as well as other issues of mutual interest," the ministry said in a statement.

The Boeing 737-800 plane en route from Tehran to Kiev, which was carrying 167 passengers from Iran, Ukraine, Canada, the UK, Germany, and Sweden, as well as nine crew members, crashed on Wednesday near Tehran's Imam Khomeini International Airport soon after take-off, killing all people on board.

The air disaster poses a challenge for Canadian officials, who are now tasked with repatriating the bodies and getting answers as to the cause of the crash.

Canada has not had a diplomatic presence in Iran since 2012, when the government of then Prime Minister Steven Harper ended diplomatic relations between the two nations citing Iran’s support for Syrian President Bashar Assad.

Meanwhile, Ukraine's National Security and Defense Council has listed several possible reasons behind the incident, including an attack by an anti-aircraft missile, an explosion resulting from a terror attack, and an engine explosion due to a technical malfunction.