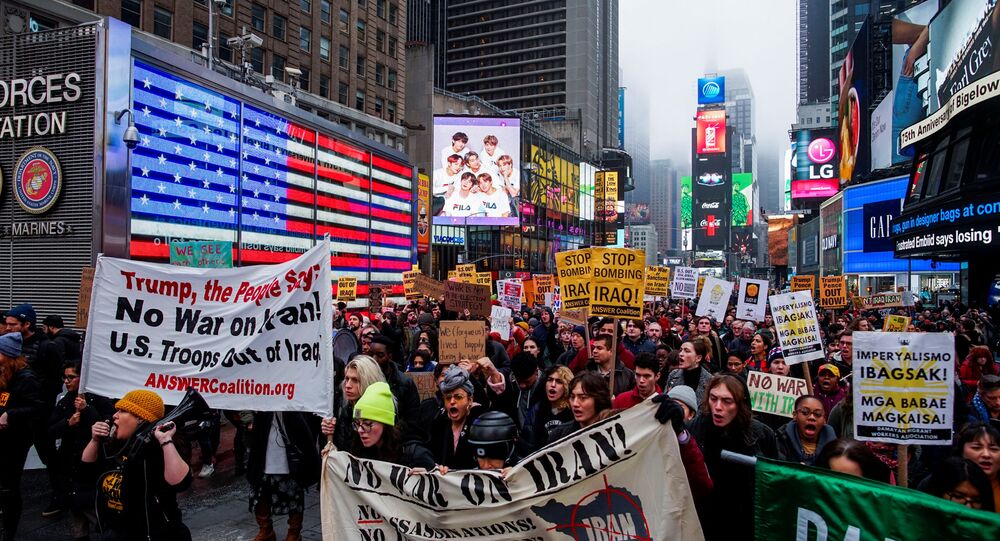 A day after Iran fired dozens of missiles at US forces in Iraq in retaliation for the assassination of a top Iranian general, US antiwar protesters took to the streets to demand the Trump administration leave Iraq and cease provoking Iran. The protests follow massive anti-war demonstrations over the weekend.

Antiwar protesters demonstrated across the US Wednesday against further conflict with Iran and violations of Iraqi sovereignty.

Protesters from anti-war groups Code Pink, Popular Resistance and the ANSWER (Act Now to Stop War and End Racism) Coalition gathered in front of the White House, singing and forming a “speak out” where passers-by and attendees could voice their thoughts on the US presence in the Middle East.

"It is Trump and his administration which bear the full responsibility for the threat of a new and devastating war," Richard Becker, a representative of the ANSWER Coalition, said in a statement. "Prior to the assassination of Soleimani, Trump illegally broke the JCPOA, the Joint Comprehensive Plan of Action, also known as the Iran nuclear deal. The administration imposed harsh sanctions on Iran – really an act of war – seeking to strangle the economy and cause maximum suffering for the more than 80 million Iranian people."

"Trump’s decision today to not immediately strike back at Iran does not end the war threat whatsoever. Trump’s bellicose, threatening and offensive speech will keep tensions in the region boiling hot," reads a Wednesday statement by the group that was obtained by Sputnik.

"By framing his decision to not militarily escalate at this moment because of the lack of American casualties, Trump has created his own 'red line' — the deaths of U.S. soldiers — which if crossed could send the U.S. and the whole region hurtling towards war," the statement continues. "That remains a very distinct possibility given that many thousands of U.S. troops remain in Iraq against the will of the people and government."

"We're relieved" there's #NoWarWithIran, @KBZeese from @PopResistance said, "but the US needs to get out of the Middle East" before it does start such a conflict. pic.twitter.com/FkQPR2BxP6

On less than a day’s notice, Atlantans turned out downtown to say No War! The building of an antiwar movement has broad-based support. #NoWarOnIran pic.twitter.com/t5pCSdwLxI

​The protests followed a weekend of much larger demonstrations in more than 70 US cities. The protest in Washington, DC, drew more than 1,000 attendees, and others in New York and Los Angeles were of a similar size.

​The Saturday protests followed the Friday assassination of Gen. Qasem Soleimani, commander of Iran’s elite Quds Force, in a US drone strike at Baghdad International Airport. Trump claimed the strike was “defensive” and that Soleimani was plotting “imminent” attacks against US forces. He was laid to rest in his hometown of Kerman on Tuesday.

Protests Against Killing of Soleimani Held Outside US Embassy in New Delhi - Photo, Video