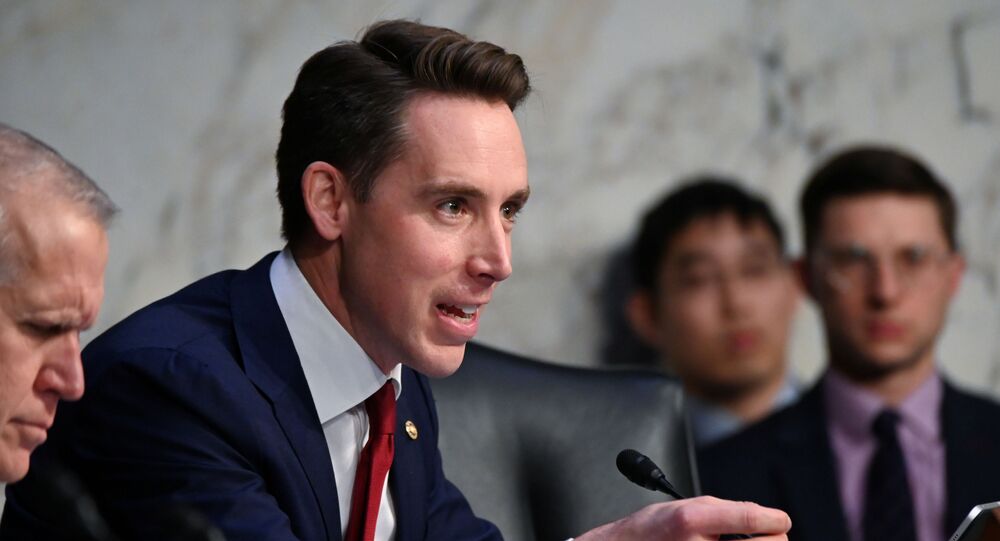 WASHINGTON(Sputnik) - US House of Representatives Speaker Nancy Pelosi's refusal to submit articles of impeachment against President Donald Trump to the Senate prompted a group of Republican Senators to seek a vote to summarily dismiss the entire case, Senator Josh Hawley said in a press release on Monday.

"If Speaker Pelosi is afraid to try her case, the articles should be dismissed for failure to prosecute and Congress should get back to doing the people's business", Hawley said.

....followed, and then it was withdrawn. The Democrats argument for impeachment has not gotten stronger over the last few weeks. As Senator Josh Hawley just said, he’s going to enter a Motion to Dismiss the Impeachment Trial because it's never actually been brought to trial.”

The two-thirds Senate vote needed to convict Trump and remove him from office has long been considered a long-shot in the Republican-led Senate, in part because the House impeachment was a purely partisan effort without a single vote from a Republican lawmaker.

My proposal will take form of motion to update Senate impeachment rules to account for this unprecedented attempt to obstruct Senate trial. Stay tuned

Hawley was joined by nine other senators as original co-sponsors for a resolution that would alter Senate rules so that a dismissal vote could be held without the impeachment articles in hand.

"Speaker Pelosi cannot dictate how the Senate operates", Senator Ted Cruz said in the release. "If she refuses to send the articles of impeachment to the Senate, the Senate should be able to dismiss them".

Pelosi is demanding Senate testimony from current and former Trump administration officials, including White House Chief of Staff Mick Mulvaney and former National Security Adviser John Bolton, as the price for submitting the House impeachment articles to the Senate.

Bolton said earlier on Monday that he was willing to testify if subpoenaed.

House Democrats launched an impeachment inquiry into President Trump over a whistle-blower's complaint about his 25 July call with Ukrainian president Volodymyr Zelensky. The whistleblower, who preferred to speak on condition of anonymity, alleged that Trump pressured Ukraine's leader to investigate into potential corruption involving former US Vice President Joe Biden and his son.

Trump has dismissed the attempts to impeach him as another "witch-hunt" and released the memo of his July conversation with Zelensky.

It was also revealed later that the information provided by the so-called whistleblower was "something he heard from somebody else", therefore, US Republicans do not see this information as a reliable basis for the president's impeachment.