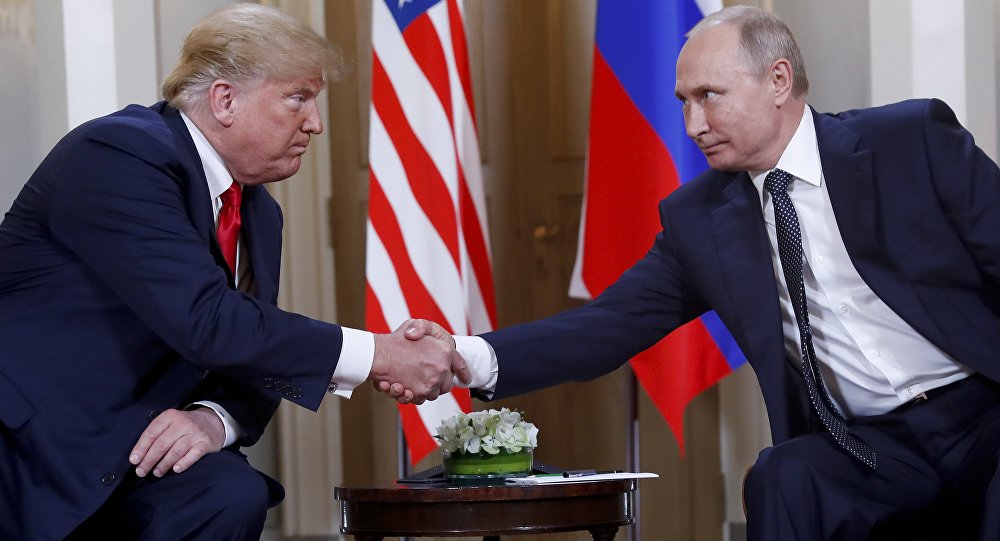 The Russian President and his US counterpart had a phone conversation a few days ago; Vladimir Putin called Donald Trump to thank him for information that helped to prevent a terrorist attack in Russia, as Trump commended "a great and important coordination" with Russia.

The US President reprimanded his former national security adviser Michael Flynn and other senior staff members for not informing him about a phone call from Russian President Vladimir Putin weeks after Donald Trump won the presidency, according to a new book, "Trump and His Generals: The Cost of Chaos," that shed light on the current US administration's relationship with the Pentagon, Business Insider reports.

In the book, penned by veteran national security reporter Peter Bergen, an account is given of a conversation between the US president and his staffers on 27 January 2017. At the time, Trump was hosting British Prime Minister Theresa May - his first official visit from a foreign leader at the White House.

During lunch, May asked Trump if he had spoken with Putin, according to Bergen.

"Sir, we're arranging that call now. President Putin called several days ago, but we haven't been able to get it on your calendar yet."

An irate Trump lashed out at Flynn.

"Are you kidding me? Vladimir Putin tried to call me, and you didn't put him through? What the hell were you thinking?" Trump is cited as saying.

"Well, sir, you know, you have a lot of calls coming in, and we're trying to manage who you talk to," responded Flynn.

According to the book, Donald Trump called Putin "the only man on Earth who can destroy us" as he questioned his staff's decision to hold off on the phone call.

"What kind of bulls*** is this? How is it possible that Putin calls me and you don't put the call through? I don't know what you guys are doing," Trump later privately reprimanded senior staff members, according to the book, material for which was sourced from interviews with current and former White House officials and military officers.

According to cited White House records, Trump later had a "congratulatory" one-hour phone call with Putin on 28 January 2017 that touched upon topics ranging from the fight against the Islamic State to the conflict in Syria. The conversation was described as "positive" and "a significant start to improving the relationship between the United States and Russia".

Vladimir Putin and then-president-elect Donald Trump had their first telephone conversation on 14 November, 2016, to "develop a dialogue of partnership".

Just recently, the two presidents spoke over the phone as Russia’s President called Donald Trump to thank him for information that helped to prevent a terrorist attack in Russia.

Trump on 31 December tweeted that "President Putin of Russia called to thank me and the US for informing them of a planned terrorist attack in the very beautiful city of Saint Petersburg."

President Putin of Russia called to thank me and the U.S. for informing them of a planned terrorist attack in the very beautiful city of Saint Petersburg. They were able to quickly apprehend the suspects, with many lives being saved. Great & important coordination!

​On 29 December, the Russian Federal Security Service (FSB) said it had detained two Russian citizens for plotting an attack in St. Petersburg which would have occurred during the city's New Year's Eve celebrations.

In their phone conversation, both leaders also discussed the state of bilateral relations and efforts to strengthen arms control, according to Russian and US officials.

The relationship between Vladimir Putin and Donald Trump has been intensely scrutinised by Congress and in the Russia investigation led by special counsel Robert Mueller, after the US President’s opponents accused his team of colluding with Moscow after his victory in the 2016 presidential election.

They also put forward unsubstantiated claims that Russia had carried out a cyberattack on Democratic National Committee servers to aid Trump, which Moscow denied as baseless.

Ex-FBI head Robert Mueller was appointed Special Counsel for the United States Department of Justice to probe alleged "Russian meddling" and after about two years of investigating, published a report in April 2019, basically stating that he had found insubstantial evidence to prove that Trump had colluded with the Kremlin.

Russia has repeatedly denied any claims of interference in the US elections and in the US political system.

It is routine for high-level phone calls between the US president and foreign leaders - usually listened to by key staff members - to be prepared for in advance.

Currently, Donald Trump's senior aides have further restricted the number of administration officials allowed to listen to the US President's phone calls with foreign leaders, according White House sources cited earlier by CNN.

The new developments are said to be part of an effort to limit those with access to the calls to only the President's senior-most aides.
According to a White House official:

"Nobody is allowed on the calls. The barn door officially closed after the horse escaped."

The reportedly introduced changes stem from the fallout in the wake of Trump’s 25 July call with Ukraine's President Volodymyr Zelensky, which formed the centrepiece for the subsequent impeachment probe launched by the Democrats.

The House of Representatives passed two articles of impeachment against Trump last month. The first charged him with abuse power as US president, in order to try and compel Ukraine to investigate Democratic presidential candidate and former US Vice President Joe Biden; the other article accuses Trump of obstructing the congressional investigation into that affair. 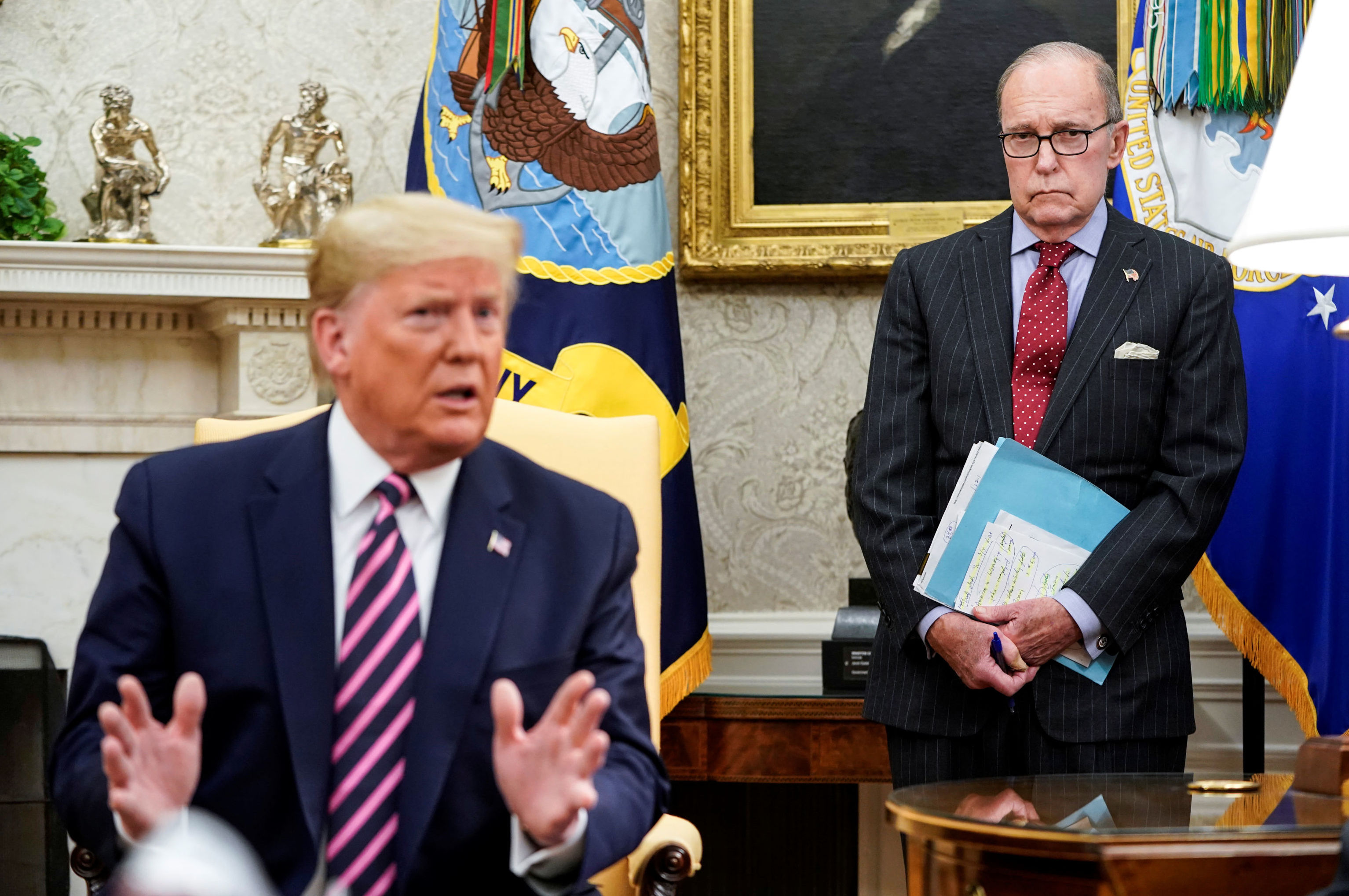 © REUTERS / JOSHUA ROBERTS
Director of the National Economic Council Larry Kudlow watches as U.S. President Donald Trump speaks with Republican members of Congress a day after the House of Representatives approved articles of impeachment against the Republican president, at the White House in Washington, U.S., December 19, 2019

The impeachment inquiry against Donald Trump was initiated by US House Democrats in September after a whistle-blower complaint claimed that the American President may have abused his power by allegedly using US military aid to Ukraine as leverage to pressure President Volodymyr Zelensky during a 25 July phone call to investigate the activities of former Vice President Joe Biden and his son Hunter, who sat on the board of a local energy company, Burisma.

Donald Trump has denied any wrongdoing, releasing the transcript of the call and branding the impeachment inquiry as another round of “witch hunt garbage” aimed at discrediting him ahead of the 2020 vote.