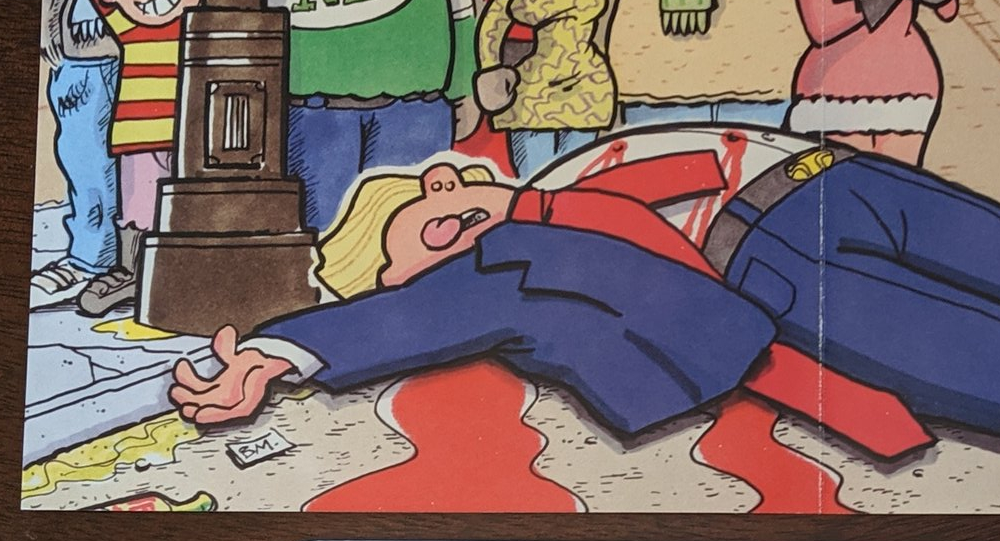 Representative Mike Johnson (R-LA) slammed the “radical Left” and alerted the US Secret Service via social media earlier this week after a staffer in his office opened a Christmas card showing Americans celebrating the murder of US President Donald Trump.

Christmas may be over, but the belated opening of a Christmas card from pornographic magazine Hustler brought about holiday outrage from the Louisiana congressman.

“Here's all you need to know about the radical Left. A young staffer of mine opened this in a stack of holiday mail today,” Johnson said in a Thursday tweet.

“I just shot Donald Trump on Fifth Avenue, and no one arrested me,” reads one portion of the Christmas card. The other half of the card shows the murderer, Americans and even Santa Claus himself rejoicing as a rotund, lifeless corpse resembling Trump bleeds out onto the streets of New York.

Here's all you need to know about the radical Left. A young staffer of mine opened this in a stack of holiday mail today. Just imagine if a conservative had distributed such a disgusting and hateful piece about a Democrat. I hope this will be investigated by the @secretservice pic.twitter.com/0q4FRQGdkY

The cartoon plays off a remark uttered by Trump during the 2016 presidential campaign.

"I could stand in the middle of Fifth Avenue and shoot somebody, and I would not lose any voters, OK?" he said during an Iowa campaign rally in January 2016.

Naturally, many netizens expressed outrage over the depiction of the president’s murder, and some even agreed that the cartoon warranted a Secret Service investigation.

Whoever designed this card needs to be arrested.

This is the Left. They think this garbage is funny. All self-respecting Democrats should condemn this kind of thing but they won’t. Because the complicit fake news media won’t even let them see it. Disgusting.

I thought that too. Using the @USPS to make a threat is a federal offense itself.

A number of other Twitter users pointed out that even if the Secret Service deemed the piece out of the bounds of free speech - which is protected under the First Amendment of the US Constitution - the federal law enforcement agency had a very obvious lead on the perpetrators.

I hope the Secret Service can figure out who did this 🧐 pic.twitter.com/HhfZ6ViqWU

This is not the first time that Trump has been in Hustler’s crosshairs. Back in 2017, Larry Flynt, the magazine’s publisher and founder, took out a full-page ad in the Washington Post offering up to $10 million for “information leading to the impeachment” of Trump and his “removal from office.”

So I decided to do this...let's see what happens. pic.twitter.com/Xpy4qrwHU7

Despite Johnson tagging the Secret Service in his tweet, the law enforcement agency did not acknowledge the informal request for a federal investigation with any public response via social media.