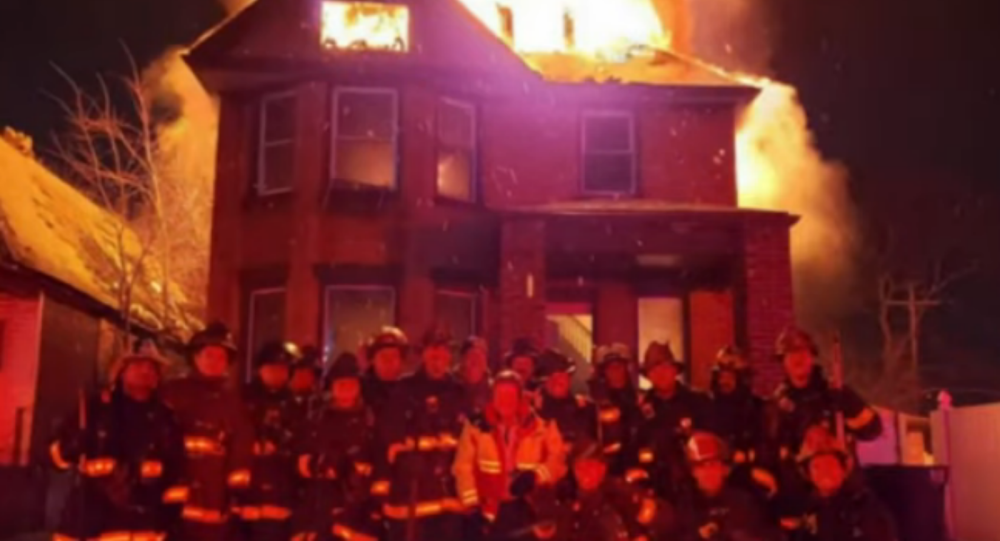 Under Fire: US First Responders Probed for Taking Photo in Front of Burning Home

This holiday season, Michigan’s Detroit Fire Department is receiving major backlash after more than a dozen of its firefighters rang in the new year by posing for a photo in front of a burning house.

Dave Fornell, deputy fire commissioner at the City of Detroit, told the Detroit News that the photo was taken Tuesday on the 600 block of Green Street on the city's west side after authorities were alerted to a fire that broke out at roughly at 6:34 p.m. local time.

The image, posted on the Detroit Fire Incident Facebook page, shows several smiling firefighters posing in front of a vacant, burning home, and includes the caption: “Crews take a moment to get a selfie on New Years!"

.@DetroitFire is investigating after this photo was posted NYE on Facebook.
“There are a lot of ways to celebrate a retirement. Taking a photo in front of a building on fire is not one of them” - Fire Commissioner Eric Jones pic.twitter.com/lzTwUUXWSs

The original post has since been deleted; however, numerous screenshots were quickly snapped before it was taken down.

Here’s the house today in SW Detroit.@detroitfire says the home was vacant. The one next to it is as well.
Dep. Commissioner Dave Fornell tells me fire crews could not go inside last night and could only defensively attack the fire. pic.twitter.com/BiG7stPPfR

In the aftermath, the Detroit Fire Incident Facebook responded, explaining that no one managing the social media page was involved in taking the photo and that the page was asked to share the content by a Detroit firefighter.

“The only reason [the photo] was removed is we received messages by guys on the job stating that they had been threatened for the photo being posted,” the post reads. “To clarify, ‘threatened’ meaning threatened by their work I would assume by their context threatened of punitive actions.”

In a statement to Detroit news station WXYZ, a displeased Detroit Fire Commissioner Eric Jones said that the image was taken to celebrate the retirement of a fire battalion chief. “There are a lot of ways to celebrate a retirement. Taking a photo in front of a building fire is not one of them,” he said.

An investigation into the matter has since been launched. Jones further told the outlet that should the photo be verified, “discipline will be in order.”