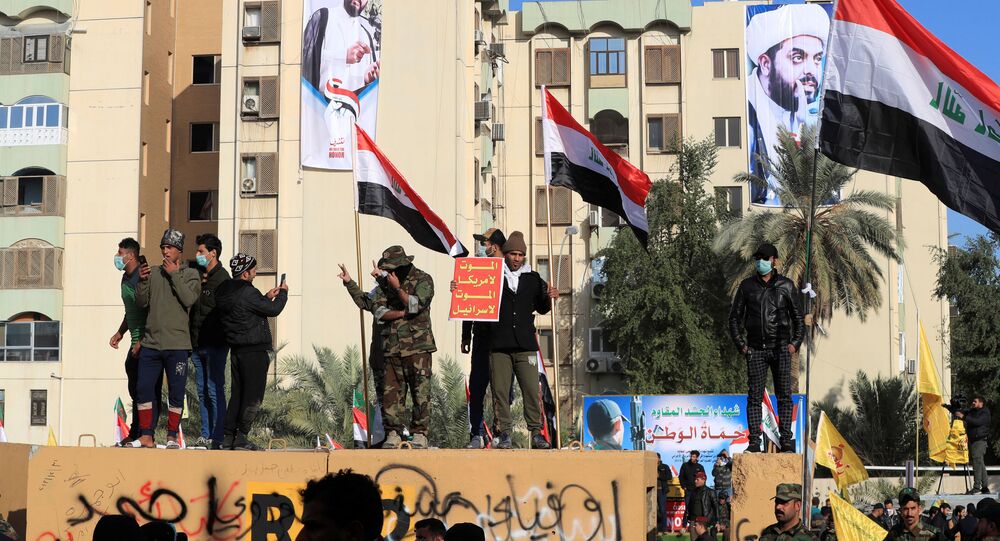 The Pentagon earlier targeted the facilities of Kataib Hezbollah, which belongs to Hashd al-Shabi, in Iraq and Syria for allegedly launching a rocket attack on a base in Kirkuk that killed a US contractor.

US Defence Secretary Mark Esper stated that Washington would respond and take pre-emptive action to protect personnel in Iraq.

"He [US President Donald Trump] is committed to defending our interests, our personnel, our friends in the region and of course standing up to Iran and deterring Iranian bad behaviour. We will either respond or take pre-emptive action as necessary to make sure that we defend those interests", Esper told the TV channel Fox.

He continued on by saying that Washington expects more attacks from "Iran-backed" groups and that they will "regret it".

"The provocative behaviour has been out there for months... So do I think they may do something? Yes. And they will likely regret it. We are prepared to exercise self-defence, and we are prepared to deter further bad behaviour from these groups, all of which are sponsored, directed and resourced by Iran", Esper told reporters.

He added that the Pentagon would continue to beef up its forces in the region to protect "diplomats or American citizens or military personnel".

"At the same time I know Secretary [of State Mike] Pompeo is working aggressively to talk to our allies and partners whether they are in the immediate region or beyond to build political support for what we are doing", Esper said.

Esper also called on the international community to condemn Iran’s behaviour and help the United States with its maximum pressure campaign.

© REUTERS / Thaier al-Sudani
Protests Outside US Embassy in Baghdad Resume for Day 2 - Video
Hashd al-Shabi, also known as the Popular Mobilisation Forces, said that its supporters attacked the US Embassy in Baghdad after dozens of its fighters were murdered in the US strikes. They torched the fence, forcing US guards to take cover. The United States stated that it would send extra troops to Baghdad.

The Iraqi president and prime minister condemned the embassy siege, in which a part of the fence was set alight. US Secretary of State Mike Pompeo said no one was hurt and that there were no plans to evacuate the staff. The Pentagon has dispatched marines to ensure the diplomats' safety.

Iran's Foreign Ministry on 31 December dismissed the "empty" accusations coming out of Washington about Tehran allegedly orchestrating the attacks on the US Embassy in Iraq. The ministry also called on Washington to reject its "destructive policies" in the Middle East.