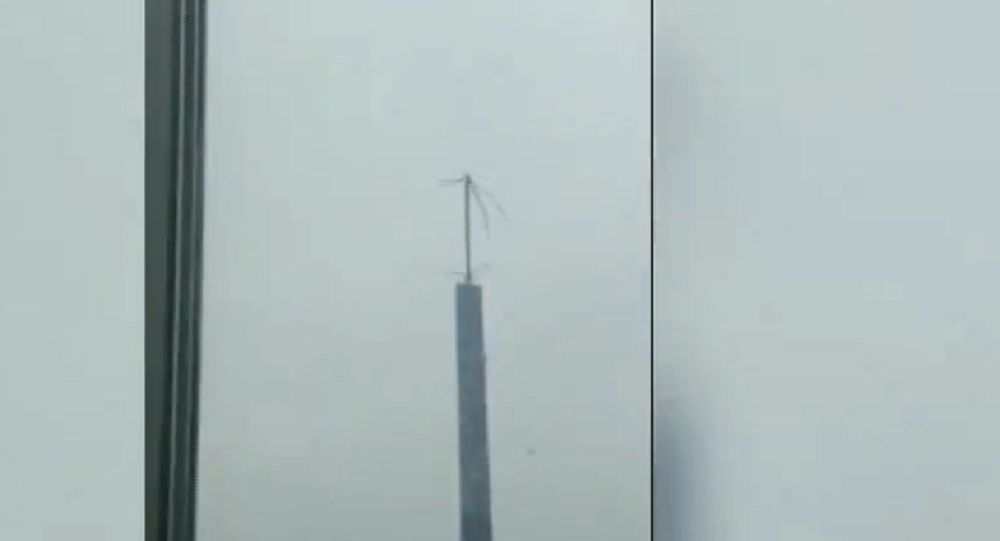 A dramatic gust of wind on Monday turned a powerful 250-feet (76 meters) turbine into debris in the Co-op City (Cooperative City) of the Bronx in New York. Caught on video, fragments of the power installation were seen falling on vehicles parked nearby.

According to local media reports, there were no injuries as eyewitnesses saw the turbine blades spin out of control and fall down, along with parts of a three-paneled billboard, onto a 7 Eleven store and mall parking lot on Baychester Avenue.

CRAZY: Wind turbine breaks and falls over CO-OP City and all caught on video! @News12BX pic.twitter.com/tWBBVsY42r

​A spokesperson for the New York City Department of Buildings said an investigation is ongoing and that violations were issued to the owner for failure to maintain the billboard and the turbine's monopole, according to The Daily Mail. An order to suspend all works was also reportedly issued, restricting entry into three commercial businesses impacted by the incident.

According to a media report, the crushed turbine had seen a record of serious grievances from local residents who earlier opposed its construction, despite prospects to supply energy to Co-op City.

BREAKING: The newly-installed wind turbine at 500 Baychester Ave. has collapsed, or been blown over, and destroyed the three-sided illuminated billboard already on the property. @FDNY is on the scene. Riverbay officials tell the Times no one was hurt. pic.twitter.com/V6SAFUpDie

​The complaints against the wind turbine were reportedly filed, along with the billboard - which has three digital panels displaying advertisements - and which annoyingly plays 24 hours per day and can be reportedly seen for miles.

The complaints reportedly drew the attention of local officials but no action was taken, as the owner of the signs completed construction of the wind turbine. The property owner, however, was reportedly denied a NYC Department of Buildings permit for another billboard and decided instead to install a wind turbine.

Local authorities have launched an investigation into the incident.