First Lady Melania Trump’s wardrobe choices sharply differ from those of her First Lady predecessors, often coming under scrutiny in the press and on social media, with many perceiving a hidden meaning to her sartorial choices.

When it comes to Melania Trump’s wardrobe choices, there are no coincidences, it is claimed in a recent book offering a behind-the-scenes glimpse into the life of the enigmatic FLOTUS.

The First Lady, while often praised for her fashion sense, has broken with tradition in many ways during her tenure in the White House, with the media often swooping in on perceived clothing controversies.

There might be more hidden meaning than would appear to FLOTUS’s outfits, according to member of the White House press corps Kate Bennett.

"Having covered her for as long as I have, each thing she does has meaning to it, even the clothing she wears", Bennett wrote.

In her book titled "Free, Melania: The Unauthorized Biography", which hit the shelves on 3 December, the author floated her own guesses as to some of the non-verbal, but emphatic statements the First Lady might possibly have sought to convey via specific colours, designers, and price tags.

The pink "pussy-bow" blouse Melania Trump donned for the October 2016 presidential debate, claims Bennett, was a glaring example of no coincidences in Melania's wardrobe choices, as it suggested an uncanny connection to one of then-candidate Trump's biggest scandals.

The debate came two days after the "Access Hollywood" tape had leaked, showing Donald Trump saying in 2005 he could "grab" women "by the p***y" because "when you're a star they let you do it".

Melania wore a $1,100 pink pussy-bow Gucci shirt to the event, and stood smiling beside her husband.

As her husband Donald Trump won the election and became US president, Melania Trump made an elegantly monochromatic entrance into the White House, wearing a powder blue Ralph Lauren ensemble that had many drawing comparisons to former first lady and American fashion icon Jackie Kennedy.

© Sputnik / Alexei Agaryshev
President Donald Trump and his wife Melania during the inauguration in Washington.

Bennett believes this was one of the outfits the First Lady contributed the most, reflecting her vision of how she would like to be first acknowledged in her new role.

For the 2018 and 2019 State of the Union speeches, Melania Trump chose outfits that signaled a desire to “stand out”, according to Bennett.

In 2018, FLOTUS wore a white pantsuit that was a bright speck in a sea of black-clad Democrats who were honouring the Time's Up and #MeToo movements, while in 2019, Melania Trump’s Burberry coatdress similarly stood out against the backdrop of white outfits worn on the other side of the aisle to celebrate women's suffrage.

Last night, Melania Trump wore this gorgeous navy blue Burberry coat to the State of the Union. She topped off the look with her classic Manolo Blahnik pumps and black leather gloves by Bottega Veneta. 2/5/2019 #SOTU #PoweroftheFirstLady pic.twitter.com/j0BiRXCrNb

A ‘Nod to the Guest’

Some of the outfit choices by the First Lady might in be deference to her guests when she assumes the role of host, says Bennett, as she offers the example of the Hervé Pierre green dress that could have been in honour of the Jordanian flag while FLOTUS greeted Queen Raina of Jordan in Washington.

Bennett also surmised that the massive gold belt and necklace Melania Trump wore in Saudi Arabia during the Trumps' visit there in May 2017 was a nod to the Kingdom.

One of the clothing controversies the media have on occasion swooped in on were instances when the First Lady wore a coat that's propped up on her shoulders.
This, says Bennett, can be seen as a "rich person move”, giving off a VIP vibe.

Bennett credits the First Lady, who "pretty much single-handedly brought back the coat as a principal player", and claims by perching the coat on her shoulders, limiting her range of motion, Melania Trump highlights that she is able to “get doors opened and things carried for her”.

Jacket With a Message

In one of the most chewed over episodes, FLOTUS wore a garment that sparked a tide of criticism.

Melania Trump wore a designer khaki jacket with a print on the back reading: "I really don't care, do u?" as she boarded a flight to Texas to visit a detention camp for immigrant children.

What did you say, Melania? The message on your jacket was so loud that I couldn’t hear you! pic.twitter.com/nJFNYbNgpo

​Critics lambasted the First Lady’s alleged careless attitude to the children of illegal Latin American immigrants separated from their families as they attempted to illegally cross into the US.

Months after the jacket's debut the First Lady explained that the wording was targeted at her critics on the left.

"It was for the people and for the left-wing media who are criticising me", she said in an ABC News interview.

"I believed, and still do, that the jacket was a facetious jab at Ivanka and her near-constant attempts to attach herself for positive administration talking points", Bennett wrote.

Bennett also described the First Lady's relationship with Ivanka as "cordial, not close", and that her stepdaughter's formal role as a senior adviser "intimidated" Melania.

Critics had a field day with Melania Trump’s choice of stiletto heels worn to board Marine One at the White House for a visit to hurricane-ravaged Puerto Rico in October 2017.

The First Lady, however, did change into a pair of Timberland boots upon arrival. More than a year later, Melania appeared to wear the very same pair of boots for a military appearance, with critics seething at FLOTUS for seeming "out of touch," as they were not combat boots.

The First Lady prompted a social media storm with the “chic woman on safari” look she picked for her African tour, which was also her first solo foreign journey. 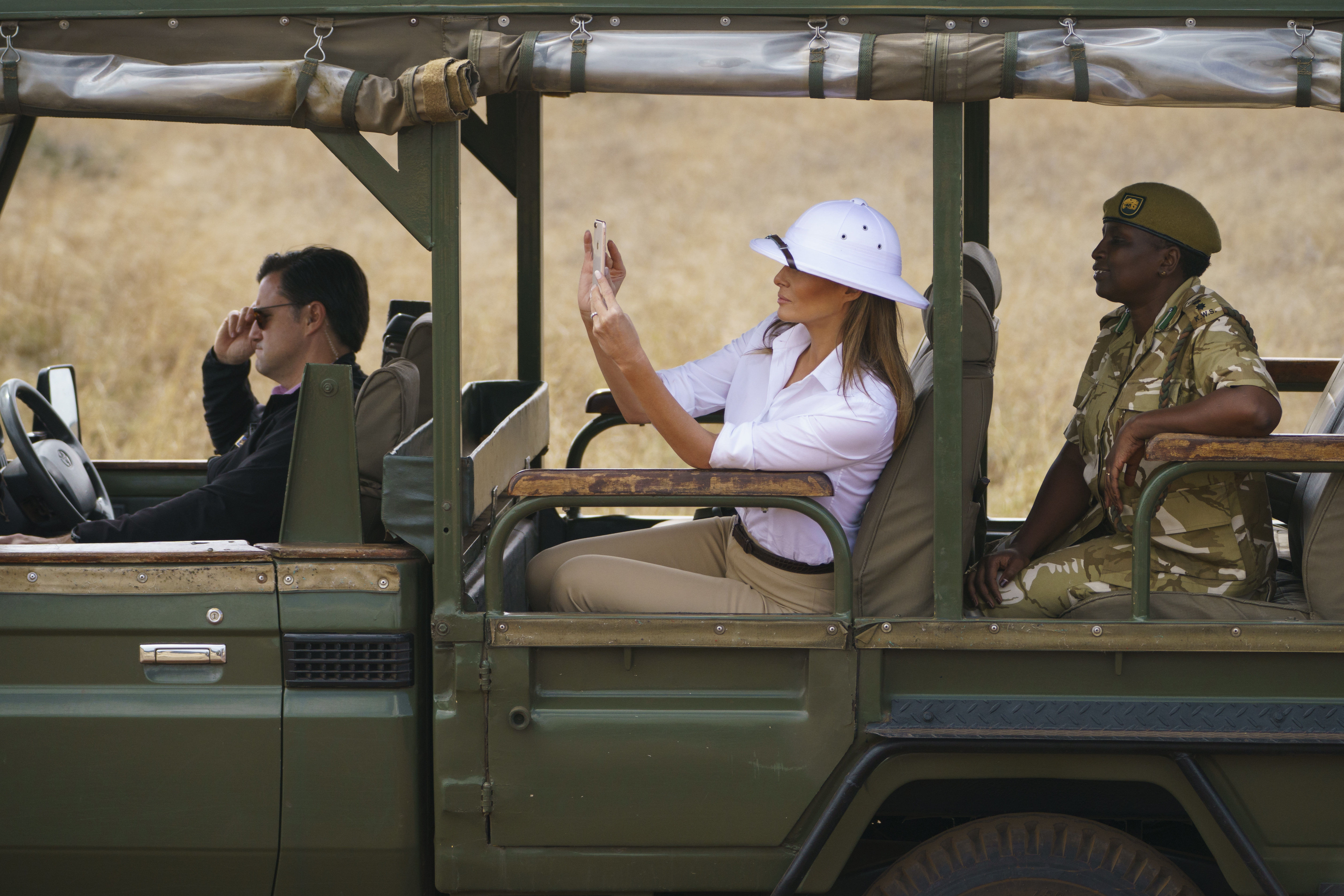 She was wearing chinos, safari jackets, riding pants and boots as well as cotton shirts and khaki linens, but it was the white pith helmet she wore on the day before her departure that enraged critics, for evoking unpleasant memories of colonial rule in Africa.

Kate Bennett sums up by emphasising that the First Lady and her staff are notoriously close-lipped regarding any “hidden messages” behind Melania Trump’s clothing choices, so any references evoked by wardrobe choices remain guesswork, no more.

From ‘I Don’t Care’ Fashion Picks to Nude Photos: First Lady Melania Set to Be Best at Turning Heads