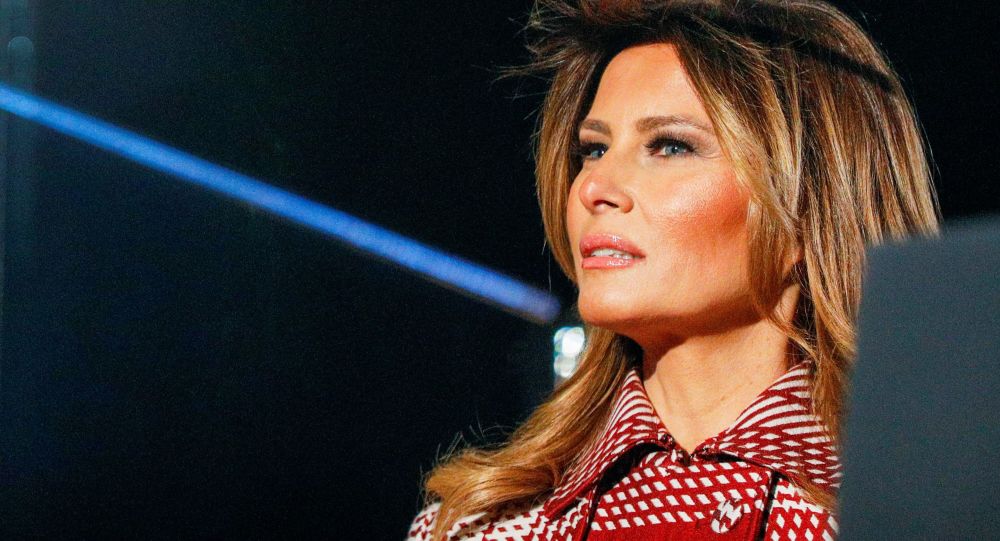 First lady Melania Trump has been criticised for her facial expressions when with her husband, US President Donald Trump, and public perception highlights her often stern look during press conferences.

First Lady Melania Trump, who often smiles at events as part of her Be Best initiative, comes across as “stern”, or “angry” when with her husband, US President Donald Trump, according to public perception.

An expert claims to have cracked the mystery behind the First Lady’s poker face.

It’s all down to her Slovenian culture, according to "Free, Melania: The Unauthorized Biography" by CNN reporter Kate Bennett.

Bennett wrote in her book, which aspires to offer a new look at the enigmatic First Lady’s behind-the-scenes life:

“Maintaining a smile merely for effect was not a Melania thing to do. She was not a faker - not then, not during the campaign, and not as the first lady."

The author, whose book came out on 3 December 2019, continued:

“The number of times people ask me, “what’s wrong with her? Why does she look so angry?” when they see her unsmiling, standing next to Trump as he stops to talk to the press on his way to the helicopter is a lot. What most people don’t understand is Melania’s heritage and the country in which she was born. In Slovenia, smiling a nongenuine smile isn’t really a thing.”

“Though her smiles were less frequent than the pinned-on grins radiating from her stepchildren and their offspring that June day at Trump Tower. Melania was not necessarily unhappy, she was just, as she often is, doing what felt natural.”

Melania Trump, 49, has been dubbed one of the most silent First Ladies in history.

The Slovenian former model, who married the then real estate mogul Donald Trump in 2005, is no open book and is regularly described as “enigmatic” or a “mystery”, with her poker face and model’s poise.

The public often tends to project on to press-wary Melania Trump’s silences and lack of a ready smile – with their surmises ranging from calling her a hostage in a gilded cage, to outrageous conspiracy theorists’ claims that she’s been replaced by a body double.

In July 2018 Buckingham Palace guard Robert Addington told reporters how impressed he was by Melania Trump’s ability to never crack a smile on her visit to London.

“There were all sorts of people waving in her face and yelling things at her, hoping that she would break, but she managed to hold that same stern, emotionless expression the entire time. It was incredible,” said Addington.

Donald Trump and his spouse made a “working visit” to the UK in July 2018, with the visit including a meeting with the Queen during the trip.

“Sentries go through months of training to maintain that kind stoicism, and Mrs. Trump’s abilities just blow us out of the water; she’s a natural. It’s inspiring,” Addington was quoted as saying by the ONION.

Netizens at the time had weighed in with comments deploring “lack of personality” in the First Lady:

It's not part of her programming.

Buckingham Palace Guards then realized who the joker is married to...

They should hire her as the first female Buckingham Palace guard. 😄

What would she have to smile about ?

She is doing a great job. She is always watched and under pressure not easy to have every move micro analysed

Never Too Late: Trump Says He Is 'Still Working' on Melania's Christmas Gift