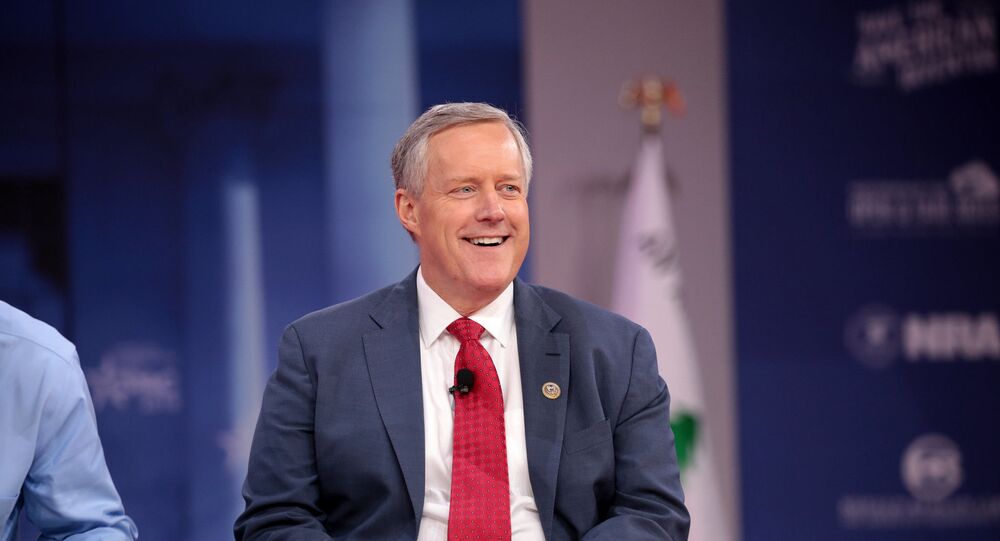 The lawmaker pledged to continue to work with the Trump administration as long as the latter remains in office, and facilitate the president’s re-election bid, but did not elaborate. It is not known what Meadows’s next position will be after his exit from the House.

Republican Representative Mark Meadows, famous for his consistent support of US President Donald Trump, announced Thursday that he will not seek re-election to Congress after his tenure ends in 2021, a Washington Post report says.

“For everything there is a season. After prayerful consideration and discussion with family, today I’m announcing that my time serving Western North Carolina in Congress will come to a close at the end of this term,” Meadows said in a statement, cited by WaPo. “This was a decision I struggled with greatly.”

Meadows noted that for the remainder of his tenure in the House, he will continue to work with the Trump administration, and, possibly, facilitate Trump’s re-election in 2020, but did not provide details. He said he would seek another job that would allow him to work with Trump “more closely.”

“My work with President Trump and his administration is only beginning,” he said in a short interview. “There’s a number of options, but I’ll certainly be helping the president and hopefully helping him get re-elected.”

“While there’s no immediate plans,” he told Politico, “there’s certainly discussions that have occurred and potentially could occur in the future.”

He added that Trump “has accomplished incredible results for the country in just 3 years,” and that he is “fully committed to staying in the fight with him and his team to build on those successes and deliver on his promises for the years to come.”

According to the Washington Post, three sources familiar with the matter confirmed that Meadows has been in talks with the president for months about possible next steps, suggesting leaving the House and taking on a high-profile role supporting the president’s reelection campaign.

Meadows is a co-founder of the so-called House Freedom Caucus, considered to be the furthest-right faction among House Republicans. The group acts in opposition to centrist Republicans, and is noted to have contributed to the early resignation of Speaker of the House John A. Boehner in 2015. According to WaPo, the caucus is “the most powerful group of lawmakers in Congress.”

The Washington Post’s Catie Edmondson and Eileen Sullivan speculated that Meadows’s resignation was motivated by frustration over a lack of power in a Democratic-controlled House. Meadows said, however, in the interview, that the group is now “more relevant than you might imagine,” despite the current majority of the Dems.

Since the beginning of the impeachment inquiry - initiated by House Democrats - Meadows has been a consistent Trump defender. The two politicians have often been spotted together, according to The Post, and in 2018 Meadows was considered for the position of Trump’s White House Chief of Staff.

Meadows’s announcement comes one day after the Dem-controlled House voted to impeach Donald Trump, making the latter the third president in US history to be impeached. Following the vote, Meadows tweeted his criticism of the Dems.

“Today will be remembered as the day your House Democrat majority voted to impeach President @realDonaldTrump for a crime they couldn’t find and a case they couldn’t prove. You won’t forget. And neither will we,” he tweeted Thursday.

Five Staffers Leave US Rep. Van Drew's Office Ahead of His 'Shift' to Republican Party - Reports

Why Don’t the Republicans Want Any Witnesses at the Impeachment Trial?