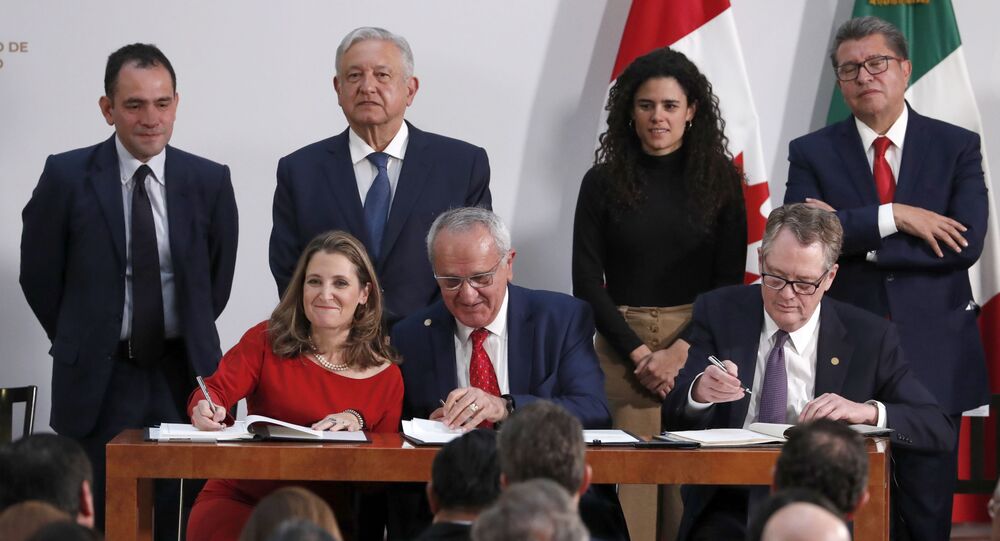 The US House of Representatives has passed a new trade deal that would supplant the 1994 North American Free Trade Agreement (NAFTA), providing a new basis for commerce between the US, Canada and Mexico. The pact will now be considered by the US Senate, which is unlikely to consider it before the new year.

The House passed the US-Mexico-Canada Agreement (USMCA) by a vote of 385 for and 41 against on Thursday, a major step toward the treaty's ratification by the United States. US President Donald Trump has pushed for the treaty, which would replace NAFTA, arguing the extant trade deal is unfair to US businesses.

“This vote today is a reminder that, even while the House was working to hold the President accountable for his abuses of office, we were still working hard to deliver on our promises to the American people to focus on economic opportunity,” Rep. Steny Hoyer (D-MD), who leads Democrats in the House, said prior to the vote.

The deal was tweaked by Democrats, who control the House, by adding more stringent environmental regulations and a mechanism by which to investigate labor abuses in Mexico, where many US companies moved their production centers since the 1994 deal was penned, due to weaker labor laws and lower wages.

USMCA would also update trade relations with new language for industries that did not exist in the early 1990s, such as internet, digital services and e-commerce, preserving the existing American model and extending it to Canada and Mexico. It would also require a higher percentage of parts used in automobiles come from North America - 75% - and that 40-45% of those parts come from areas with higher minimum wages, which Reuters notes refers to Canada and the US.

Jesus Seade, the Mexican Foreign Ministry's undersecretary for North America and a chief negotiator of Mexico's position in the treaty, said on Twitter Thursday afternoon that the House's approval was "historical," noting that while conflicts between Democrats and Republicans delayed the process of forming the treaty, it "allowed for a much better deal for Mexico" as well as "greater commitment and compliance" from both US parties.

​Earlier this week, Seade had blasted the US version of the treaty, which he said was different from that passed by the Mexican Senate, which did not include US labor inspectors able to move freely around Mexico. However, following reassurances by US Trade Representative Robert Lighthizer that they weren't labor inspectors and that they would be obliged to follow Mexican laws while in the country, the diplomat said he was "very satisfied" with the deal.

Canadian lawmakers have not yet approved the treaty and won't return from break until the end of January 2020. The deal was originally signed by the heads of state of the three nations in Buenos Aires, Argentina, in November 2018, during the G20 summit.

Just days ago, Lighthizer also noted phase one of a US-China trade deal was "totally done," a major step toward ending the nearly two-year-long tariff war that has hurt both US and Chinese businesses.