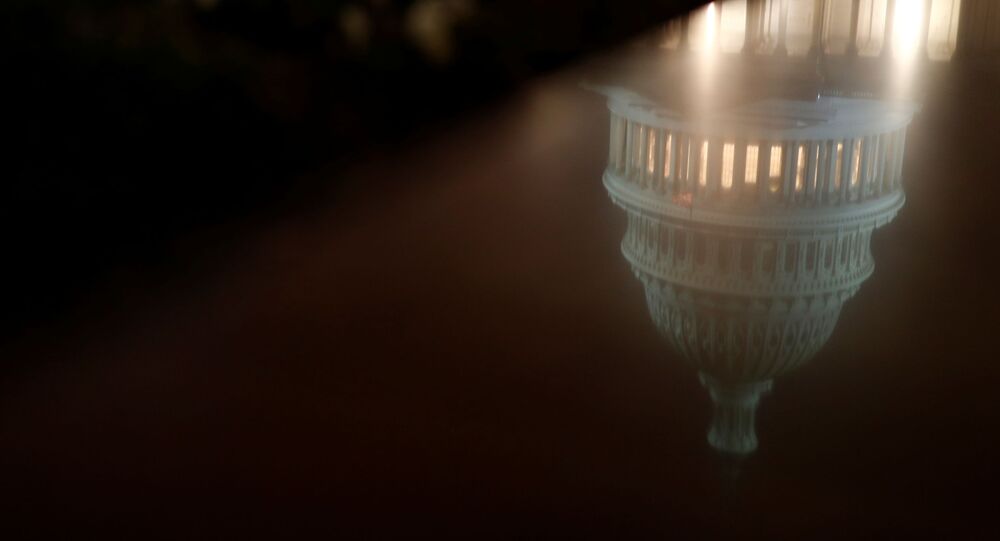 Ranking US lawmakers and prominent American politicians are seemingly in commotion after the US House of Representatives on Wednesday cemented Donald Trump as the third member in a historic roster of the nation's impeached presidents.

The White House and US President Donald Trump were the first to complain about the impeachment vote. Trump echoed his earlier statements during a rally of supporters in Michigan on Wednesday, condemning the move as "political suicide for the Democratic party". A spokeswoman for the White House, Stephanie Grisham, was more diplomatic, saying that Trump was prepared for possible "next steps" - an allusion to an upcoming vote to potentially remove Trump from office by the GOP-controlled Senate.

They’ve been planning to impeach him for 2.5 years - they couldn’t possibly hold back applause. Tonight, the Democrats actively cheered on their attempt at dividing our great nation. #Disgrace https://t.co/ibx6LREB69

​Among the first high-profile opponents and vocal critics of the US president to support the outcome of the vote, was political rival Joe Biden. Biden, who became one of the most cited figures of the impeachment hearings launched by Dems earlier this year, sententiously dubbed the outcome "a solemn moment for our country".

President Trump abused his power, violated his oath of office, and betrayed our nation. This is a solemn moment for our country. But in the United States of America, no one is above the law — not even the President.

​Almost simultaneously after the US House completed the vote on both articles, contenders for the final Democratic presidential nominee took to Twitter to express their satisfaction with a historic moment.

The House has voted to impeach Trump.

I commend Speaker Pelosi and those who voted to put our Constitution above politics.

It’s now up to us in the Senate to hold him accountable.

But this is not just about this moment or this president. It's about our democracy itself.

It's about the era to come after this president leaves office. More than ever, we need leadership to pick up the pieces and move our nation forward.

Donald Trump has abused our diplomatic relationships and undermined our national security for his own personal, political gain. By voting to impeach him, the House has taken an important step to hold him accountable. I'm ready to fulfill my constitutional duty in the Senate.

​Senator Bernie Sanders, a veteran Democrat, seemed to be more weighted in his comment and simply urged US Senate Majority Leader Mitch McConnell to conduct "a full and fair trial"

A trial in the Senate. Mitch McConnell must conduct a full and fair trial to hold this president accountable. https://t.co/GItUvoLbQe

​McConnell left a taciturn comment on social media, inviting everyone to follow his possible comprehensive evaluation of the situation on Thursday.

At 9:30am tomorrow morning, on the Senate floor, I will speak about House Democrats’ precedent-breaking impeachment of the President of the United States.

It also did not take too long to wait for a reaction from Trump's fellow Republican lawmakers. Some made video posts of supportive statements toward the US president in a somewhat interactive fashion. US Lawmaker Dan Crenshaw, a Navy SEAL veteran, criticized the impeachment process.

#HerestheTruth on the weakest case for impeachment this country has ever seen: pic.twitter.com/TUYFoVlnVC

​US House member Steve Womack posted photo evidence of his voting "No" to the impeachment against Trump.

I voted NO on both articles of impeachment. This is the first time in history that impeachment was moved forward on an entirely party-line vote. In fact, the only bipartisan support seen was against impeachment. This was a completely partisan process with a partisan result. pic.twitter.com/18RQc2C7cE

​Similar tweets were posted by Dan Newhouse and Hal Rogers.

I voted against the articles of impeachment because this is a shameful political charade that has divided our nation. Read my full statement at https://t.co/X8aVkKwAua or https://t.co/yYE1oof43U pic.twitter.com/5zeL5sxmr6

I voted NO on both articles of impeachment: pic.twitter.com/z8AGsiJ0HK

​Another prominent GOP legislator, Liz Cheney - daughter of the former US vice-president under George W. Bush - decorated her post with a #shamimpeachment tag and characterized Pelosi as "making a mockery of the Constitution".

No surprise that Speaker Pelosi is now refusing to send the Articles of Impeachment to the Senate - making a mockery of the Constitution, the rules of the House and every member of the House Democrat caucus who voted to impeach.#ShamImpeachment https://t.co/SBLKirrYjo

​Almost every other member of the Democratic Party – which has the majority in the lower chamber of the US government – supported the impeachment on late Wednesday, while the Republican Party and three Democrats – Collin Peterson, Jeff Van Drew and Jared Golden – opposed impeachment, the culmination of long-lasting hearings into allegations of Trump's violations of presidential authority after a whistleblower complained that the president pushed Ukrainian President Volodymyr Zelensky to investigate allegations of corrupt business practices by the Bidens in Ukraine.

The decision to remove Trump from office will be considered by the Senate in coming days, where the Republican Party has the majority of seats.