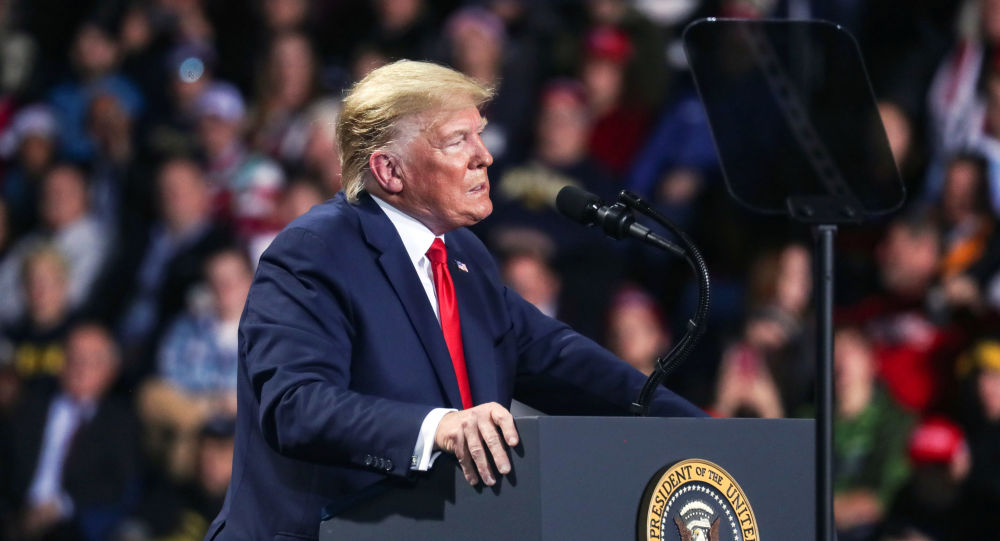 On Wednesday evening, the US House of Representatives voted in favor of impeaching President Donald Trump on charges of obstruction of Congress and abuse of power. A removal of office will be considered by the Senate, where the Republican Party has the majority of seats.

US President Donald Trump, reacting to the historic outcome of the House of Representative impeachment vote, while speaking at a campaign rally in Michigan, said that "every single Republican voted for us".

He also noted that three Democrats voted to not impeach.

"The Democrats always stick together. Think of it: 3 Democrats went over to our side. That's unheard of", he suggested.

While Democrats in Washington are trying to overturn the results of the 2016 election, real Americans are rallying behind @realDonaldTrump in the great state of Michigan tonight! pic.twitter.com/nZUeYxbeBW

“This lawless, partisan impeachment is a political suicide march for the Democrat Party”, Trump said at his Wednesday campaign.

"After three years of sinister witch hunts, hoaxes, scams, tonight the House Democrats are trying to nullify the ballots of tens of millions of patriotic Americans," President Trump says at a massive rally in Battle Creek, #Michigan#KeepAmericaGreat #MAGA #TrumpRally pic.twitter.com/iqsZ6dvXf9

Shortly before the US president commented on the outcomes of the impeachment vote in front of his supporters, the White House said in a statement that Trump believes that the Senate will not impeach him and will "restore regular order, fairness, and due process, all of which were ignored in the House proceedings".

“The President is confident the Senate will restore regular order, fairness, and due process, all of which were ignored in the House proceedings. He is prepared for the next steps and confident that he will be fully exonerated. President Trump will continue to work tirelessly to address the needs and priorities of the American people, as he has since the day he took office,” the statement said on Wednesday.

Today marks the culmination in the House of one of the most shameful political episodes in the history of our Nation. Without a single Republican vote or any proof of wrongdoing, Democrats pushed illegitimate articles of impeachment through the House of Representatives.

Earlier, the US House of Representatives approved two articles of impeachment against Trump. Members of the Democratic Party - which has the majority of seats in the lower section of the government - supported the impeachment late Wednesday, while Republicans opposed the initiative.

On Wednesday evening, the House voted 230 to 197 on charges of abuse of power and 229 to 198 on charges of obstruction of Congress, making Donald Trump the third US president in history to be impeached.

Trump has repeatedly complained that the impeachment inquiry is a sham and represents the continuation of a political witch hunt by Democrats in an attempt to negate the results of the 2016 US presidential election.

The impeachment process is dominating headlines in the United States, but some view it as an effort to turn public attention away from potentially even more damaging scandals.

Ryan Cristian, the founder and editor of The Last American Vagabond, says: “I find the entire fiasco to be a major distraction from many other far more important topics, such as the ‘Afghanistan Papers’ that the entirety of MSM have clearly been told to ignore, or the OPCW leaks, whistleblowers and now 20 inspectors that all say the US government pressured the OPCW to lie, and used that lie to bomb a sovereign nation.”

“On the impeachment vote itself, I think it is pretty clear to most that even if Trump gets impeached that he will not be removed from office by the Senate. So this is all about political moves to manipulate 2020. Meanwhile, all the things that Americans really care about, and really need (such as clean water, affordable healthcare, social programmes and school books from after 1975) are ignored so they can vie for power at the expense of the very people they claim to fight for.”

The Republican-controlled Senate is reportedly expected to start a formal impeachment trial to decide whether to remove Trump from office in the coming weeks.

Journalist and author Daniel Lazare argues that the impeachment process will deepen the constitutional criris rather then resolve it.

“In accusing Trump of abusing his powers and overstepping his bounds, one Democrat after another emphasised that the US is a system of checks and balances and separation of powers. But that’s the problem,” he says. “The US system separates power so evenly among four power centers — the House, Senate, Supreme Court, and presidency — that all must align perfectly for anything to get done. Since this rarely happens, gridlock is the norm.”

“This gridlock is likely to manifest itself in the Senate next year if Republican Majority Leader Mitch McConnell opts for a protracted trial with witness testimony (he has so far rejected calls from the Democrats to allow witnesses but could change his heart under pressure from either Trump or the Dems).

What will happen next?

“In response, Republicans will respond by subpoenaing a slew of witnesses such as Joe and Hunter Biden and perhaps House intelligence committee chairman Adam Schiff and use them to drive Dems up a wall.  McConnell has warned that the witness battle will be one of ‘mutually assured destruction.’ It’s true. But the victims will not only be the Democrats and Republicans, but the entire congressional system as well.”

Lazare suggests that the impeachment will more likely benefit Trump than hurt him, and that this rarely-used practice could “become the norm” as Republicans might seek revenge for putting Trump through the process.  “This means that every presidency will end in paralysis and warfare,” he concludes.

Here We Go Again: US House to Vote on Impeachment But What Does it Mean?