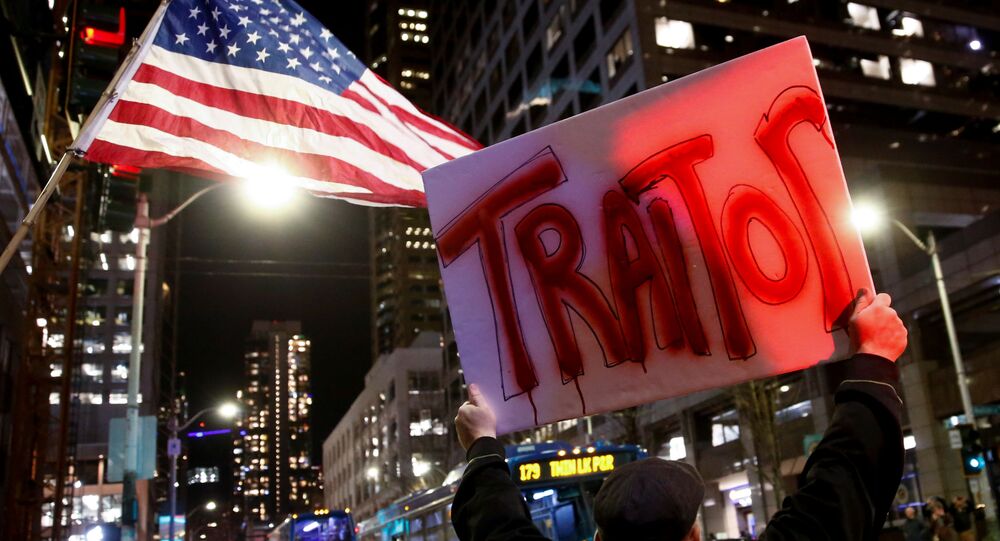 The House of Representatives is set to vote on two articles of impeachment against President Trump. The impeachment proceedings were launched in September amid allegations that he abused his power during his talks with Ukrainian President Zelensky, pressuring him to investigate Joe Biden, Trump's likely rival in the 2020 presidential vote.

Protesters are holding rallies against US President Donald Trump in Washington, DC on 18 December, where a crucial vote on Trump's impeachment is set to take place.

Representatives of National Association for the Advancement of Coloured People (NAACP), Public Citizen and MoveOn led the way at the rally in support of impeaching Trump and removing him from office.

Reggie Hubbard, a congressional liaison and political strategist for MoveOn, choreographed some of the slogans for the crowd, including "No One is Above the Law", "Impeach and Remove", and "This is What Democracy Looks Like".

Mere steps away, another group of protesters gathered in support of the US president. The protesters echoed claims that the impeachment proceedings are a sham designed to negate the will of the American people as expressed in the 2016 election.

The conservative advocacy group Public Advocate of the United States said that it plans to march around Washington singing impeachment-themed Christmas carols such as "Rudy the Hard-Nosed Lawyer" and "12 Days of Hearings".

There were no disturbances during the events amid an increased police presence on Capitol Hill.

In September, House Democrats started an impeachment inquiry after a whistleblower complaint alleged that Trump had pressured Ukrainian President Volodymyr Zelensky to probe his potential political rival in the 2020 presidential campaign – Joe Biden – for corruption.

Trump has repeatedly complained that the impeachment inquiry is a sham and a political witch hunt by Democrats.

If the House of Representatives impeaches Trump, he will face a trial in the Republican-controlled Senate.