The disgraced financier, who killed himself in prison, awaiting trial over sex trafficking allegations, developed a special bond with his ex-girlfriend and fellow billionaire hedge-fund manager’s child, Business Insider reports. His affection is said to have been so strong that he wanted her to inherit his fortune.

Jeffrey Epstein, found guilty of soliciting an underage girl for prostitution in 2008, considered marrying his friends’ daughter Celina Dubin, who was 19 years old at the time, Business Insider reports. According to the outlet, he told his associates in 2014 that if he was ever to wed it would be the child of billionaire hedge-fund manager Glenn Dubin and Miss Sweden Eva Andersson-Dubin, who dated the financier for 11 years in the 80s-90s.

Although there is no evidence that the convicted paedophile was romantically involved with the much younger heiress, there are reports about his affection for the young woman, who even allegedly called him “Uncle Jeff” once. The idea of marrying Celina Dubin is said to have had financial reasons, as it could have helped her to inherit Epstein’s fortune without paying taxes.

In 2014, when Epstein reportedly floated the idea, he also made his friends’ daughter a beneficiary of a trust, which reportedly grew to around $50 million in 2019, but took her off the list a year later. The Dubins denied knowing about the trust, similar to the ones allegedly used to pay women in his circle.

Girl Who Never Failed Him

Andersson-Dubin reportedly described him as Celina's “godfather”, while the financier himself reportedly told friends that he was at the hospital when the girl was born and that she was “the only one who never failed him”.
Before that, the Dubins are said to have remained on friendly terms with Epstein even despite him pleading guilty to soliciting a minor for prostitution in 2008. The statements, gathered by the financier’s attorney confirm he was close to his “teen bride”.

The dossier suggested that he had “an especially close relationship with Celina, 12”, who “wrote glowingly of their weekly science lesson when 'Uncle Jeff’, as she calls him, takes time from his personal and business schedule to go over to her apartment and discuss science and mathematics lessons she is learning at school”.

“I got to the class alone. But then soon enough a quick phone call to Uncle Jeff didn't leave me standing there alone for more than 10 minutes. Uncle Jeff substituted for my father that night, and the way he rushed to the class felt exactly like having my father there”, she reportedly wrote.

Epstein’s Money Ties With the Dubins

Apart from reportedly attending the billionaire’s social gatherings and even spending a major holiday together in 2009, Epstein also sent donations to the funds linked with the Dubins. He did not only donate to Eva Andersson-Dubin's breast-cancer organisation in 2009, but also sponsored the Icahn School of Medicine at Mount Sinai and gave $50,000 to Harvard's Hasty Pudding Institute, where Celina Dubin studied medicine.

However, the family reportedly distanced themselves from Epstein following his arrest this July over sex trafficking allegations.

“Glenn saw him perhaps once a year in large group settings and had no business interactions with him whatsoever after 2007. Eva and Celina Dubin accepted less than a handful of invitations to gatherings that included the founder of Microsoft and a DNA pioneer”, their spokesperson said, adding they are “horrified by Jeffrey Epstein's despicable conduct” and that “they would have cut off all ties instantly” if they knew about his behaviour. 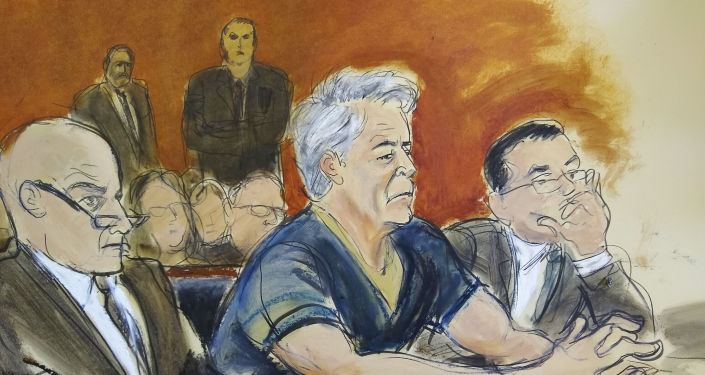 © AP Photo / Elizabeth Williams
Court Documents Expose Jeffrey Epstein's Perverted Escapades With 'Over 100 Young Girls'
At the same time, Glenn Dubin is one of those accused in court documents of having sex with one of the financier’s victims. Besides this, the Dubins are said to have employed an underage girl as a nanny, whom he had solicited for sex - allegations, which they vehemently deny.
...
Reddit
Google+
Blogger
Pinterest
StumbleUpon
Telegram
WhatsApp
93

‘Kind of Intriguing’: Bill Gates Met With Epstein For Years Despite Criminal Past - Report