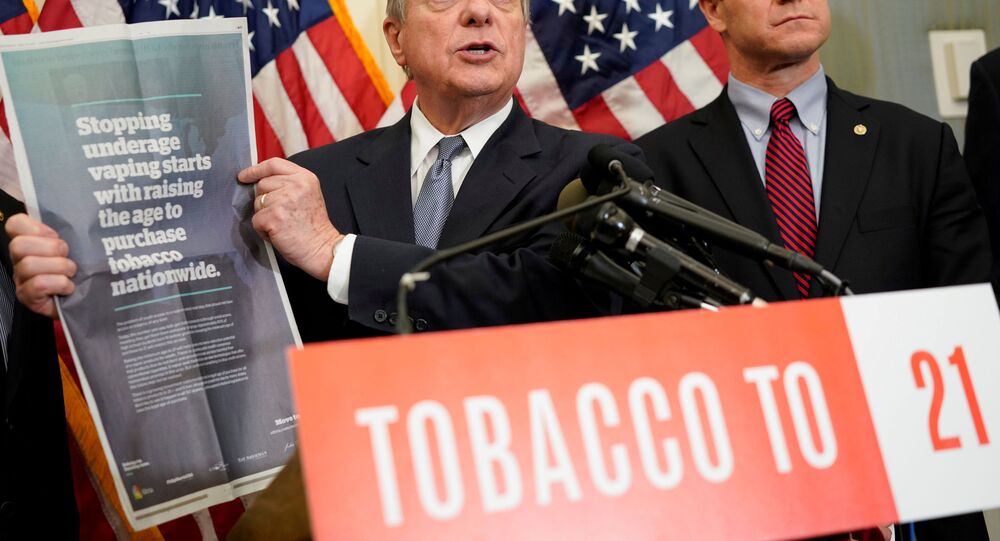 Under federal law the minimum age in the United States to purchase tobacco or vaping products is 18. Although over one-third of US states have raised the sale age to 21, nationwide legislation to raise the purchase age would require congressional approval.

In a rare show of bipartisan support, the US Congress is reportedly ready to agree on a provision in the $1.4 trillion year-end spending bill to raise the national tobacco purchase age to 21, Fox News reported Monday. The Tobacco-Free Youth Act add-on would raise the current age for tobacco products, cigarettes, e-cigarettes and other smoking products from 18 to 21.

The tobacco bill was introduced earlier this year by Senate Majority Leader Mitch McConnell of Kentucky, alongside Democratic Senator Tim Kaine of Virginia. Kentucky, a tobacco-producing state, is one of several that has reportedly seen the growth in vaping-related illnesses and deaths from e-cigarettes, according to Fox News.

McConnell noted that US lawmakers are expected to pass the measure and send it to US President Donald Trump for his signature before the end of the year.

Trump last month proposed raising the minimum age for the purchase of e-cigarette products in the United States to 21, after he came under criticism earlier from legislators for his apparent walk-back on a planned ban on flavored e-cigarettes, which has been identified as a new addiction, particularly among youth.

Trump defended his decision to propose an age limit on vaping products rather than an outright ban, by comparing the effects of illegal liquor consumption during the 1920-1933 prohibition on alcohol in the United States.

© REUTERS / ERIN SCOTT
Netizens Weigh in on Melania Trump’s ‘Commitment’ to Keep E-Cigarettes Out of the Hands of Children
According to the US National Institutes of Health, an estimated 88,000 Americans die annually from alcohol-related causes.

The number of vaping-related deaths in the United States grew to 47 in late November, and nearly 2,300 cases of lung injuries have been reported, according to the Centers for Disease Control and Prevention (CDC).

The CDC also noted that over 6 million middle- and high-school students were thought to have used tobacco products in 2019, adding that e-cigarettes were the most common nicotine-delivery product among Americans of high school age.