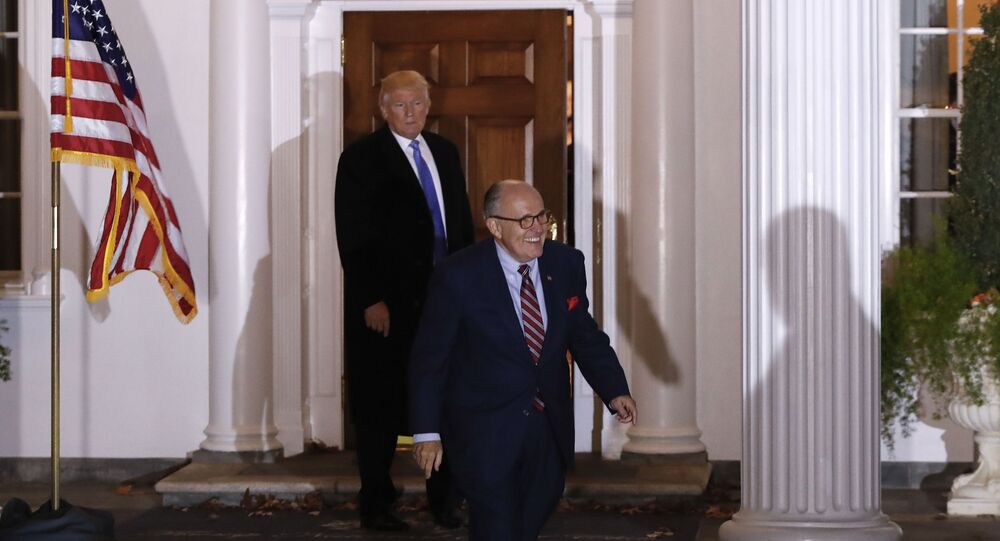 WASHINGTON (Sputnik) - Rudy Giuliani said earlier that during trips to Kiev, Budapest and Vienna he gathered documents that reveal the truth behind the impeachment inquiry. According to US media reports, Giuliani had interviewed former Ukrainian prosecutors Yuriy Lutsenko, Viktor Shokin and Kostiantyn Kulyk for a documentary TV series.

US President Donald Trump told reporters that his personal attorney, Giuliani, undertook a recent fact-finding trip to Ukraine out of love for the United States.

"He [Giuliani] is a great person who loves our country and he does this out of love… He knows what he is doing", Trump said on Tuesday when asked about Giuliani’s trip.

Asked by reporters to what extent he was put in the loop over Giuliani’s journey, Trump said, "Not too much", adding that Giuliani is a "great crime fighter".

"He sees what goes on. He sees what's happening. He sees all of the hoax that happens when they talk about impeachment hoax or the Russian collusion delusion. And he sees it and he's a -- he's a great gentleman. And he was, again, the greatest mayor in the history of New York, and probably the greatest crime fighter in the last 50 years. He knows what he's doing", Trump said.

This week Trump is expected to become the third US President in history to face an impeachment vote in the House of Representatives.

© AP Photo / Jacquelyn Martin
White House Reportedly Limits Access to Trump's Foreign Leader Calls in Wake of Ukraine Scandal
The impeachment inquiry was launched by House Democrats in September after a whistle-blower complaint alleged that Trump pressured Ukrainian President Volodymyr Zelensky to probe his political rival, Joe Biden, and his son, Hunter, who once sat on the board of the Ukrainian energy company Burisma.

If the lower chamber of Congress impeaches Trump, he will then face a trial in the Republican-majority Senate. Trump has said the impeachment inquiry as a sham and another political witch hunt launched by Democrats.