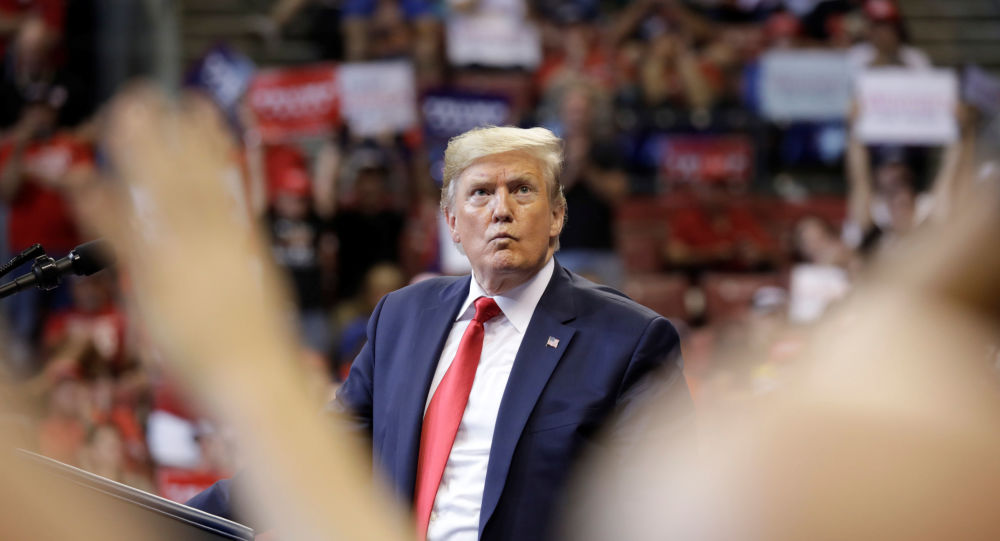 'POTUS Gets a Do-Over': Twitterati Cracks Up on Seeing ‘Trump President 4Eva’ Meme

The meme sporting Trump symbolically stepping into his second, third, fourth, etc. terms has gathered a crowd of commenters, with many giving the made-up scenario a thumbs-up. Some, however, found it hard to view the photoshopped clip as a hilarious joke.

With presidential campaigns in full swing, the White House Director of Social Media has posted a video of unfurling TIME covers with Trump banners that look identical except the year on them. Trump himself is pictured deep in thought, while casting a glance on the banners, to the slightly menacing sounds of Edvard Grieg’s suite from “Per Gynt".

“Kind of like the 1000 year Reich", one reacted laughing, with others opting for memes to visually render how much fun they’ve gotten from this:

Greatest meme in the history of the internet!

“Best laugh I have had all day - you are hilarious! Thanks for the giggle", someone posted, while another pro-MAGA netizen lamented his “whole first term” being “piddled off with their Hoax”:

Dan, I say our @POTUS gets a do-over. How about you? They have piddled off his whole first term with their #Hoax. So let's start all over and give him another 8 years. @realDonaldTrump

Some came up with a sobering comment explaining why the proposed scenario is improbable:

Presidential term limits are set by a constitutional ammendment.

What you're suggesting is illegal.

… whereas one suggested “there are no limits for this freak":

No limits for this freak.

“You'll be lucky to make it through next year", one commenter weighed in apparently referencing the ongoing impeachment probe, while another even blasted the whole business about Trump’s possible re-election as  a "cult":

However, supportive comments were made in abundance:

America First, America First! #PresidentTrump pic.twitter.com/jOhs0AC4Yf
I don't believe a majority of America support the #partisan attack we're witnessing on this Presidency.
We're living at a #CriticalMoment in #history!

One even cheekily visualised what “Trump Infiniti” may look like:

“If we can’t have the actual Donald J Trump more than eight years, let’s hope we have a long string of Presidents cut from the same cloth!” a user stated, with another retorting straight away:

Or we could purchase better quality cloth that’ll last longer and work better.

Trump has repeatedly lambasted the ongoing proceedings against him that have recently relocated from the House Intelligence Committee to the Judiciary Committee - a body that will hand down a verdict on whether the president committed any wrongdoing.

Judiciary Committee head Jerry Nadler released a report on the constitutional grounds for impeaching POTUS on 7 December, with the next round of impeachment hearings beginning on 9 December.

The report is viewed as an appendix to the general impeachment guidelines, which explain when and how a US president can be impeached and what constitutes a possible abuse of power. It largely backed POTUS’s accusations of the Democrats of attempting to alter the rules to meet their needs.

However, it justified the Democrats’ decision to kick-start the impeachment, with the row centring around Trump’s request to investigate the Biden family's alleged corruption, ahead of the 2020 vote.