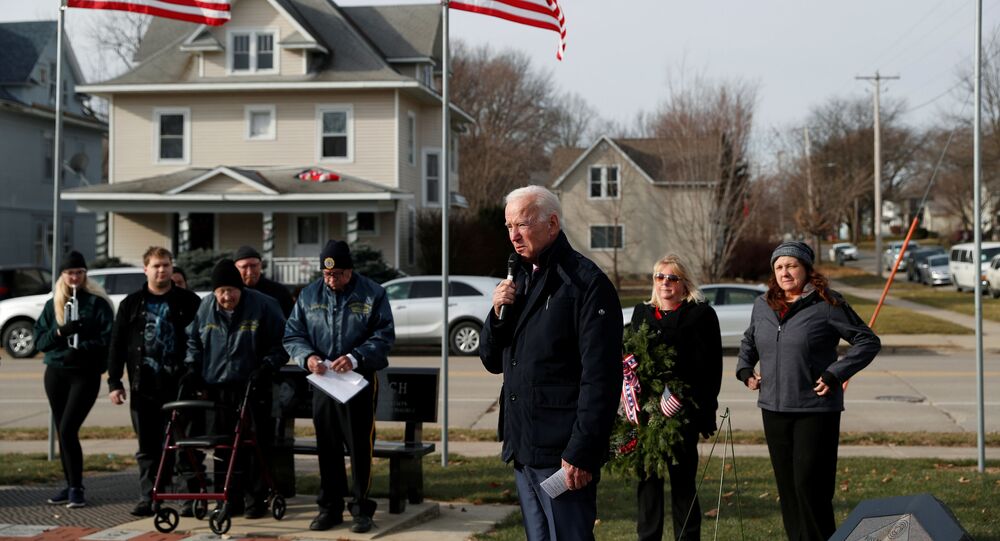 US Democratic presidential candidate Joe Biden has been campaigning on fixing the American immigration system, vowing to "secure our border and enforce our laws without tossing aside our values, our principles, and our humanity".

In an interview aired earlier this week by the US-based Telemundo broadcaster, former US Vice President Joe Biden claimed he has no regrets about thousands of deportations during his eight-year tenure in the Obama administration.

“The Obama-Biden legacy includes more than 3 million people deported in the years you were in power [...] Do you-- should you be apologizing for anything?", a reporter asked Biden.

"No. I think what we should be doing is acknowledging that comparing what President Obama did and what Trump did is night and day", Biden replied, adding through the reporter's attempts to interrupt the former vice president, "that was what the law was at the time". After, Biden turned the conversation onto the issue of Deferred Action for Childhood Arrivals (DACA) and the Republican role in domestic American policy.

The Telemundo reporter, however, tried to get an apology from Biden for deportations while he was the White House understudy, alleging that the Obama administration created the legislative basis which the Trump administration has used to widen immigration enforcement and separate immigrant families.

"Nothing”, Biden replied to the correspondent's call for an apology, adding that “what happens is, we went forward and did the single best the president was able to do at the moment. And when there was no willingness to work to actually do something serious, they moved in a direction that took it beyond anything anyone else has ever done”.

According to official data, some 1,8 million were deported from US soil in the first three years of the Obama administration.

One of the main issues in Trump's 2016 presidential campaign was illegal immigrants - an issue which sparked heated debate among the Dems and the GOP, with Biden often spearheading verbal attacks on Trump over his handling the matter.

Since taking the Oval Office Trump has not, however, changed his stance on the issue. Statistics during the Obama-era exceed numbers generated by the Trump administration - about 800,000 so far - even though the president has imposed several restrictive measures that have made life for illegal migrants increasingly complicated.

In November, the Trump administration implemented a new asylum rule to send asylum-seeking migrants from Guatemala, El Salvador or Honduras back to their origin countries as part of bilateral agreements with each nation.

Neighboring Mexico has been also facing pressure from the United States over the influx of illegal Latin American migrants that cross through the Mexican border. In June, the two nations agreed on a package of measures that would see Mexico curb migrant flows in exchange for the suspension of planned US tariffs on imports.

© Wikipedia / Wikimedia Commons
Mexico Prepares to Receive 'Mother of Caravans' of 20,000 Migrants Heading to US
As part of the deal, Mexico has deployed the National Guard to its southern border and throughout the country in order to hinder the migrant flow from Central America. In turn, the United States has begun returning asylum seekers to Mexico, where they will wait for decisions on their cases.

Last year, Trump called the surge of arrivals from Central American a "crisis" and declared a national emergency in an unsuccessful attempt to secure state funding to build a 2000-mile wall on the border with Mexico.

The US military was subsequently involved in settling the crisis. The Pentagon, at the request of the Trump administration, has deployed some 3,000 troops to the border to curb the flow of illegal migrants through the US-Mexico border, assisting understaffed border agents who have reportedly repelled several aggressive breakthrough attempts.