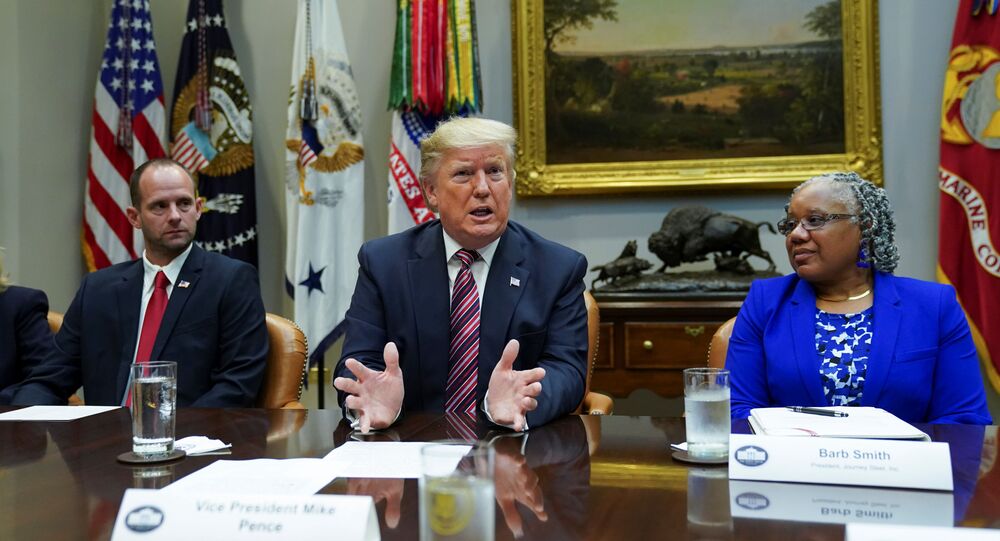 US President Donald Trump is reportedly known for his tendency to arbitrarily reform, cancel or roll back rules and regulations that were previously painstakingly detailed by presidential predecessors and even his own staff.

“We have a situation where we’re looking very strongly at sinks and showers, and other elements of bathrooms [...] You turn the faucet on […] And you don’t get any water. They take a shower and water comes dripping out”, Trump said, cited by The Hill, during a small business roundtable at the White House.

Trump expresses frustration about water efficiency, says sinks don’t have enough pressure and people have to flush toilets multiple times. He says he has directed the EPA to look at opening up water standards. It’s called rain, he says, referring to states with lots of water. pic.twitter.com/pwvzqULeGB

​Trump demonstrated his knowledge by introducing the latest data, although not disclosing the sources that apparently allowed him to stun officials from the Environmental Protection Agency (EPA).

"People are flushing toilets 10 times, 15 times, as opposed to once. They end up using more water. So EPA is looking at that”, Trump asserted, cited by The Hill.

The US president also said that some bathroom fixtures slow water to a trickle.

“You can’t wash your hands practically, there’s so little water comes out of the faucet, and the end result is you leave the faucet on and it takes you much longer to wash your hands, you end up using the same amount of water”, Trump lamented.

© AP Photo / Naomi Blinick/USFWS Volunteer
Trump Rescinds Obama-Era Rule for GMO Crop Use in Natural Wildlife Refuge
The discussion of toilet and bathroom water issues reportedly followed a proposal for the Trump administration to change the lightbulbs in some rooms in the White House, because those bulbs purportedly "gives an orange look".

"The new bulb is many times more expensive, and, I hate to say it, it doesn't make you look as good. Of course, being a vain person that's very important to me. It gives you an orange look. I don't want an orange look", Trump said earlier on Friday, cited by The Hill.

Trump Administration to Cut US Financial Contribution to NATO - Report