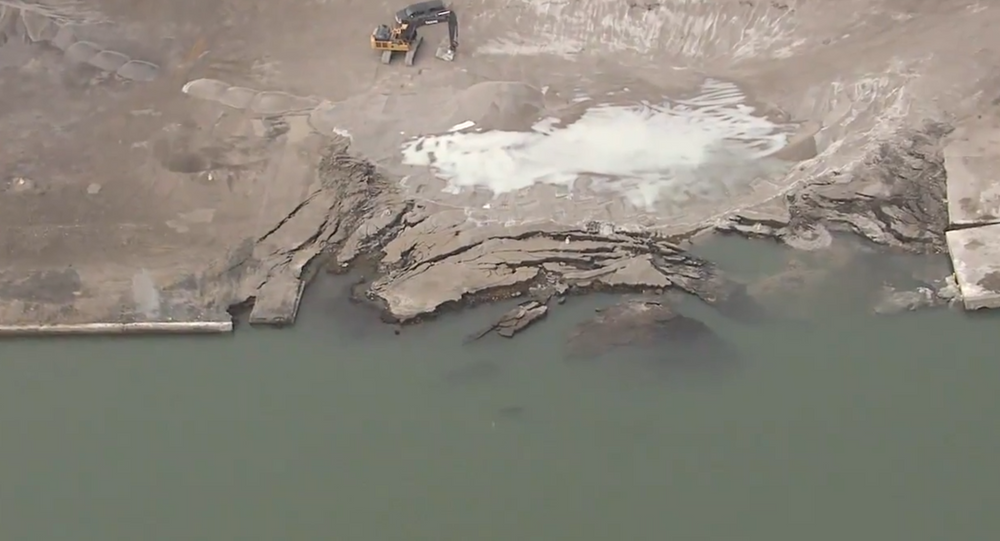 Testing Underway After Uranium-Contaminated Property Collapsed Into US, Canadian River

Multinational concerns of radiation seeping into drinking water have arisen after the collapse of a site flagged by the US government for uranium contamination went undetected for several days due to the recent holiday weekend.

The Detroit Dock, which resides on land leased by Detroit Bulk Storage, partially collapsed into the Detroit River over the Thanksgiving weekend and is now the concern of both US and Canadian officials.

The shoreline property has been listed for decades as contaminated land by the US Department of Energy and Environmental Protection Agency due to its handling of “uranium and other dangerous chemicals” back in the 1940s, according to the Windsor Star, which broke the story. The manufacturing site, then known as Revere Copper and Brass, was subcontracted to construct the world’s first atomic bomb in the 1940s and also rolled uranium rods in the 1950s.

The Windsor Star reported the site collapsed into the river on November 26 due to an overload of aggregate piles, but, because of the Thanksgiving holiday, the incident was not detected by state or federal environmental agencies for some time.

“Any time the Michigan Department of Environment, Great Lakes, and Energy [Michigan EGLE] learns of incidents such as the one at the Revere Copper site in Detroit, staff is greatly concerned about the impact on water quality and the public,” Michigan EGLE spokesman Nick Assendelft said on Wednesday, as reported by the outlet.

He went on to say that the agency would begin investigating the matter and “and determine what, if any, obligations the property’s owner has, before we decide our next steps.”

Without going into detail on the site’s contamination status, Michigan’s Great Lakes Water Authority (GLWA) announced Friday that it has hired a third party laboratory to test the Detroit River’s water quality and requested an “expedited turnaround” on the results.

Michigan EGLE, in a December 6 Twitter post, also revealed that results would be forthcoming, adding that previous tests conducted at the site “showed only background levels of radiation.”

.@MichiganEGLE is on site again at the location of the Detroit River sediment collapse this morning. We will share testing results as they are available. Previous testing at the site, performed after it was remediated, showed only backround levels of radiation.

It’s not clear whether the Michigan EGLE and GLWA are referencing the same investigation.

Though the GLWA’s statement said the authority “does not believe there is any danger of this incident impacting water quality” due to it not being “in the direct flow stream of the river,” Canadian Member of Parliament Brian Masse personally delivered a letter calling for a binational investigation of the collapse to Jonathan Wilkinson, Canada’s minister of environment and climate change.

“An immediate study should be conducted on the dangers presented to the Detroit waterways and Great Lakes region. Forty million people use the Great Lakes for drinking water, and the ecosystem is already fragile. Any potential threat should be investigated immediately on both sides of the border,” Masse said in a statement issued publicly on Thursday, also expressing concern that the "site is currently rated high for contamination because of the residual contamination present."