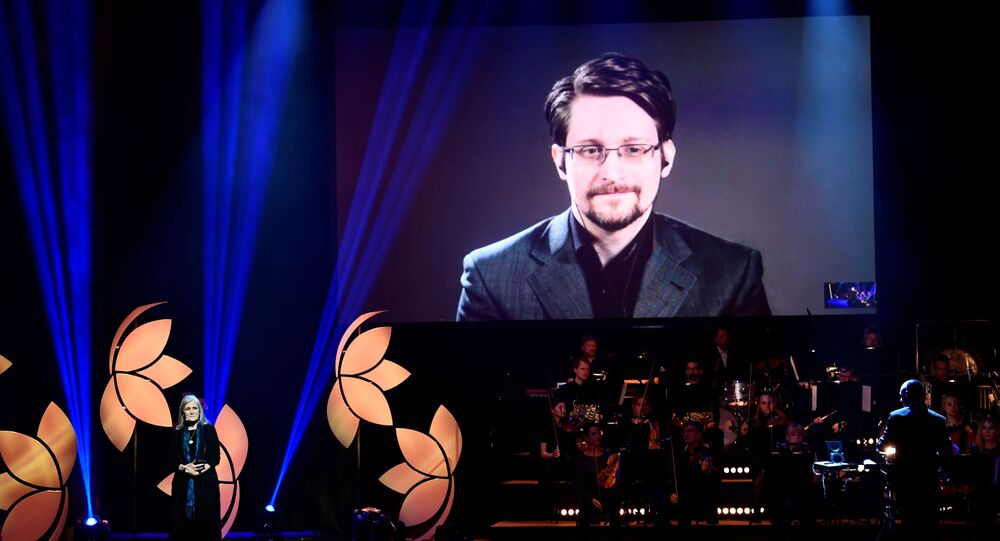 National Security Agency whistle-blower Edward Snowden exposed the global mass surveillance efforts used by the United States and some of its closest allies. He is now hiding in Russia from US prosecutors, who want him on charges relating to the Espionage Act – the same law under which Chelsea Manning and Julian Assange were charged.

Edward Snowden has stood up for Julian Assange, a fellow whistle-blower who has incurred the wrath of US authorities over damning information leaks.

On Wednesday, Snowden appeared in Stockholm by video link from Moscow in front of a live audience at the Right Livelihood Awards, dubbed the alternative “Nobel Prize” and given to people and organisations who defend human rights.

‘I Would Die in Prison’

Snowden himself won the award in 2014 for leaking a trove of classified data from the US National Security Agency (NSA) about the illegal surveillance practices secretly pursued by the NSA and its partners in the Five Eyes Intelligence Alliance.

“There is certainly no question by any legal expert or even political opinion maker that what I face in the United States is an extraordinary process of what I believe internationally is well-recognised as persecution rather than prosecution,” he said on the live stream. “The potential sentence and the likely sentence for telling the truth, which the government does not contest is what happened here, is that I would die in prison.”

He was then asked to comment on the cases of Chelsea Manning and Julian Assange. Both have been charged in the US (Manning convicted and Assange now fighting extradition from Britain) for leaking highly-classified military and diplomatic documents exposing US crimes in Iraq and Afghanistan, as well as the indefinite detention of prisoners at Guantanamo.

Snowden said that the US crackdown on whistle-blowers actually began in the early ‘70s, when military analyst Daniel Ellsberg leaked to the press a top-secret Pentagon study on US involvement in Vietnam, known as the Pentagon Papers.

That report showed that the US government had secretly helped overthrow South Vietnam’s President Ngo Dinh Diem in 1963 and concealed the true scope of its bombings of North Vietnam, as well as attacks in neighbouring Cambodia and Laos. Ellsberg faced charges of espionage, theft and conspiracy, which were eventually dismissed.

All of them – Snowden, Assange, Manning and Ellsberg – were charged under the same Espionage Act of 1917. “This is a special law that absolutely rules out any kind of fair trial going back to the 1970s,” Snowden said.

He recounted: “When Ellsberg tried to tell the jury why he did what he did, his lawyer asked him, ‘Mr. Ellsberg, why did you copy the Pentagon Papers?’ — which was the secret history of the U.S.’s true involvement in the Vietnam War — the prosecutor for the government said, ‘Objection! This is not something the jury is allowed to hear.’

“And the judge agreed with it. He silenced Ellsberg. And he silenced our ability to hear why these things were done, and for the jury to consider not only was this legal, but was it moral.

He continued: “And this I think is the sad history of the United States government’s relationship to the press in the last decade. They have been more and more concerned with what is legal [rather] than what is moral.”

‘A War on Journalism’

Snowden has repeatedly criticised the Espionage Act for stripping the whistle-blowers of the possibility of citing the public value of their disclosures in their defence.

“And now under the Trump administration, we have taken one more step,” he added. “We have gone from the United States government’s war on whistle-blowers to now a war on journalism with the indictment of Julian Assange for what even the government itself admits was work related to journalism.”

“And this I think is a dangerous, dangerous thing, not just for us, not just for Julian Assange, but for the world and the future. If we allow developed democracies to imprison their political critics and dissidents, the people who call into question the legality, the propriety, and the morality of their policies and the prosecution of their wars, we will embolden the most authoritarian regimes on Earth.”