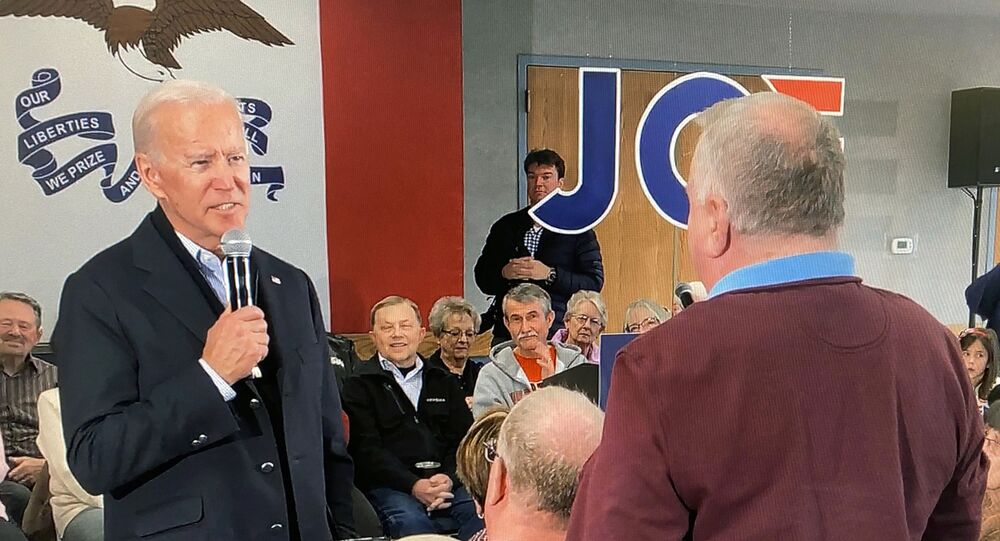 When a voter challenged Democratic presidential candidate Joe Biden over his age and his involvement in his son’s connections to the gas industry in Ukraine, the candidate angrily called the voter “a damn liar” and challenged him to physical and mental feats to prove his vitality.

"We all know Trump has been messing around in Ukraine over there, saying that they want to investigate you,” a man at a town hall in New Hampton, Iowa, asked Biden on Thursday afternoon as he embarked on his so-called "No Malarkey" tour.

“He has no backbone, we know that. But you, on the other hand, sent your son over there to get a job and work for a gas company that he had no experience with gas or nothing in order to get access for the president. So you're selling access to the president just like he was," the man continued. He also said Biden was too old to be president.

Biden quickly shot back, telling the man, "You're a damn liar, man. That's not true. No one has ever said that. No one has said my son has done anything wrong, and I did not on any occasion, and nobody has ever said it."

WATCH: A tense exchange with a voter at ⁦@JoeBiden⁩’s event in New Hampton, IA this morning, where a voter started out by telling Biden he had two problems with him: he was too old, and his son’s work in Ukraine pic.twitter.com/ok7m0ShFPd

​"You see it on the TV? I know you do,” Biden asked him. The man said he’d seen the subject covered on MSNBC.

However, the 77-year-old former vice president, dubbed “Sleepy Joe” by US President Donald Trump, wasn’t going to let the line about his age slide, either. In fact, he offered to prove to the voter, who ABC reported is 86 years old, that he’s as fit as a fiddle.

“By the way, that's why I'm not sedentary ... The reason I'm running is that I've been around a long time, and I know more than most people know, and I can get things done. That's why I'm running," Biden said. "And if you wanna check out my shape on, let's do push-ups together man. Let's run; let's do whatever you want to do. Let's take an IQ test. OK?"

the only thing funnier than biden challenging this guy to a push-up competition is that they both are holding the mics way too close to their mouths the entire time pic.twitter.com/ClTJbf16qB

​Then, when the man said he wouldn’t be voting for Biden, the candidate shot back, "Of course you're not; you're too old to vote for me!"

Biden, who was number 2 to former US President Barack Obama from 2009 to 2017, has found these to be common criticisms in recent months. A series of embarrassing tongue-twists by the candidate and chiding from younger candidates to “pass the torch” have put Biden on the defensive, and the impeachment inquiry into Trump has unearthed the questionable relationship he had with Kiev while still in office, when he pressured the Ukrainian government to end an anti-corruption probe of the gas company Burisma. Biden’s son Hunter sat on Burisma’s board at the time.

​Biden previously went off on a reporter who asked about the issue in October.

"How was your role as vice president in charge of policy in Ukraine and your son's job in Ukraine, how is that not a conflict of interest?" Biden was asked at a Service Employees International Union (SEIU) event in Los Angeles.