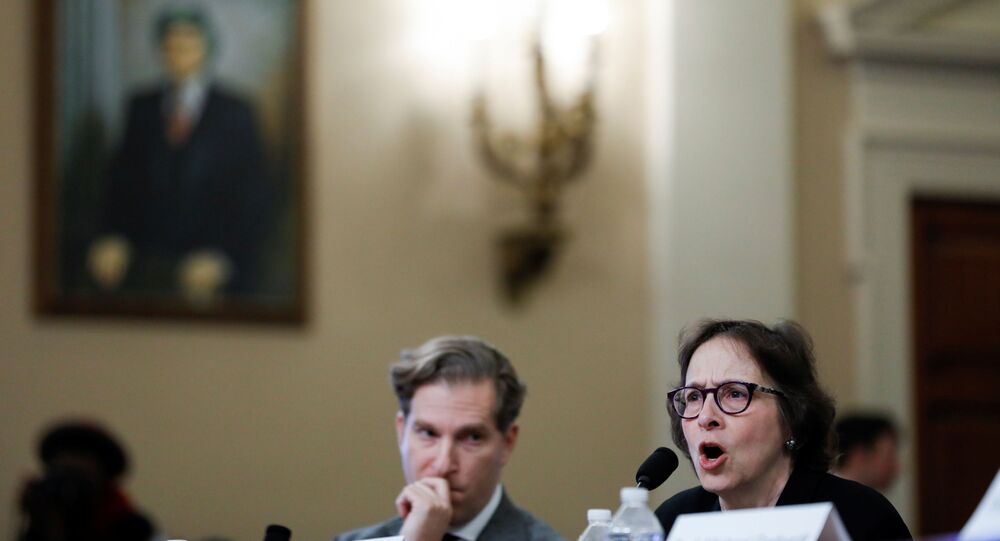 Three of four constitutional law professors told the US House that President Donald Trump committed impeachable offenses in testimony on Wednesday. Stanford University law professor Pamela Karlan noted that Trump had attempted to strong-arm a foreign leader into smearing one of the former's opponents as a means of winning the presidency in 2020.

The wife of the US president, Melania Trump, later in the day slammed Karlan - the third witness selected by Democrats - over mentioning her son Barron during testimony.

"Pamela Karlan, you should be ashamed of your very angry and obviously biased public pandering, and using a child to do it”, the first lady said in a rare tweet on Wednesday evening.

​Barron Trump is the youngest son of the US president and his only child with Melania. The former deputy aide to the US General Attorney, Karlan mentioned Barron’s name on Wednesday when she criticized Trump’s conduct during her witness testimony in front of House Democrats.

“Kings could do no wrong because the King’s word was law, but contrary to what president Trump says, Article II does not give him the power to do anything he wants [...] The Constitution says there can be no titles of nobility, so while the president can name his son Barron, he cannot make him a baron”, Karlan said, cited by The Hill.

The testimony of Stanford Law Professor prompted a backlash among officials from the Trump administration, as well.

“Only in the minds of crazed liberals is it funny to drag a 13-year-old child into the impeachment nonsense [...] Pamela Karlan thought she was being clever and going for laughs, but she instead reinforced for all Americans that Democrats have no boundaries when it comes to their hatred of everything related to President Trump”, Trump campaign national press secretary Kayleigh McEnany said in a statement cited by The Hill.

Wednesday’s hearing, reportedly marked by partisan disagreement over Trump’s conduct toward Ukraine, was the start of the House Judiciary Committee’s process of considering potential articles of impeachment against the US president.

A House Intelligence Committee report issued Tuesday accused Trump of soliciting foreign interference from Ukraine in the 2020 election and in doing so “placed his personal political interests above the national interests of the United States”.

In September, House Democrats launched an impeachment inquiry based on a whistleblower complaint, which alleged that during a 25 July telephone conversation Trump asked Ukrainian President Volodymyr Zelensky to investigate the Bidens involvement in the firing of a Ukrainian prosecutor general who had been probing a gas firm in which Hunter Biden sat on the board. A whistleblower complaint and multiple weeks’ of testimony from US diplomats and others linked to the affair have helped form the basis of the House Democrats’ argument for impeachment.

© AP Photo / Alex Brandon
US House Intel Committee Approves Impeachment Inquiry Report
The White House subsequently declassified what it has claimed to be an unredacted transcript of the notorious July phone conversation. Trump denied any wrongdoing and dubbed the probe another "witch hunt" against him.

In coming days, the Judiciary Committee is expected to draw up articles of impeachment for a final full House vote which could take place before Christmas. A vote to impeach would be followed by a trial in the Republican-led Senate, after which a two-thirds majority vote is required to remove Trump from office.

Trump Says Impeachment Case Should Be Over After Zelensky Denied Wrongdoing